GI Coffehouse : Checking ‘Under the Hood’ in Killeen, Texas 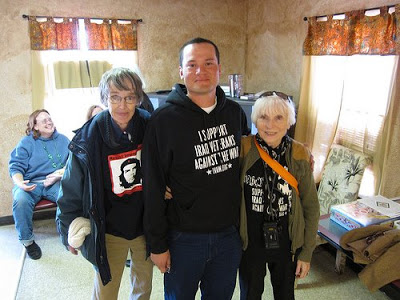 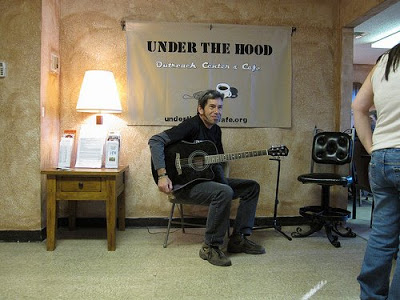 Grand opening of the Under the Hood Cafe in Killeen, Texas. Photos by Carlos Lowry / The Rag Blog.

Under The Hood is an experiment. It’s a labor of love. It’s an antidote to the “divide and conquer” mentality that undergirds war.

March came in like a lion lying down with a lamb. Or maybe the day was about recognizing that the lion and lamb exist together in each of us. In any case, collaboration was the theme on Sunday, March 1, as soldiers and civilians, men and women, children and adults, locals and out-of-towners, seasoned and new organizers gathered to celebrate the opening of a meeting place in Killeen, Texas, on the edge of the world’s largest US Army base. “Under The Hood” is the catchy name of the new coffee house that is up and running near Ft. Hood as a long-wished-for resource for soldiers and military family members who find the culture of silence around military bases detrimental to their health and well-being.

As stated on the café’s website, the purpose of the coffee house is to provide a welcoming setting for the free exchange of ideas and information, as well as offering a family-oriented entertainment space for soldiers and civilians. The house rules encourage talking, flirting, learning and debating, and from what I observed at the opening Sunday, the café is functioning just as it was intended.

The engine propelling Under The Hood is its warm and able manager, Cindy Thomas, a native Texan, military spouse, mother of two young daughters and step-mother of a military-aged son. While her husband was serving a tour in Iraq last year after having been injured there on a previous tour, Cindy looked for support for her own family as well as the military families she saw around her who were dealing with issues involving physical and mental health, housing, education and GI rights.

I first met Cindy in the Fall of 2007 when she walked up to the Café Caffeine in Austin along with her two girls, all of them sporting something pink, to attend a CodePink meeting after having heard about the national group on the Rosie O’Donnell show. By coincidence, as Cindy and her daughters joined us, we were finishing up an interview with a reporter from the Austin American-Statesman just before the official start of our meeting. I was impressed with Cindy’s candid and cogent answers to the reporter’s questions, even though she hardly expected to be interviewed by the press the moment she arrived to meet a new group of women a hundred miles from home.

It was a fortuitous meeting. Our Austin CodePink group already had been actively engaged in outreach to GIs and military families, forming alliances between civilians, soldiers, activists and veterans through several projects in support of GI resisters. Cindy’s outgoing nature and capable organizing skills blended well with the abilities of kindred souls in our group. Together with the fledgling Central Texas Iraq Veterans Against the War, Veterans for Peace and the reinvigorated Movement for a Democratic Society, a committee formed to fundraise and look for a location for a coffee house in Killeen.

In some respects, Under The Hood is a reincarnation of the Oleo Strut, one of the most vibrant of the GI coffee houses that sprang up in the 1960’s as active duty soldiers organized in resistance to the US war in Indochina and in opposition to the use of soldiers to thwart civil rights and antiwar demonstrations in the US.

As described in the history of the Oleo Strut documented by Thomas Cleaver and posted on the Under The Hood website, one of the most awesome acts of resistance by GIs during the Vietnam war was launched from Ft. Hood when 43 decorated African-American GIs refused to board planes destined for the Great Lakes Naval Training Center where they were to be used as backup for Chicago police against demonstrators at the 1968 Democratic National Convention.

The Oleo Strut had opened just a month prior, taking its name and purpose from a mechanical part on a helicopter that functions as a shock absorber. The Oleo Strut distributed its own GI newspaper, “The Fatigue Press,” and became a beehive of activity where soldiers could hang out, organize and mingle in a supportive atmosphere with civilians. The coffee house also hosted poets and musicians, including the renowned Pete Seeger and the as-yet-unknown 16-year old Stevie Ray Vaughn and his blues band.

Under The Hood doesn’t resemble the Oleo Strut much in terms of looks, judging by photographs and accounts of those who were there both Sunday and back in the day. But, there is a strong spirit of life, love, resistance and support in the café that bridges the years while also evolving with the times. I saw it in the tears that photojournalist and Veteran for Peace, Alan Pogue, brushed from his eyes as he took pictures during Sunday’s opening while remembering The Oleo Strut he photographed in its heyday. I saw it in the tears that Cindy brushed from her eyes as she was being presented a medal by members of the Ft. Hood chapter of Iraq Veterans Against the War. On one side of the medal was an engraved portrait of Thomas Paine, who coined the term “Winter Soldier” that Vietnam Veterans Against the War and IVAW adopted. On the other side of the medal was an inscription from the IVAW chapter: “Love and Thanks from Man and Woman.”

Others from CodePink Austin were honored by IVAW, as well, for assistance with the café project in everything from fundraising to painting, carpentry, cleaning, cooking and counseling. CodePink seamstress extraordinaire, Heidi Turpin, made the handsome curtains and banner that adorn the café’s windows and walls. She and her husband, Jim, made the sign that hangs in front of the house and installed the ammunition box that had been transformed into a donations box (bills, not bullets!). Jim, a vegetarian, amiably helped grill chicken and sausages all afternoon for the hungry flock that arrived for the opening. Fran Hanlon, active with CodePink and the GI Rights Hotline, and Alice Embree, active with CodePink and MDS, have served with Cindy in the Ft. Hood Support Network that has powered the project from the beginning.

These folks and other volunteers combined their time and talents to create a welcoming space that is beautiful in both form and function. There are games to play, books to read, films to see, and comfortable places to sit and talk, think and peruse the materials that are made available. There is good light, good coffee and good company. (Check out the slide show of photos taken during the opening by Alice’s husband, Carlos Lowry and posted to the site.)

Under The Hood is an experiment. It’s a labor of love. It’s an antidote to the “divide and conquer” mentality that undergirds war. Soldiers are taught to distrust and separate themselves from civilians, but the coffee house brings soldiers and civilians together. The military is a male-dominated institution, but this coffee house project has been led by women. Children are welcome. Music is welcome. You are welcome, all you lions and lambs, so come on in.