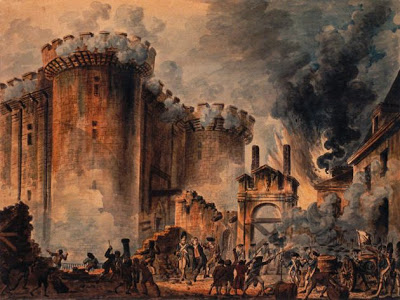 I fear that the average American, including myself, has a very limited knowledge of the events in France between the storming of the Bastille and the final termination of the violence in 1794.

Our conception is of the overthrow of the monarchy and the deaths of Louis XVI and his Queen. We are limited in our knowledge largely by reading, in our youth, The Tale of Two Cities and The Scarlet Pimpernel. Our view was much too narrow.

I recently have been reading Professor Paul R. Harrison’s The Jacobin Republic Under Fire and have become aware that the most bitter dispute which endured for four years was between the Girondins who espoused provincial rights and the Montagnards who favored a strong central government. The adherents on both sides were firm in their convictions and showed no pity for those who disagreed, accusing the opposition of being traitors and enemies of the state.

At one point, early in the spring of 1793, one Pierre Verniand, a Girondinist, addressed the delegates of the National Convention warning that the greatest threat to the Republic lay not in foreign enemies, but rather in those who would manipulate the people in their aspirations for dictatorial power, who would not hesitate once again to unleash the assassins of the prior September in pursuit of their ambitions. M. Verniand, an eloquent orator, was espousing bipartisanship and cooperation to the delegates. The long term upshot was M. Verniand ending his life in the Place de la Concorde on the guillotine! So goes bipartisanship…

At a later date another politician wrote:

“The art of leadership consists of consolidating the attention of the people against a single adversary and taking care that nothing will split up this attention…The leader of genius must have the ability to make different opponents appear as if they belonged to one category. Tell big lies, and do not qualify or concede a point, no matter how wrong you may be. Do not hesitate or stop for reservations. The masses are always more easily corrupted in the deeper strata of their emotional natures than consciously, and thus fall victims to the big lie rather than the small lie, since they themselves often tell small lies but would be ashamed to resort to large-scale falsehoods. Vehemence persuades the masses — the louder the statement the more plausible it seems and passion convinces them. The masses always respond to compelling force… Since they have only a poor acquaintance with abstract ideas their reactions lie more in the domain of the feelings, where the roots of their positive as well as their negative attitudes are implanted.”

This is from Adolph Hitler in Mein Kampf.

Thus the problem we face today in the United States. The domestic brown shirts, led not by an Ernst Roehm, but by a group of lackeys of the corporate establishment, i.e. Rick Scott, Zach Wamp, Glenn Beck, Betsy McCuughey, Rush Limbaugh and John Goodman, and are among us.

These folks are leading a group of zombies, who are not only opposed to the right of decent health care for all, but by a blind hate for a president who is educated, and of another ethnic background than themselves. The issue of health care merely makes a rallying point for their masters, as does the issue of gun rights, fetal integrity, or gay-marriage.

Compounding the problem is no viable leader for the opposition. President Obama should be the man out front but he is playing Faust to the pharmaceutical and banking industries. Other leadership is lacking, largely because in the psyche of progressives is a distrust and antipathy to figures of authority. We prefer civilized discussion and immediately cringe when a figure appears that might unite us all in a common purpose.

We do not follow the pied piper and that historically has been our strength and our weakness. When an authoritarian government takes over the liberals are first to the wall still arguing about academic minutia. We deride such as Sarah Palin or Joe Wurzelbacher. We do not remember that the German S.S. was led by a chicken farmer. Yet, there are issues, however absurd they may be, to be answered regarding health care.

1. “The bill before the House of Representatives encourages abortion.” The House Bills, including HR 676, which the Speaker promises will be debated, have their basis in the long standing drive for single payer/national health care by Physicians for a National Health Program. I have been a member of the group and not once have I seen any reference to abortion in their extensive literature. This abortion issue is pure and simple fraud. As a matter-of-fact the Hyde Amendment forbids any federal funding to be used for abortion; hence, the issue has been settled for a long time.

2. The end of life issues are pure poppy-cock. This reality has been around since civilization developed. The problem was discussed by, among others, Thomas Becket. We are born, we live, we die; that is reality. The culture of The United States has in recent years been averse to facing and discussing the issue of death. Example: in obituaries we do not die, we “pass away,” what ever that means.

However, why the House of Representatives raised this issue I have not the vaguest idea. Any physician should be delighted to sit down with a family and discuss end-of-life issues without being paid by Medicare. Statistics indicate that only 20% of Americans have living wills or medical powers-of-attorney. We are a society that preaches individual; choice, thus it seems reasonable that we should be allowed to be permitted our choice about how to die.

In all states this choice must be written, notarized, or witnessed, and is binding in our final days. It has nothing, absolutely nothing, to do with euthanasia. Another lie, and misrepresentation by the health care opponents, and kept in public view by the idiotic talking heads on TV.

Perhaps the discussion will encourage the intelligent portion of the population to have a living will written to accompany their regular will which at the time of their death indicates disposal of their property. Your physician or attorney can instruct you abouty where to obtain forms to write a living will. In my years of practice of medicine I have seen too many relatives transfixed, and in denial, when the physician says, “Your father is dying. What do you want to do?”

It is unfair to put the onus on the family; this should be decided by the individual, through free choice, before the terminal event. I have witnessed confusion and antagonism created by the death bed decisions when left to the family. The daughter from 2000 miles away, who has not seen her father for 20 years, will be seized by guilt and request “everything be done.” On the other hand there are the heirs, in debt from living over their heads, who might have other opinions! As a matter of fact the “end of life panels” that the opponents of decent health care describe are already here. They are called insurance companies. These beneficent institutions allow at least 18,000 Americans, at a minimum, to die each year for lack of or denied health care.

3. “Obama is a Fascist. Obama is a Socialist.” In this country, these are used as derogatory terms, largely by persons who have not the slightest idea of their meaning. Sort of like calling a person, in more acceptable terms, a son-of-a-bitch. Of course Fascist and Socialist are mutually exclusive. By definition a fascist regime is a right wing government, subsidized by the large corporations, and in alliance with the military. Eaxample, Nazi Germany. A socialist government is hard to find; perhaps the nearest thing to it is in the various Scandinavian Nations where public services, including first rate medical care for all, are incorporated into a society where private enterprise is encouraged, but capitalism purely for the profit of the management, at the expense of the worker, is discouraged.

If our right wing friends want to bring up the USSR as an example they are totally ignorant of history. Lenin and Stalin were theoretical communists; however, Lenin died shortly after taking power, and Stalin had Trotsky assassinated. Under Stalin the USSR was an authoritarian dictatorship, a throw-back to the days of the Czars, with the workers relegated to the level of the serfs under the Russian monarchy.

I now hear Republican senators espousing a plan to give the public a choice of 22 insurance plans, “as we now have.” However, the senators never mentions that some 70% of their premiums, or more, are paid by the federal government. Close to being “socialized medicine” for the politicians. Let us stop this hypocrisy. These folks play on the same lack of knowledge as when they aver that the great physicist, Stephen Hawking, who has had Lou Gehrig’s Disease for many years, would be dead if he was subject to the poor care of the British health system. This, of course, ignores the fact that Dr. Hawking is British and has done quite well for years under the British health system.

The progressives are just not getting their message out to the general public, and it is surely difficult in view of the fact that the mainstream media is largely subsidized by the drug and insurance industries, and allied with the U.S. Chamber of Commerce, as well as the AMA and AARP. One notes that the latter two organizations are for “health care reform” but never indicate favor for a single payer plan or a government option.

Beware! In a CNN article distributed by Common Dreams of, former insurance agency spokesman Wendell Potter tells us how the “Insurance firms drive debate,” and Guy Adams writing in The Independent, a British newspaper, tells the “The brutal truth about Americas Health Care.”

As Congress returns to Washington in September we liberals must make a decision about how to proceed. We must be realistic in our perceptions of the attitude of the general public and be aware of the anatomy of American ignorance as described by Bill Noxid in Information Clearing House, and urge the health care leadership to moderate their discourse as suggested by Professor George Lakoff in TruthOut.

We must head for the streets and congressional offices. We must realize that President Obama now equivocates on health care, as he has avoided any action in response to the coup in Honduras. He continues a futile war in Afghanistan with lame explanations. He seemingly has deserted the progressive cause.

In the end I agree with Dr. Howard Dean and the 60-plus courageous liberal members of The House of Representatives, that a bad bill that covertly concedes more power to the insurance and pharmaceutical cartels would be worse than none at all. I would urge that the liberals in the House vote against a bill that is a farce and a concession to the corporatocracy that dominates our political parties.

Then, hopefully, we could try again in two years.