Support for the Shministim : Concientious Objectors in the Israeli Army 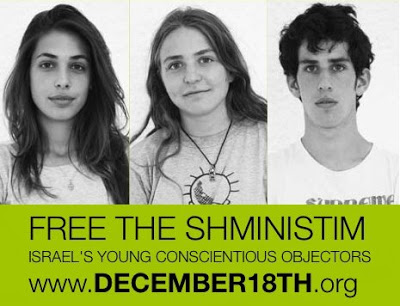 ‘These are young adults, just out of high school, who have managed to break through all the myths that they have been immersed in and figured out for themselves what the Army actually does.’
By Rebecca Vilkomerson / December 19, 2008

It is hard to convey, and impossible to overstate, just how completely saturated Israeli culture is by the heroic image of the Israeli Army. In school, advertisements, marketing campaigns,store discounts, discussions with neighbors, every way you can imagine, the Army is portrayed as the ultimate form of service to the country. When I took my daughter, who is five, to the doctor recently, the doctor began her explanation of how vaccines worked in this way: “you know how Israel has an Army that protects us? Well the vaccines are your body’s army…”

It is simply everywhere.

That is what makes the shministim all the more remarkable. These are young adults, just out of high school, who have managed to break through all the myths that they have been immersed in and figured out for themselves what the Army actually does. Having reached the conclusion that being in the Army would force them to commit immoral actions, they have taken the next obvious—but in no way easy—step of taking action by refusing to serve. All in the face of family pressure, peer pressure and societal pressure that is absolutely intense. They are willing to pay the price, which can and does include jail time, for standing up for what they know is right.

As far as I am concerned, as a mother who is raising two Israeli daughters, they could not be better role models.

So I invited my daughter to join me at the December 18th Day of Action in Solidarity with the Shministim, and I was thrilled that she even agreed to leave her sister’s Chanukah party early to accompany me.

The Day of Action had already attracted welcome attention: a front page article this morning in Haaretz, a moving statement of solidarity from U.S. Army war resisters, and a strongly worded statement of support from Amnesty International.

We were arrayed across the street from the imposing kiriya, the Army headquarters. This was as close as the police would allow us to get. We were a small group, about two hundred people, and this reminded me just how brave and still isolated the refusenik movement in Israel is, and therefore how much the international support really means.

The spirited crowd chanted and yelled support as some of the shministim–Omer Goldman, Sahar Vardi, Raz Bar-David Varon–and the relatives of Yuval Ophir-Auron and Sahar Vardi, took turns bringing the boxes of letters to the locked gates of the kiriya, where eventually two men in suits agreed to take them all inside. They make a nice group, indicative of how a refusenik can come from any part of Israeli society, as Omer’s father made his career high up in the Mossad and Sahar’s family are relentlessly dedicated left-wing activists.

There is a traditional belief in Yiddish culture, which comes from the Jewish mystical tradition, about the lamedvavniks, the thirty six righteous and humble people for whom God saves the world. The shministim are our lamedvavniks-our voice of conscience, our tiny flickering hope of building a society that does not willingly participate in controlling, terrorizing, and killing the Palestinian people-enforcing the checkpoints, demolishing homes, destroying ancient olive groves, building the Wall, confiscating land, enforcing siege and all the other immoral and illegal actions of the occupation.

In the last minutes of the demonstration, I talked briefly with one of the organizers. She said, “you know, there’s a lot more we can do with these letters. We can hand them out on the streets of Tel Aviv. There are all sorts of things we can do.” She was clearly buoyed and excited about building on the movement the Day of Action had generated. And as we got back on our bike to ride home in the still-warm December air, my daughter said to me, “Mama, I never want to be in the Army.”

This is how it can begin. Because what if instead of six, or ten or sixty, six hundred refused? What if 6000 refused? The occupation would be over.

Israeli Conscientious Objectors — Shministim — say why they refuse to serve in the Israeli army that occupies the Palestinians.

For more information, go to Jewish Voice for Peace.