Susie Q and Oh Susanna : Riffing on Music About Women 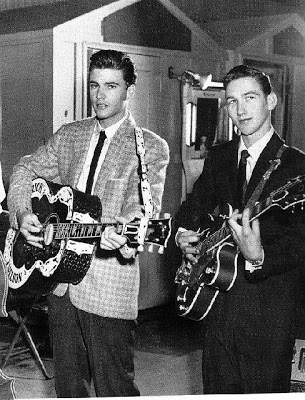 Rick Nelson and James Burton. Image from theexpress-band.com.
From Susanna to Suzie Q:
Don’t you cry for me…

You can gauge the status of women from the music we like to listen to. The fascination with the manner in which Black people have traditionally regarded women has been an obsession for hundreds of years in the USA. Starting with the notoriously racist Minstrel Shows in the early 1800s, mean spirited blackface lampooning of black mannerisms, but also earnest attempts to mimic black music.

“Oh Susanna,” “Camptown Races,” “Bluetail Fly,” Stephen Foster Minstrel Show songs from almost 200 years ago still infuse what’s left of our folk music heritage. “Oh Susanna, don’t you cry for me, for I come from Alabama, with a banjo on my knee.” Or alternately: “I’m going to Louisiana for to see my Suzyanna sing Polly wolly doodle all the day!” Anyway you cut it, our best music comes from those most decidedly un-PC days of cotton picking plantation nostalgia.

One guy who really does come from Louisiana is James Burton. For those of you who don’t know James Burton, he was the white kid who played electric guitar behind Ricky Nelson’s little rock and roll bit at the end of the Ozzie and Harriet Show in the late 1950s.

So? So, it just happened that, before the Beatles, just about the only Rock and Roll you were ever going to see (outside of the super fake American Bandstand) was the weekly Ricky Nelson number. And there it was, in living black and white, a teenage kid (like you and me) playing the hell out of a Fender Telecaster in a domestic comedy show.

Ozzie Nelson, Ricky’s dad, a former Big Band leader, saw the benefit of a (controlled) Rock and Roll display. He even consented to let James Burton live with the (actual) Nelson family as Ricky’s roommate in 1958. Many of Ricky’s best songs were cooked up at home in LA with the teenage Louisiana swamp Rock connection.

Another artist, also from Louisiana, who benefited from his association with James Burton was Dale Hawkins. Dale was jamming with the young Mr. Burton in 1957. The improvised lyrics he set to Burton’s twisting, modal guitar lick were partially lifted from a Howlin’ Wolf vocal line which may have been derived from a 1920s dance craze. In other words, the folk tradition.

“Susie Q” was just about the snarlingist thing anyone had ever heard at that time, with a hypnotic downward bass riff that fought with the overdriven guitar. Definitely the swampiest Rockabilly ever and perhaps James Burton’s finest moment, not withstanding his later long association with Elvis Presley.

At the moment when the folk tradition meets the commercial realities, strange things happen. Of course the actual “author” of “Susie Q,” James Burton, was never credited. The kid who pulled the words out of the air at the time of the recording, Dale Hawkins, got a one third writer’s credit, shared with a record distributor and the wife of a local disc jockey, people none of the actual artists had ever heard of. This of course is all part of the way the music industry protects our hallowed intellectual property rights. 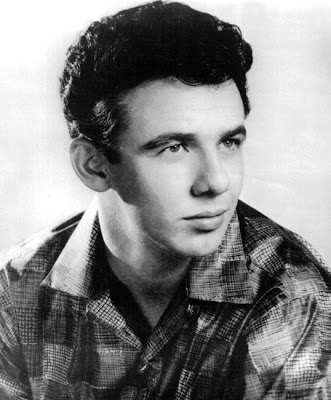 Dale Hawkins. Checker Records publicity photo of singer Dale Hawkins, late 1950s, from the Encyclopedia of Arkansas.
Dale Hawkins toured as a Rockabilly star and prospered for a while. The Rolling Stones and Creedence Clearwater Revival did versions of “Susie Q.” Dale’s cousin Ronnie Hawkins also became a Rockabilly artist and when the genre went cold in the USA, fled to Canada where his late 1950s backing band eventually became The Band.

So from “Oh Susanna” to “Susie Q” we continue to see the fascination with the Black/hipster female role model. She is liberated and sexual, but still inspires respect, reverence and awe. She is now young and white, but somehow still related to the Black Goddess Mother.

Dial forward past the death of the Beatles and the pure blues of Jimi and the Cream to the post punk days of the dreary new wave and we get to meet Dale Hawkins’ duet partner this month in the waiting room of Heaven/whatever, Doug Fieger. Who? “My Sharona”? Oh.. The end product of the “Oh Susanna”-“Susie Q” continuum, one of the many milestones along the road to institutionalized female disrespect and the general disavowal of our Black musical heritage.

Fieger’s group The Knack harkened back to a cynical Brit movie …and How to Get It. The Knack’s leering looks and mock Beatles pose matched the superficiality of the jerky riff that fuelled the underaged girl-as-sex-object hit. After only six minutes of fame (actually months in the top 10) the song and the group disappeared. Now if we could only get the damn thing out of our heads…

One way to do that is to recall “Susie Q,” and of course “Oh Susannah” and perhaps take a moment to ponder where our love affair with the songs that honor Black woman has taken us over the years.

2 Responses to Susie Q and Oh Susanna : Riffing on Music About Women