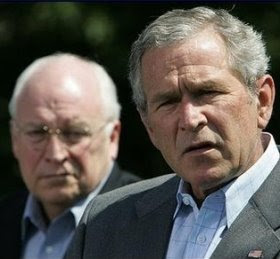 A forged letter linking Saddam Hussein to the Sept. 11, 2001 attacks was ordered on White House stationery and probably came from the office of Vice President Dick Cheney, according to a new transcript of a conversation with the Central Intelligence Agency’s former Deputy Chief of Clandestine Operations Robert Richer.

The transcript was posted Friday by author Ron Suskind of an interview conducted in June. It comes on the heels of denials by both the White House and Richer of a claim Suskind made in his new book, The Way of The World. The book was leaked to Politico’s Mike Allen on Monday, and released Tuesday.

On Tuesday, the White House released a statement on Richer’s behalf. In it, Richer declared, “I never received direction from George Tenet or anyone else in my chain of command to fabricate a document … as outlined in Mr. Suskind’s book.”

The denial, however, directly contradicts Richer’s own remarks in the transcript.

“Now this is from the Vice President’s Office is how you remembered it–not from the president?” Suskind asked.

“No, no, no,” Richer replied, according to the transcript. “What I remember is George [Tenet] saying, ‘we got this from’–basically, from what George said was ‘downtown.'”

“Which is the White House?” Suskind asked.

“Yes,” Richer said. “But he did not–in my memory–never said president, vice president, or NSC. Okay? But now–he may have hinted–just by the way he said it, it would have–cause almost all that stuff came from one place only: Scooter Libby and the shop around the vice president.”

“But he didn’t say that specifically,” Richer added. “I would naturally–I would probably stand on my, basically, my reputation and say it came from the vice president.”

“But there wasn’t anything in the writing that you remember saying the vice president,” Suskind continued.

“It just had the White House stationery.”

Later, Richer added, “You know, if you’ve ever seen the vice president’s stationery, it’s on the White House letterhead. It may have said OVP (Office of the Vice President). I don’t remember that, so I don’t want to mislead you.”

Suskind posted the transcript at his blog, saying, “This posting is contrary to my practice across 25 years as a journalist. But the issues, in this matter, are simply too important to stand as discredited in any way.” It was first picked up by ThinkProgress and Congressional Quarterly’s Jeff Stein.

Suskind’s new book asserts that senior Bush officials ordered the CIA to forge a document “proving” that Saddam Hussein had been trying to manufacture nuclear weapons and was collaborating with al Qaeda. The alleged result was a faked memorandum from then chief of Saddam’s intelligence service Tahir Jalil Habbush dated July 1, 2001, and written to Hussein.

The bogus memo claimed that 9/11 hijacker Mohammed Atta had received training in Baghdad but also discussed the arrival of a “shipment” from Niger, which the Administration claimed had supplied Iraq with yellowcake uranium — based on yet another forged document whose source remains uncertain.

The memo subsequently was treated as fact by the British Sunday Telegraph, and cited by William Safire in his New York Times column, providing fodder for Bush’s efforts to take the US to war.

The Sunday Telegraph cited the main source for its story on Iraq’s 9/11 involvement as Ayad Allawi, a former Baathist who rebelled against Saddam and was appointed a government position after the US occupation.

Nothing in the story explains how an Iraqi politician was privy to the fake memo, but the New York Times column alluded to Allawi and described him as “an Iraqi leader long considered reliable by intelligence agencies.”

“To characterize it right,” Richer also declares in the transcript, “I would say, right: it came to us, George had a raised eyebrow, and basically we passed it on–it was to–and passed this on into the organization. You know, it was: ‘Okay, we gotta do this, but make it go away.’ To be honest with you, I don’t want to make it sound–I for sure don’t want to portray this as George jumping: ‘Okay, this has gotta happen.’ As I remember it–and, again, it’s still vague, so I’ll be very straight with you on this–is it wasn’t that important. It was: ‘This is unbelievable. This is just like all the other garbage we get about . . . I mean Mohammad Atta and links to al Qaeda. ‘Rob,’ you know, ‘do something with this.’ I think it was more like that than: ‘Get this done.'”

“My source also notes that Dick Cheney, who was behind the forgery, hated and mistrusted the Agency and would not have used it for such a sensitive assignment,” the magazine wrote. “Instead, he went to Doug Feith’s Office of Special Plans and asked them to do the job. … It was Feith’s office that produced the letter and then surfaced it to the media in Iraq. Unlike the [Central Intelligence] Agency, the Pentagon had no restrictions on it regarding the production of false information to mislead the public. Indeed, one might argue that Doug Feith’s office specialized in such activity.”