Ted Kennedy and the Politics of Death 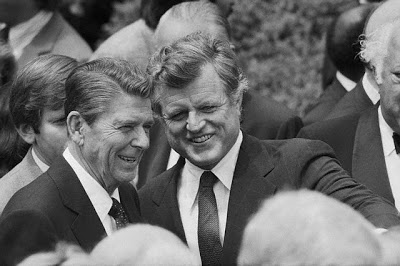 The politics of death serves to reinforce the ‘great person’ theory of history which suggests that historical change is the result of the wise and vigorous and inspired activities of talented individuals, not groups or social movements.

Pray for the dead and fight like hell for the living! — Mother Jones

Political progressives must speak out critically against the rituals of political life that so disenfranchise and mystify us. Along with the use of fear to induce submission (as was discussed in a prior blog essay), spectacles surrounding the deaths of prominent figures captivate our collective attention in ways that derail our political projects.

First, thanks to monopoly media, the deaths of certain political and cultural icons become subjects of 24/7 coverage, extending involvement with the sorrow and pain derived from the loss of esteemed leaders to the exclusion of attention to other issues of the day. Americans are asked to experience the same mourning and suffering as that of the deceased person’s relatives and friends.

Second, despite descriptions of the political activities of beloved public figures, every effort is made to disengage the deceased from history. The politics of death serves to reinforce the “great person” theory of history which suggests that historical change is the result of the wise and vigorous and inspired activities of talented individuals, not groups or social movements.

The politics of death suggests that if the agendas of the deceased are unfulfilled, such as health care reform, we must wait for the next great leader to emerge to see the reform through to fruition. This view, of course, is contradicted by an understanding of history that sees change as resulting from a confluence of context, social movements, inspiring and compelling ideas and visions, resources, and human needs, along with effective and articulate leaders.

Third, as in the case of the death of Senator Ted Kennedy, television, radio, blogosphere, and print media pundits struggle over the construction of self-serving and partially correct images of the person. In the case of the death of Senator Kennedy, Republicans and centrist Democrats chose to emphasize political accomplishments that resulted from his capacity to compromise. He is presented as a senator always willing to create public policies that somehow satisfied the ideologies and interests of politicians with both liberal and conservative perspectives.

From this point of view, Senator Kennedy’s repeated statements of commitment to the underprivileged did not conflict with his desire to work out legislative compromises with those who would never articulate any sympathies for poor and working people. And, disingenuously, as Rachel Maddow suggested, representatives of this point of view even went so far as to suggest that if only Kennedy had been able to participate in deliberations, the Senate would have been able to achieve some kind of health care reform package.

However, it is clear that these same Republicans and Democrats have had no intention of ever supporting any health care reform, however modest. Many of those centrists or conservatives who sincerely reflected upon the loss of a friend, such as Senator Orrin Hatch, were seemingly almost always able to separate their love for their liberal friend from what he stood for.

The ultra-right talk show and FOX crowd often managed to mention that they were not going to talk about Senator Kennedy’s flawed character “out of respect to the family.” Sean Hannity repeated this humane declaration twice in one ten minute segment of his television show after the death of the Senator was announced. Hannity, Limbaugh, Ingraham, and the rest of the right-wing team that so dominate television and radio repeated their ridicule of Senator Kennedy’s character and political significance (Ingraham got ABC guest George Stephanopoulos to agree that Kennedy was not as transformative a political figure in the United States as was Ronald Reagan). They repeatedly warned that liberal Democrats might use the death of Senator Kennedy to rekindle support for health care reform. This, they said, would be scandalous.

Some left commentaries moved in opposite directions. One perspective lionized Senator Kennedy and his fallen brothers by arguing that if the Kennedy’s had not been killed in the 1960s, the United States would have been different. Civil rights legislation would have come more easily. The war in Vietnam would have ended earlier, or maybe never would have been escalated in the first place.

Others on the left concentrated on all the neo-liberal turns Senator Kennedy had taken in his long legislative career arguing that he must be seen as a traitor to the working class. Some commentators come close to blaming Kennedy for the declining fortunes of the labor movement, the shift to neo-liberal economic policies at home, the North American Free Trade Agreement and a host of other shifts in government and public policy, in the end implying that he, almost single-handedly, shaped the horrific economic and political history of the last thirty years.

Ironically, right-wing talk show host Sean Hannity and Mother Jones share a common perspective on the politics of death. Hannity warned right after Kennedy’s death: “and by the way, a lot of this was the politicizing of — remember Paul Wellstone’s death? You know, ‘Let’s do everything for Paul.’ And we’re now being implored to get behind Obamacare because it’s what Ted Kennedy would have wanted.” [The Sean Hannity Show, 8/26/09] Hannity knows that the power of Ted Kennedy today lies in how he is remembered and to Hannity that represents a threat to reaction. The right-wing wants to block any remembrance of the deceased Senator that would hold up his vision of what remains to be achieved: health care, worker rights, living wage jobs, and peace.

But, as Mother Jones suggests, progressives should remember fallen heroes, but not dwell on them as individuals, and “fight like hell” to build a just and humane world.