Ted McLaughlin : Class Conflict and the Disappearance of the Middle Class 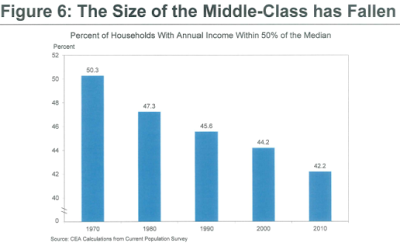 The growing inequality of wealth and income in this country has reached a point where it is now causing a conflict between the rich (the 1%) and the vast majority of Americans.

The graphic above (from Think Progress) shows what has been happening to the American middle class in the last 40 years. To put it bluntly, it is disappearing. While the rich continue to get much richer (with their income growing by over 240% since 1980), the loss of millions of jobs and the stagnant non-growth of wages for most Americans has shrunk the middle class and thrown many more Americans into working class status (if they’re lucky) or even worse, into abject poverty.

The Republican “trickle-down” economic policies, instituted by Ronald Reagan and accelerated by George W. Bush, deregulated financial institutions and encouraged Wall Street to play dangerous games with investor funds — culminating in the loss of trillions of dollars, many millions of jobs, and the start of the most serious recession since the Great Depression. In addition, these same politicians encouraged corporations to outsource millions more American jobs by rewarding them with tax breaks.

The idea was that when the rich and corporations had a lot of money they would use that money to create jobs and the growing wealth would be shared by everyone. It didn’t work, because the wealthy aren’t the real job creators — no matter how much money they have. This is clearly illustrated by our current situation — where the rich have a larger share of the country’s wealth and income since before the Great Depression and American corporations are sitting on trillions of dollars in cash. And yet only a pitiful handful of jobs are being created.

There is only one thing that creates jobs — demand for goods and services. When the working and middle classes have money to spend demand is created, and jobs are created to meet that demand — and all classes in society benefit (including the rich). But Republican policies have taken money from the working and middle classes and given it to the rich. Since the mass of our society no longer has much money to spend, demand is depressed and the recession continues with little or no job creation.

The chairman of the President’s Council of Economic Advisors, Alan Krueger, says the shift in income over the last three decades is the equivalent of moving $1.1 trillion from the 99% to the 1% every single year of those three decades. Is it any wonder that the middle class is disappearing, and we look more like a banana republic every day?

Class distinctions were not important when our economy was working for everyone. But in this current economy, where the rich get richer and everyone else becomes poorer, class is again becoming an issue. It’s become an issue because the gap between the “haves” and “have-nots” is huge, and growing larger all the time.

The Republicans and the 1% call this “class warfare,” but the truth is that the class war has been going on for the last 30 years — and it has been waged by the rich against the rest of America. But Americans are finally waking to realize what has been done to them over the last three decades by the rich (and their Republican lackeys).

A recent survey by the Pew Research Center shows that a full two thirds of the population (66%) now believe there are “strong” or “very strong” class conflicts between the rich and the poor. That’s a jump of 19% over just two years ago, in 2009, when only 47% believed that. And this increased belief in this strong class conflict cuts across all ethnic, political, income, age, and education demographics. In the following list, I give the current percentage who believe this (followed by the 2009 percentage in parentheses):

The growing inequality of wealth and income in this country has reached a point where it is now causing a conflict between the rich (the 1%) and the vast majority of Americans. And it has also caused an erosion of the American dream.

Many no longer believe the old canard that anyone can get rich in America because America has a vibrant class mobility. About 72% of those who say there is a strong class conflict, also say the rich got that way either because they were born into it or because they knew the right people — not because they earned it by working for it.

The rich, through their Republican cohorts, may have started the class war back in 1980, but the rest of America is waking up and starting to fight back. It will be a long and tough fight though, because the rich and the corporations own far too many members of Congress. But that fight can be won — it must be won if democracy is to survive in America.