Ted McLaughlin : Dems are Better for the Stock Market 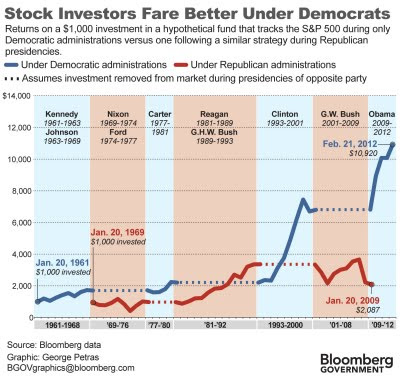 Chart from Bloomberg Businessweek.
Against conventional wisdom:
Stock market does
better under Democrats

The Republicans claim to be the party that best benefits Big Business and Wall Street. And Wall Street (along with the corporate moguls of Big Business) seems to have bought into that idea — so much so that they are donating millions of dollars to super PACs supporting Republican candidates.

In January, the Republican super PACs revealed they had received about $47 million — much of it from the finance and investment industry (Wall Street). From these numbers, it is quite obvious that Wall Street believes it would be best served by returning a Republican to the White House.

So why do the Wall Street bankers favor the Republicans? Because they aren’t as bright as many think they are. They are only thinking about tax policy — not in what is better for them in the long run. They think the lower taxes for the rich touted by Republicans would result in them having more money than under Democratic presidents with the current tax rate. But is that true?

Let’s examine the figures using the current 35% top tax rate for Democratic administrations and a 28% tax rate (proposed by Romney) for Republican administrations, and see which would be best:

As is easily apparent, Wall Street investors would be much better off with a Democrat in the White House — even if they had to pay a higher tax rate. They would still have more money in their bank accounts. And this would be true even if the Democrats eliminated the 15% capital gains tax rate (the rate that current stock gains would be taxed at).

The fact is that all classes in our society would be better off financially with Democrats in the White House — whether poor, rich, or somewhere in between. That leads me to wonder — why would anyone vote Republican?