Paul Krassner : In Praise of Indecency 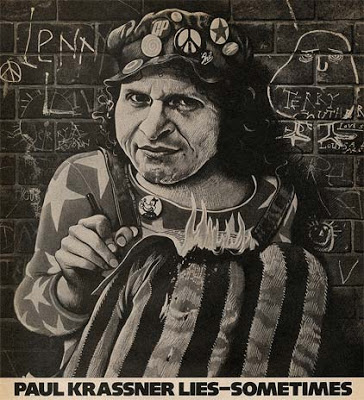 Paul Krassner depicted in Oui Magazine advertisement for an upcoming October 1975 interview. Graffiti includes references to the Realist mascot, Lenny Bruce, and Jerry Rubin. Image from the Realist Archive Project.
In praise of indecency:
Paul Krassner is our ‘Satirist-Laureate’

It’s time our national government at last enshrines its most critical artistic need, that of “Satirist-Laureate.” The first nod must go to the man who has pioneered the idiom in modern America — Paul Krassner.

Since the days of Lenny Bruce, Krassner (a good friend, but no relation) has been poking brilliant fun at every sacred horse’s ass in American politics and culture.

He also remains our cutting edge critic on censorship and its pornographic twin. His two recent books slash to the core of the utter hypocrisy of the government sticking its nose in what we read and write, think and smoke.

Krassner is the godfather of The Realist, the longest running periodical purely devoted to pushing the limits of what may and may not be rendered into print in this country. His infamously horrific description of what Lyndon Johnson may or may not have done to John F. Kennedy’s corpse remains the unsurpassed definition of bad taste and over-the-top satire. The fact that there are still those who believe it to be a true literal description of what actually transpired remains the ultimate monument to both credulity and the lingering effects of illicit psychotropics.

The Realist’s publication of the now-iconic Wallace Wood centerfold portraying our previously iconic Disney characters engaged in various obscene acts also crossed the line between legend and libel. Don’t these characters have lawyers?

When he folded The Realist a few years ago, Paul exhibited a typically Oprahtic (no relation) sense of good timing, quitting while he was well ahead to concentrate on books and performance art. Paul’s autobiography, soon to be reissued for Kindle, reminds us that he coined the term “Yippie!” to describe the thousands of young cultural and political radicals who would descend on Chicago for the 1968 Democratic Convention. In the ensuing conspiracy trial, he was the only witness (that we know of) who testified while under the influence of LSD. 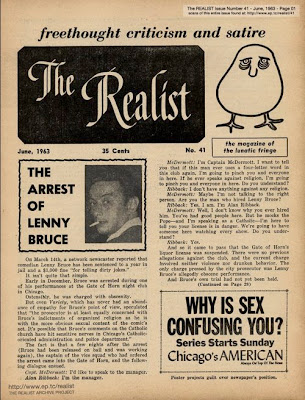 His more recent In Praise of Indecency and Who’s to Say What’s Obscene? are packed with insane anecdotes, including the devastating tale of the totalitarian censorship that destroyed Lenny Bruce. Those would be gut-wrenchingly funny if they weren’t so tragic in their outcome. Today, of course — except for his extraordinary brilliance — what Bruce said and how he said it would be considered mild in your average nightclub.

But after all these years nobody beats Paul’s unerring instinct for irony and the absurd. Krassner’s beat goes from cops fighting each other to cover the sex censorship beat, to drug laws that uniformly imprison the innocent to gays in Congress oppressing gays who aren’t. When speaking in public he will “flap his wings.” If he doesn’t fly, he knows he’s not dreaming.

When you read Paul’s books, crazy as they seem to be, you need to recall your inner Yogi Berra, who reminds you it’s all true because “you can’t make this stuff up.”

Paul Krassner put the “class” in iconoclast, the “mensch” in the unmentionable. Read Paul’s stuff as soon as you can, while there’s still time to laugh.

[Harvey Wasserman’s History of the U.S. is also true, and appears at www.harveywasserman.com with “Thomas Paine’s” Passions of the Potsmoking Patriots, which may or may not be.]

1 Response to Paul Krassner : In Praise of Indecency