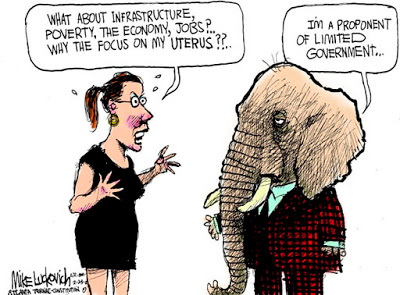 I can understand some of the actions of Republicans, even though I vociferously disagree with them. I understand the racist policies of the party. They probably weren’t going to get very many African-American or Hispanic votes anyway, and those policies play well to their base of white male voters (many of whom still harbor racist fantasies).

In fact, to my great shame as a white male, the Republicans can probably count on a significant majority of the white male vote.

And that is probably where things will still stand when the general election comes around in November. The Republicans will get a majority of the white male vote, and the Democrats will get an even larger share of the minority vote — and the two groups will virtually cancel each other out. But there is another voting group that is even larger than white males or minorities — the women of America.

And if the Republicans want to have a chance of winning in November, they must split the women’s vote with the Democrats. If they can get around 50% of the women’s vote, they stand a very good chance of winning (both the White House and Congress). This is no secret. Anyone with even a rudimentary knowledge of American politics can easily figure this out. That’s why it’s so difficult to understand the recent actions of elected Republican officials (both on the state and federal level).

In recent years, the Republicans have pushed an anti-woman agenda. They have opposed equal pay for women in the workplace. They have pushed a religious agenda that says women should be subordinate to men. And they have opposed the right of women to have control over their own bodies. This has resulted in a small majority of women supporting the Democratic Party, but it has not been a big enough majority to deny Republicans a chance of winning.

But recently the Republicans have doubled-down on their anti-woman actions. They have opposed the extension of the Violence Against Women Act, which protects women against domestic violence. They claim their opposition is due to the law being widened to include domestic violence among same-sex couples and among undocumented immigrants. Even if that is true (and their position ideologically pure), the opposition will do nothing except increase the incidence of domestic violence against women.

They have also made it their party’s position to oppose the free and easy access to contraception for all American women. They have tried to cloak this opposition to contraceptive access as a religious argument. It is not. It is just one more attempt to keep women in a second-class status in this country — barefoot and pregnant and in the kitchen.

There is no doubt that easy access to contraception has been one of the most important developments in women’s fight for equality in the United States — second only to women securing the right to vote. It has given women the ability to have control over their entire lives, and the ability to plan how those lives will unfold. And women know this. Between 95% and 99% of all American women are either using, or have used, contraception (regardless of their religious affiliation).

All the Republicans have done with these new attacks on women is to emphasize their opposition to the equality of women in this society. It is, in effect, a “war on women.” And more women than ever are beginning to realize this.

A new Pew Research Center survey shows that women are abandoning the Republican Party in droves. In the 2008 election, Barack Obama got 56% of the women’s vote (about a 12% gap between Obama and McCain). That was significant, and helped the president to roll to an easy victory. But he could easily do much better among women this year. Look at the current numbers for women voters:

And it’s not just the president who is benefiting from the anti-woman attitude of the GOP. The Democratic Party is doing well also. About 52% of women now identify themselves as Democrats (or leaning Democratic), while only 43% say they are Republicans (or lean toward Republicans). That’s a 9% gap and growing. The gap is larger among single women than married women, but Democrats lead among both groups. Here are those numbers:

The Republicans didn’t just shoot themselves in the foot with their recent anti-woman actions. They’ve filled both feet with bullet holes. Can they turn this around before election day? It’s very doubtful. It would require they abandon the positions they have taken, and that is something the right-wing ideologues running the party are loath to do. Even if they did, I doubt they could convince the women they’ve angered that their change was real (and not just to win an election).

The Republicans have made a serious mistake in waging their war on women. Maybe their biggest mistake ever.