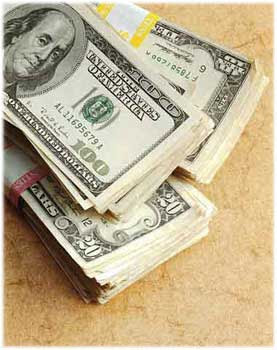 Supporters of the spying bill received twice
the contributions as those against it.
By Mike Lillis / June 24, 2008

When scores of House Democrats joined Republicans last week to reauthorize a controversial White House spying program, many critics attributed that support to election-year jitters. But as liberal voters continue to bash Democrats on the issue, some campaign finance reformers charge that political contributions from the telecom industry, which benefited handsomely under the bill, probably also swayed votes

In an analysis released Tuesday, Maplight.org, a nonprofit campaign finance watchdog group, found that lawmakers voting Friday in support of the wiretap deal averaged roughly twice the donations from the nation’s leading telecoms – Verizon, Sprint and AT&T – over the last three years as those voting against it.

The figures might not have raised eyebrows except that the proposal contained a gift for the industry, effectively granting retroactive legal immunity to the telecoms that enabled the Bush administration’s warrantless eavesdropping program. The immunity provision – blasted by civil libertarians for putting industry concerns above Fourth Amendment rights against search and seizure – rescues the companies from the roughly 40 lawsuits pending against them. Some money-in-politics watchdogs say the connection between the contributions and votes is no accident.

The money-in-politics debate is hardly new to Washington, but it has taken on greater urgency as both political contributions and federal budgets grow larger with each passing year. Under the current system, lawmakers have become ever more reliant on campaign coffers to maintain their hold on power. Industry, meanwhile, is under constant pressure to be at the negotiation table when related legislation is being crafted on Capitol Hill. Money is often the quickest way to gain that seat. This combination of factors has created a near symbiotic relationship between Congress and industry, often lending a sense that business interests take priority over citizens’ concerns.

“It’s not a dollar given and a vote bought,” said Meredith McGehee, policy director at the Campaign Legal Center, a nonprofit campaign finance reform advocate, “but it is a system where large industries can gain influence and direct how policy is decided.”

The shame, McGehee said, is that the campaign-finance system leads to conflict-of-interest questions even when none exist. “That undermines confidence in the legislative process,” she stated.

Mary Boyle, a spokeswoman with Common Cause, echoed the message. “We certainly know that contributions go a long way to gaining access and influence,” she said. “The appearance is that money buys votes.”

Maplight’s analysis, crunched using contribution data from the Center for Responsive Politics, found that the 293 House members voting last week in favor of the wiretapping compromise received, on average, more than double the amount of money as those who voted against it. They got $9,659 from Verizon, AT&T and Sprint between January 2005 and March 2008, while those voting against got $4,810.

But some campaign finance experts warned against linking campaign donations to votes. “It’s way too simplistic just to look at money given to a candidate and claim it’s affected a particular vote,” said Richard L. Hasen, an election specialist at Loyola Law School in Los Angeles. “It’s something that’s often alleged, but much harder to prove.”

“There does seem to be a correlation between telecom money and the way people voted,” Massie Ritsch, spokesman for the Center for Responsive Politics, said in an email, “but as in all cases when you’re following the money, causation is nearly impossible to establish.”

Indeed, in the case of the spying proposal, 94 of the 105 Democrats voting for the bill had supported an earlier House proposal to renew the spying law without granting retroactive immunity to the telecoms. House Speaker Nancy Pelosi (D-Cal.), one of those 94, made clear that she opposed telecom immunity, but was forced to accept a compromise for the sake of passing a bill. The immunity language was a concession to the White House, which threatened to veto any bill without it.

“I do not believe that Congress should be in the business of interfering with ongoing lawsuits and attempting to grant immunity to telecommunications companies that allegedly violated the law,” Pelosi said on the chamber floor last week. “Those companies have not lived up to the standards expected by the American people … They come out of this with a taint.”

In return, Democrats included language previously opposed by the administration, including a clarification that the president has no authority outside the 1978 Foreign Intelligence Surveillance Act to collect foreign-to-domestic communications, even in times of war.

The Senate is expected to pass the bill on Wednesday.

Not all Democrats felt the compromise language was worth the sacrifice of civil liberties.

“I have consistently said that it is not appropriate for Congress to grant these companies immunity for their actions without having an understanding of what it is that they did,” said Rep. John Dingell (D-Mich.), chairman of the House Energy and Commerce Committee. “This is not only because it will hold the telecommunications companies accountable for their actions, but because it is the only way of finding out just how extensive the president’s illegal wiretapping program really was.”

Liberal voters have lit up the blogosphere in agreement, charging that Democrats caved to White House demands at the expense of constitutional rights. Some civil liberties advocates also placed blame on the congressional leaders.

“This is all part of the abuse of power that we’ve seen out of this White House, as well as Congress’ refusal to stand up and perform its constitutional duty to check the executive branch,” said Boyle of Common Cause. “Congress is complicit here.”