‘Terrorist’ : A Word That Comes After ‘Arab’ 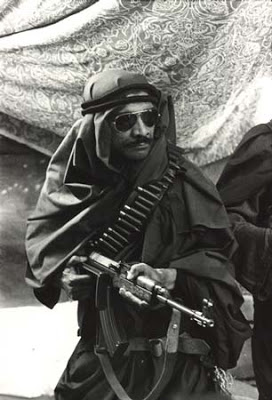 “Arab terrorist,” played by Albert Moses in a Nescafe commercial.

Israel, a nation that was born out of Zionist terrorism, has launched massive airstrikes against targets in Gaza using high-tech weapons produced by the United States, a country that often has aided and abetted terrorism by its client military forces, such as Chile’s Operation Condor and the Nicaraguan contras, and even today harbors right-wing Cuban terrorists implicated in blowing up a civilian airliner.

Yet, with that moral ambiguity excluded from the debate, the justification for the Israeli attacks, which have killed at least 364 people, is the righteous fight against “terrorism,” since Gaza is ruled by the militant Palestinian group, Hamas.

Hamas rose to power in January 2006 through Palestinian elections, which ironically the Bush administration had demanded. However, after Hamas won a parliamentary majority, Israel and the United States denounced the outcome because they deem Hamas a “terrorist organization.”

Hamas then wrested control of Gaza from Fatah, a rival group that once was considered “terrorist” but is now viewed as a U.S.-Israeli partner, so it has been cleansed of the “terrorist” label.

Unwilling to negotiate seriously with Hamas because of its acts of terrorism – which have included firing indiscriminate short-range missiles into southern Israel – the United States and Israel sat back as the humanitarian catastrophe in Gaza worsened, with 1.5 million impoverished Palestinians packed into what amounts to a giant open-air prison.

When Hamas ended a temporary cease-fire on Dec. 19 because of a lack of progress in those negotiations and began lobbing its little missiles into Israel once more, the Israeli government reacted on Saturday with its lethal “shock and awe” firepower – even though no Israelis had been killed by the post-cease-fire missiles launched from Gaza. [Since Saturday, four Israelis have died in more intensive Hamas missile attacks.]

Israel claimed that its smart bombs targeted sites related to the Hamas security forces, including a school for police cadets and even regular policemen walking down the street. But it soon became clear that Israel was taking an expansive view of what was part of the Hamas military infrastructure, with Israeli bombs taking out a television station and a university building as well as killing a significant number of civilians.

As the slaughter continued on Monday, Israeli officials confided to Western journalists that the war plan was to destroy the vast support network of social and other programs that undergird Hamas’s political clout.

“There are many aspects of Hamas, and we are trying to hit the whole spectrum, because everything is connected and everything supports terrorism against Israel,” a senior Israeli military official, who spoke on condition of anonymity, told the Washington Post.

“Hamas’s civilian infrastructure is a very, very sensitive target,” added Matti Steinberg, a former top adviser to Israel’s domestic security service. “If you want to put pressure on them, this is how.” [Washington Post, Dec. 30, 2008]

As a Washington-based reporter for the Associated Press in the 1980s, I once questioned the seeming bias that the U.S.-based wire service applied to its use of the word “terrorist” when covering Middle East issues. A senior AP executive responded to my concerns with a quip. “Terrorist is the word that follows Arab,” he said.

Though meant as a lighthearted riposte, the comment clearly had a great deal of truth to it. It was easy to attach “terrorist” to any Arab attack – even against a military target such as the bombing of the U.S. Marine barracks in Lebanon in 1983 after the Reagan administration had joined hostilities against Muslim forces by having U.S. warships lob shells into Lebanese villages.

But it was understood that different rules on the use of the word “terrorism” applied when the terrorism was coming from “our side.” Then, no American reporter with any sense of career survival would think of injecting the word “terrorist” whatever the justification.

Even historical references to acts of terrorism – such as the brutal practice by American revolutionaries in the 1770s of “tar and feathering” civilians considered sympathetic to the British Crown or the extermination of American Indian tribes – were seen as somehow diluting the moral righteousness against today’s Islamic terrorists and in favor of George W. Bush’s “war on terror.”

Gone, too, from the historical narrative was the fact that militant Zionists employed terrorism as part of their campaign to establish Israel as a Jewish state. The terrorism included killings of British officials who were administering Palestine under an international mandate as well as Palestinians who were driven violently from their land so it could be claimed by Jewish settlers.

One of the most famous of those terrorist attacks was the 1946 bombing of the King David Hotel in Jerusalem where British officials were staying. The attack, which killed 91 people including local residents, was carried out by the Irgun, a terrorist group run by Menachem Begin who later founded the Likud Party and rose to be Israel’s prime minister.

Another veteran of the campaign of Zionist terrorism was Yitzhak Shamir, who also became a Likud leader and eventually prime minister.

In the early 1990s, as I was waiting to interview Shamir at his Tel Aviv office, I was approached by one of his young female assistants who was dressed in a gray and blue smock with a head covering in the traditional Hebrew style.

As we were chatting, she smiled and said in a lilting voice, “Prime Minister Shamir, he was a terrorist, you know.” I responded with a chuckle, “yes, I’m aware of the prime minister’s biography.”

To maintain one’s moral purity in denouncing acts of terror by U.S. enemies, one also needs a large blind spot for recent U.S. history, which implicates U.S. leaders repeatedly in tolerance or acts of terrorism.

For instance, in 1973, after a bloody U.S.-backed coup overthrew the leftist Chilean government, the new regime of Gen. Augusto Pinochet joined with other South American dictatorships to sponsor an international terrorist organization called Operation Condor which assassinated political dissidents around the world.

Operation Condor mounted one of its most audacious actions on the streets of Washington in 1976, when Pinochet’s regime recruited Cuban-American terrorists to detonate a car bomb that killed Chile’s former foreign minister Orlando Letelier and an American co-worker, Ronni Moffitt. The Chilean government’s role immediately was covered up by the CIA, then headed by George H.W. Bush. [For details, see Robert Parry’s Secrecy & Privilege.]

Only weeks later, a Venezuela-based team of right-wing Cubans – under the direction of Orlando Bosch and Luis Posada Carriles – blew a Cubana Airliner out of the sky, killing 73 people. Bosch and Posada, a former CIA operative, were co-founders of CORU, which was described by the FBI as “an anti-Castro terrorist umbrella organization.”

Rebuffing international demands that Bosch and Posada be held accountable for their crimes, the Bushes – George H.W., George W. and Jeb – have all had a hand in making sure these unrepentant terrorists get to live out their golden years in the safety and comfort of the United States.

In the 1980s, Posada even crossed over into another U.S.-backed terrorist organization, the Nicaraguan contras. After escaping from Venezuela, he was put to work in 1985 by Oliver North’s contra-support operation run out of Ronald Reagan’s National Security Council.

The Nicaraguan contras were, in effect, a narco-terrorist organization that partially funded its operations with proceeds from cocaine trafficking, a secret that the Reagan administration worked hard to conceal along with the contras’ record of murder, torture, rape and other crimes in Nicaragua. [See Parry’s Lost History.]

President Reagan joined, too, in fierce PR campaigns to discredit human rights investigators who documented massive atrocities by U.S. allies in Central America in the 1980s – not only the contras, but also the state terrorism of the Salvadoran and Guatemalan security forces, which engaged in wholesale slaughters in villages considered sympathetic to leftist insurgents.

Generally, the major U.S. news outlets treaded very carefully when allegations arose about terrorism by “our side.”

When some brave journalists, like New York Times correspondent Raymond Bonner, wrote about politically motivated killings of civilians in Central America, they faced organized retaliation by right-wing advocacy groups which often succeeded in damaging or destroying the reporters’ careers.

Eventually, the American press corps developed an engrained sense of the double standards. Moral outrage could be expressed when acts of terrorism were committed by U.S. enemies, while studied silence – or nuanced concern – would be in order when the crimes were by U.S. allies.

So, while the U.S. news media had no doubt that the 9/11 terrorist attacks justified invading Afghanistan, there was very little U.S. media criticism when President Bush inflicted his “shock and awe” assault on Iraq, a war that has resulted in hundreds of thousands of Iraqi deaths.

Though many Muslims and others around the world have denounced Bush’s Iraq invasion as “state terrorism,” such a charge would be considered far outside the mainstream in the United States. Instead, Iraqi insurgents are often labeled “terrorists” when they attack U.S. troops inside Iraq. The word “terrorist” has become, in effect, a geopolitical curse word.

Despite the long and bloody history of U.S.-Israeli participation in terrorism, the U.S. news media continues its paradigm of pitting the U.S.-Israeli “good guys” against the Islamic “bad guys.” One side has the moral high ground and the other is in the moral gutter. [For more on the U.S. media’s one-sided approach, see the analysis by Greg Mitchell of Editor & Publisher.]

Any attempt to cite the larger, more ambiguous and more troubling picture draws accusations from defenders of U.S.-Israeli actions, especially the neoconservatives, of what they call “moral equivalence” or “anti-Semitism.”

Yet it is now clear that acquiescence to a double standard on terrorism is not just a violation of journalistic ethics or an act of political cowardice; it is complicity in mass murder. Without the double standard, it is hard to envision how the bloodbaths – in Iraq (since 2003), in Lebanon (in 2006) and in Gaza (today) – would be possible.

Hypocrisy over the word “terrorism” is not an innocent dispute over semantics; it kills.

[Robert Parry broke many of the Iran-Contra stories in the 1980s for the Associated Press and Newsweek.]

1 Response to ‘Terrorist’ : A Word That Comes After ‘Arab’