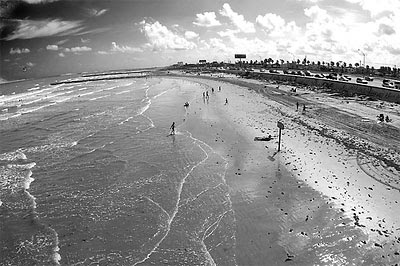 Galveston beach: everyone in!
‘Texans should not be swimming in human and animal waste’
By Jay Root / July 29, 2008

AUSTIN — A day after state officials declared water quality on the rise at Texas beaches, an environmental group reported today it found a 12 percent increase in confirmed outbreaks of dangerous fecal contamination along the coast last year.

The results issued today by Environment Texas, part of a national study released from the Natural Resources Defense Council, reported 532 beach closings and health advisory days in Texas in 2007, up from 473 in 2006. Several beaches near Corpus Christi exceeded maximum bacteria levels by more than 25 percent.

“Texans should not be swimming in human and animal waste,” said Brittany Ballard, citizen outreach director for Environment Texas. “Not only are the beaches polluted, the way they were tested is also failing the American public.”

The national report, entitled Testing the Waters, showed there were 25,571 days in which U.S. beaches were closed or advisories were issued, the second highest level since the National Resources Defense Council began tracking the data gathered from periodic water sampling 18 years ago. About 7 percent of the 2007 tests nationwide showed excessive bacteria levels; in Texas, 9 percent exceeded the standard, according to the study.

“Our beaches are really not that great compared to the rest of the nation,” Ballard said. The group is pushing for expanded sampling and faster tests.

Otherwise, the Corpus Christi area has some of the worst beach water ratings in the study. Of the six beaches that exceeded the national standard for bacteria 25 percent of the time or more in 2007, five were in Nueces County: Cole Park (44 percent), Ropes Park (38 percent), Emerald Beach (35 percent) and Poenisch Park (33 percent) and Laguna Shores (26 percent). McGee Beach, despite its one-star rating, exceeded standards 19 percent of the time last year, the study found.

A day before the environmental group released its report, the Texas General Land Office, which compiles the testing data, issued an upbeat news release touting the “safer, cleaner Texas beaches.”

“Fewer beach advisories were required in 2007 than in 2006,” the agency said. The reason for the discrepancy: the land office only counted the peak swimming months of May-September and the popular Spring Break period.

“It’s clear in there we’re talking about the summer months,” agency spokesman Jim Suydam said. “The idea is to capture the best data from when people are at the beach.”