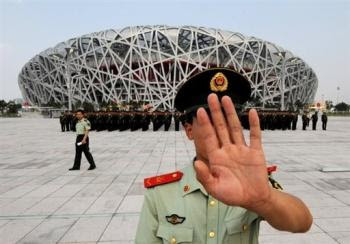 A Chinese paramilitary policeman tries to block photos being taken outside the Olympic Stadium. Photo by AFP.
Repression of ‘human rights defenders, journalists and lawyers has intensified’
July 29, 2008

HONG KONG – China is using the Beijing Olympics as a pretext to pursue — and in some cases tighten — a crackdown on human rights, notably ridding the capital of “undesirables,” Amnesty International charged Monday.

Reporting 11 days ahead of the August 8 opening ceremony, the rights group said that despite some minor reforms, authorities had stepped up repression of activists and lawyers to present a picture of stability and harmony.

Amnesty urged the International Olympic Committee and political leaders to do far more to challenge China, warning of even more repressive measures once the spotlight on the Games has faded away.

“Unless the authorities make a swift change of direction, the legacy of the Beijing Olympics will not be positive for human rights in China,” it warned.

“In fact, the crackdown on human rights defenders, journalists and lawyers has intensified because Beijing is hosting the Olympics.”

Amnesty’s report, citing specific cases, said activists who had tied their cause to the Games had been singled out for the pre-Olympics “clean-up,” while many others were being detained, imprisoned or placed under house arrest.

“Authorities have used the Olympic Games as a pretext to continue and in some respects, intensify existing policies and practices that have led to serious and widespread violations of human rights,” the report added.

It listed a series of recommendations urging China to:

* release all prisoners of conscience;

* impose a moratorium on the death penalty;

“It is very disturbing that Chinese authorities have indulged in such a big crackdown on the activists,” Mark Allison, China researcher for Amnesty, told AFP.

“These are people who represent many many more people in China.”

Officials were also extending the use of punitive administrative detention, notably of activists and petitioners as well as beggars and peddlers, Amnesty said.

In January, Beijing police launched a campaign against “illegal activities that tarnish the city’s image and affect the social order,” it noted.

In May, authorities adopted a “re-education through labour” law to control various types of “offending behaviour.”

In June, authorities in Shanghai sent notices to activists and petitioners ordering them to report to the police every week and barring them from leaving without permission or visiting Beijing until after the Games.

A clampdown on journalists has also intensified in recent months, Amnesty said, citing figures from the Foreign Correspondents Club of China showing as many as 230 cases of reporters being obstructed from interviews this year so far, compared to 180 cases in the whole of last year.

Internet controls have also been tightened up and many websites closed down for providing information deemed sensitive, the group noted.

“This flies in the face of official Chinese promises to ensure ‘complete media freedom’ for the Games,” said Allison.

Such tactics raised concerns that officials would seek to block broadcasts of anything deemed sensitive or inappropriate, despite public commitments by organisers not to cut coverage.

Amnesty said China’s crackdown in Tibet earlier this year, and restrictions on reporting there, highlighted the authorities’ ongoing censorship.

It urged the IOC and the international community to express concerns publicly and press China to fulfil its obligations on human rights and dissent.

“The danger now becomes that after the Olympic Games, these patterns of serious human rights violations may continue or intensify with even less attention paid by the international community than has been the case so far,” it said.