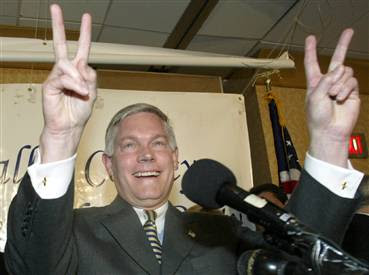 Pete Sessions has had a bad week. [Pete Sessions is the Republican U.S. Congressman from the 32nd District of Texas.] After attending a Las Vegas strip club earlier this week (and paying for it with campaign donations), citizen journalists across the country cried foul. As Americablog points out, “Sessions was publicly livid over Janet Jackson’s ‘liberal values’ when she bared her covered boobs during the SuperBowl a few years back”.

Apparently the outrage began and ended with the Janet, Justin peep show.

Sessions spent more than $5,000 at Kane’s club that night in March, according to federal disclosures. Those reports show Sessions spent another $2,100 on his hotel.

Outrage, decency, hypocrisy, and forty deuce aside, who attended the Sessions fun-draiser? According to D Magazine, the major donors for session weren’t Texans. They weren’t citizens groups. No, instead it was a series of professional poker players.

Now I’m sure all these Las Vegas residents are perfectly respectable citizens, and I for one am glad to see them engaged in the political process. But why did they choose a Dallas congressman as the vessel of their civic participation? Simple. Go to the congressman’s statement on proposed UIGEA regulations issued on April 2, 2008. Then note that this year’s Vegas cash started flowing on April 7, 2008. Seems like Nevada has bought itself an extra congressman.

This isn’t just a Democrat vs. Republican issue. In fact, the conservative Texas Eagle Forum told Gromer Jeffers of the Dallas Morning News, “What’s the difference?’ asked Cathie Adams, president of the Texas Eagle Forum. ‘I don’t think that it’s representative of the constituents of the district. I’m in shock.'”

The focus on Congressional District 32 is clearly spilling over into local elections.

Bill Keffer is running again for the State House Seat 107, won by Allen Vaught in 2006. Keffer has made shutting down local strip clubs one of the centerpiece issues of his 2008 campaign. In his local campaign mailings, he rails against local clubs calling them “immoral and exploitative operations” (June 10, 2008). Yet, he is happy to take Sessions’ strip club money.

“It is hypocritical for Bill Keffer, who claims to be the champion of morality, to continue accepting Pete Sessions’ political patronage and strip club money. He should denounce Congressman Sessions for using a strip club venue to raise money, and he should return the monies given to him by Sessions or that Sessions helped him raise for use in his own campaign,” said Ewing.

Pete Sessions has played a major role in Keffer’s fundraising and political efforts since his 2006 defeat. Keffer frequently touts Sessions’ endorsement and Sessions has been making phone calls, sending letters, and hosting fund raisers on behalf of Keffer since the middle of the 2007 legislative session.

This is another example of the Republican Party wanting to dictate to Texans and Americans how they should live their lives, but not heed their own advice. It is time for us to vote against hypocrisy and vote for leadership. Sessions needs to go and Bill Keffer should never return to elected office.

You can read more on the Sessions situation at TexasKaos , and Talking Points Memo. In addition, if you know of any other candidate who has received a donation from Pete Sessions, let us know in the comments.