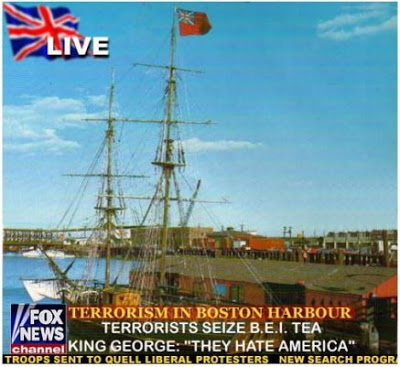 If Fox News Had Been Around. Graphic: Source.
Media verdict is in: Fox News driving force behind tea parties

Summary: Like local media across the country, major national news outlets noted that Fox News was a driving force behind the April 15 tea parties.

In their coverage of the April 15 tea-party protests, major national news outlets joined numerous local media in noting that Fox News was a driving force behind the tea parties. For example, on the April 15 edition of CNN Newsroom, media critic and Reliable Sources host Howard Kurtz said, “I don’t think I’ve ever seen a news network throw its weight behind a protest like we are seeing in the past few weeks with Fox and these tea parties.”

As Media Matters for America documented, despite describing their reports as “fair and balanced,” Fox News hosts aggressively promoted the protests and encouraged viewers across the country to get involved; hosts and guests, including those on Fox Business Network, engaged in inflammatory rhetoric during their coverage of the protests on April 15. From April 6 to April 15, the network aired 107 commercial promotions for its coverage of the tea-party protests, featured at least 20 segments about the protests, directed viewers to a “virtual tea party” on FoxNation.com, and repeatedly described the protests as “FNC Tax Day Tea Parties.” During the lead-up to the April 15 protests, tea-party organizers also used the planned attendance of several Fox News hosts to promote their protests.

Fox News’ promotion of the tea parties has not gone unnoticed, and the consensus that Fox News played a key role goes is shared by national and local media alike. Dozens of articles about tea parties in various cities reported that Fox News and its hosts helped influence, start, or turn out participants to local protests. In numerous cases, these reports quoted local participants or organizers stating they were motivated to join or start protests because of Fox News. As the Albany Times Union put it in an April 15 editorial, “This manufactured movement has been provided a sense of legitimacy and momentum by Fox News.” 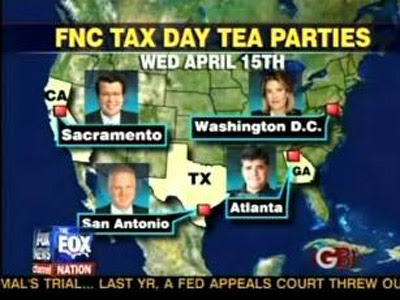 * On the April 15 edition of ABC’s World News, correspondent Dan Harris reported that the protests were “cheered on by Fox News and talk radio.”

* During live coverage of the tea party in Chicago, CNN correspondent Susan Roesgen said the “party for Obama bashers” was “highly promoted by the right-wing conservative network Fox.”

* On the April 15 edition of the CBS Evening News, correspondent Dean Reynolds cited Fox News hosts Glenn Beck and Neil Cavuto as “rightward-leaning … commentators” who “embraced the cause” of the tea parties.

* On the April 13 edition of MSNBC’s Countdown with Keith Olbermann, guest host David Shuster described the tea parties as a “movement that’s short on outrage and long on Republican manufacturing” and also said: “Then there is the media, specifically the Fox News Channel, including Glenn Beck and Sean Hannity. Both are looking forward to an up-close-and-personal taste of tea-bagging at events this Wednesday.” Shuster also noted that Cavuto had been “defending his network’s promotion” of the events. Later in the segment, MSNBC political analyst Lawrence O’Donnell said of Fox News’ involvement with the event: “What they’re trying to do is create gigantic television events for their shows on that day. They have to pretend that they are covering a news event rather than trying to create one, which they’ve very clearly done when you look at the history of — in the last month of the Fox News discussion of this, and how they’ve built it up.”

* On the April 9 edition of her MSNBC show, Rachel Maddow stated that “our colleagues at Fox News are not just reporting on” the tea party protests, “they are officially promoting” them. After airing a clip of Beck asserting that you can “celebrate with Fox News” at the tea parties its hosts will be attending, Maddow noted that “Fox News Channel has described the tax day events on-screen as ‘FNC Tax Day Tea Parties,’ and they are dispatching some of their hosts to take part in” the events.

* After airing a Fox News promotion of its upcoming “fair and balanced” coverage of the tea parties, Chris Matthews stated during the April 13 edition of MSNBC’s Hardball: “I have got to believe that [Fox News president] Roger Ailes has the biggest tongue in his cheek when he does these ads. ‘We report. You decide.’ I mean, what are you — balanced coverage of an anti-government rally, an anti-tax rally — balanced coverage of that, it’s so amazing.”

* On the April 15 edition of Hardball, guest host Mike Barnicle said: “The tea parties have been funded by conservative groups, hailed by the Republican National Committee and promoted by Fox News.”

* Reporting live from Boston on the April 15 edition of CNN Newsroom, correspondent Mary Snow said: “A number of different speakers here today throughout the day, and also a lot of the people who are here saying, you know, they had heard about this. FOX News radio hosts had been promoting this event, and they came out today.”

* During the April 13 edition of CNN’s The Situation Room, Kurtz asserted that Fox News “practically seems to be a co-sponsor” of the tea-party protests. Kurtz pointed out that Fox News contributors Newt Gingrich and Michelle Malkin are supporting the protests and noted that “Fox News, whose new online slogan is ‘Just say no to biased media,’ began publicizing the protests. And, soon, some hosts were signing on.” Kurtz later added that “[t]hese hosts said little or nothing about the huge deficits run up by President Bush, but Barack Obama’s budget and tax plans have driven them to tea,” and said that, while Beck and his fellow Fox News host Sean Hannity “and the gang” are “paid for their opinions,” “[t]he question is whether Rupert Murdoch’s network wants to be so closely identified with what has become an anti-Obama protest movement.”

* Washington Post business columnist Steven Pearlstein wrote in an April 17 column: “I almost choked on my scrambled egg whites yesterday morning when I read The Post’s story about the April 15 ‘tea party’ protests promoted by Fox News and other conservative organizations.”

* In his April 16 Washington Post column, Dana Milbank wrote that “Fox News, though actively promoting the ‘tea party’ protests for tax day, tried to argue that it was not behind yesterday’s coast-to-coast events.” Milbank continued:

But Fox News analyst Tobin Smith, who took the stage in Lafayette Square yesterday, evidently didn’t get the memo. “On behalf of Fox News Channel,” he told more than 500 mud-spattered demonstrators, “I want to say: Welcome to the Comedy Channel of America, Washington, D.C.”

After a few preliminaries, he went into a Fox News commercial for anchor Glenn Beck. “Anybody watching Glenn?” he asked to cheers. “That was a shameless plug, wasn’t it? Glenn says hello as well. He’s out at another tea party.” Indeed he was, as were Sean Hannity and Neil Cavuto.

A small group of counterdemonstrators, wearing ballgowns, tuxedoes and pig snouts, interrupted and were stripped of their signs. Smith seized the display as an opportunity to highlight the Fox News slogan. “You know what ‘Fair and Balanced’ means?” he asked. ” ‘Fair and Balanced’ means we take our message and try to overcompensate for their lack of message.” Smith left with instructions: “Keep watching Fox, will you?”

The theme was echoed in some of the homemade signs the demonstrators carried, including “Watch Fox News,” “Thank You Fox News,” and even a recommendation: “Move Glenn Beck to 7 PM.”

* An April 15 New York Times article reported that “[a]lthough organizers insisted they had created a nonpartisan grass-roots movement, others argued that these parties were more of the Astroturf variety: an occasion largely created by the clamor of cable news and fueled by the financial and political support of current and former Republican leaders.” It continued: “Fox News covered the events all day with reporters and hosts at the scenes. Neil Cavuto, a Fox host, and Michelle Malkin, a conservative contributor, headlined the protests in Sacramento while Sean Hannity broadcast his show from the protests in Atlanta.”

* In his April 12 New York Times column, Paul Krugman wrote that “it turns out that the tea parties don’t represent a spontaneous outpouring of public sentiment. They’re AstroTurf (fake grass roots) events, manufactured by the usual suspects. In particular, a key role is being played by FreedomWorks, an organization run by Richard Armey, the former House majority leader, and supported by the usual group of right-wing billionaires. And the parties are, of course, being promoted heavily by Fox News.”

* On April 15, in commentary in the Los Angeles Times, columnist James Rainey wrote that “Fox has been building up to the protests with Super Bowl-style intensity. Promos promise ‘powerful’ coverage of an event that will ‘sweep the nation.’ ” Rainey characterized Fox News as giving “relentless support” to the protests and added that “[t]he Fox promotions people have been pumping up the volume, with ads celebrating hundreds of rallies and citizens who are ‘demanding real economic solutions.’ ” He also noted: “You’d expect conservative commentators like Glenn Beck and Sean Hannity to be hyping today’s wave of anti-tax ‘tea parties.’ But Fox personalities labeled ‘news’ anchors are right there with their blessings too.”

* In an April 16 Los Angeles Times article, reporters Michael Finnegan and Janet Hook wrote that “protesters gathered in cities across America to mark the April 15 tax filing deadline with rallies inspired by the Boston Tea Party and promoted by Fox News, conservative blogs and talk radio.”

* An April 16 San Francisco Chronicle article stated, “Conservative Fox News commentators like Sean Hannity talked up the rallies for weeks and hosted their programs from them Wednesday.”

* An April 16 Associated Press article reported: “In Atlanta, thousands of people were expected to gather on the steps of the Georgia Capitol, where Fox News Channel conservative pundit Sean Hannity was set to broadcast his show Wednesday night. He’s been promoting the show on Fox.” The article also reported that one protester attended a Louisville, Kentucky, tea party “after reading about it online and hearing about it on Fox News.”

* In addition to referencing Hannity’s broadcast from the Georgia Capitol, a separate April 16 AP article also stated that “[o]rganizers said the movement developed organically … through exposure on Fox News.”

From the April 15 broadcast of NPR’s All Things Considered:

SMITH: Organizers say that by the end of the evening, the number of protests will number more than 300, all conceived and put together, they say, by grassroots activists — not that there wasn’t a little partisan fertilizer. Conservative groups like FreedomWorks lent their organizing muscle on the Internet. FreedomWorks was founded by former Republican Congressman Dick Armey. Conservative bloggers and talk show hosts jumped on board. Fox News began publicizing the events early and often. Fox hosts are broadcasting live today from various tea parties.

This entry was posted in RagBlog and tagged Broadcast Media, Fox News, Journalism. Bookmark the permalink.

3 Responses to The 2009 Tea Parties: Fox News Is Responsible