The Audacity of Obama : Centrist Appointments a Smoke Screen 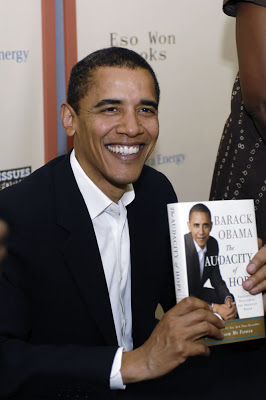 Barack Obama at a book signing in 2006. “The writing style of Audacity of Hope reveals how complex and perceptive Obama is.”

These various initiatives, which will collectively set the nation on a path towards energy independence, ending the war and redistributing financial resources downward, are presented as unconnected pieces of legislation but actually they are interlocking components of Obama’s coherent multi-layered agenda.

Also see Obama Chooses an Unlikely Team of Hawks by Peter Beinart, Below.

I agree with Mark Rudd’s perceptive article Let’s Get Smart About Obama in The Rag Blog.

The writing style of Audacity of Hope reveals how complex and perceptive Obama is: he is hyper-literate, almost Ciceronian, and unlike most of his speeches, amazingly precise. He expresses what he thinks and feels without resorting to binary thinking. He does not interpret reality in black and white terms: he is the nation’s first post-modern president.

All of this leads me to the same conclusion reached by Mark Rudd: this guy is really SMART. He is setting Hillary Clinton up to be the public face of his effort to end the Iraq war. He is going to sucessfully extort green concessions from Detroit. He will convince Congress to pass a major stimulus package that will lay the foundation for the development of an alternative energy manufacturing industry. He will do something to help reduce housing foreclosures. He will let the Bush tax cuts for the wealthy expire.

These various initiatives, which will collectively set the nation on a path towards energy independence, ending the war and redistributing financial resources downward, are presented as unconnected pieces of legislation but actually they are interlocking components of Obama’s coherent multi-layered agenda. His centrist appointments are a smokescreen; they co-opt the moderate center, but he’s still the commander in chief. Even Lenin would be impressed!

In liberal blogland, reports that Barack Obama will probably choose Hillary Clinton as Secretary of State and retired general James Jones as National Security Adviser and retain Robert Gates as Secretary of Defense have prompted a chorus of groans. “I feel incredibly frustrated,” wrote Chris Bowers on OpenLeft.com.

“Progressives are being entirely left out.”

A word of advice: cheer up. It’s precisely because Obama intends to pursue a genuinely progressive foreign policy that he’s surrounding himself with people who can guard his right flank at home. When George W. Bush wanted to sell the Iraq war, he trotted out Colin Powell–because Powell was nobody’s idea of a hawk. Now Obama may be preparing to do the reverse. To give himself cover for a withdrawal from Iraq and a diplomatic push with Iran, he’s surrounding himself with people like Gates, Clinton and Jones, who can’t be lampooned as doves.

To grasp the logic of this strategy, start with the fact that Obama’s likely national-security picks don’t actually disagree very much with the foreign policy he laid out during the campaign. Jones is on record calling the Iraq war a “debacle” and urging that the detention center at Guantánamo Bay be closed “tomorrow.” Gates has also reportedly pushed for closing Gitmo and for faster withdrawals from Iraq.

He has called a military strike against Iran a “strategic calamity,” urged diplomacy with Tehran’s mullahs and denounced the “creeping militarization” of U.S. foreign policy. (You don’t hear that from a Defense Secretary every day.) For her part, Hillary Clinton during the presidential campaign embraced an Iraq-withdrawal position virtually identical to Obama’s. And although they fought a sound-bite war over sitting down with the leaders of countries like Iran, the two candidates’ actual Iran policies were pretty much the same. Both wanted intensive diplomacy; both wanted to start it at lower levels and work up from there.

On key policy issues, Jones, Gates and Clinton aren’t significantly more hawkish than Obama. What they are is more hawkish symbolically. Gates is a Republican; Jones is a Marine general who once worked for John McCain; Clinton, as Senator from New York, has gained credibility with hawkish pro-Israel groups. In other words, what distinguishes Gates, Jones and Clinton isn’t their desire to shift Obama’s policies to the right; it’s their ability to persuade the right to give Obama’s policies a chance.

Obama knows that although Iraq has tarnished the GOP foreign policy brand, Democrats remain vulnerable. When the moderate Democratic group Third Way asked voters in September whom they trusted more on national security, Democrats trailed by 14 points. (The gap has widened substantially since late 2006.) On the question of “ensuring a strong military,” they trailed by 30 points–an astonishing figure, given that it is a Republican President who has stretched the Army to its breaking point.

Politically, therefore, Obama is playing with fire. If he accelerates troop withdrawals and violence in Iraq flares up again, the GOP will pounce. If he cuts a nuclear deal with Iran, it will probably do the same, accusing him of putting his faith in an inspection agreement that Tehran will never obey. And if he pushes hard for a peace deal between Israel and the Palestinians, right-leaning Jewish groups may cry foul. That’s the beauty of his emerging national-security team. Even Republicans will find it hard to call Gates and Jones latter-day Neville Chamberlains, and even many Likudniks will think twice before claiming that Hillary Clinton is in league with Hamas. (For cover on Israel, Obama will also be able to trot out Rahm Emanuel, whose father was born in Jerusalem, and, quite possibly, long-serving Middle East envoy Dennis Ross, who is tight with the pro-Israel lobby.)

Obama understands that foreign policy is, in international-relations-speak, a two-sided game. To get your way, you not only have to convince other governments; you also have to convince the folks back home. Bill Clinton negotiated the Kyoto Protocol on global warming with well over 100 other countries but couldn’t get it through the 100-member U.S. Senate. He crafted a nuclear agreement with North Korea but saw it sabotaged by a Republican Congress that wouldn’t provide sufficient money to carry it out. Obama knows that while it’s a tough world out there, it’s tough here as well. In Gates, Jones and Clinton, he’s found people who can do more than sell his foreign policy to Iranians, Iraqis and Israelis; they can sell it to Americans too.

[Beinart is a senior fellow at the Council on Foreign Relations.]

3 Responses to The Audacity of Obama : Centrist Appointments a Smoke Screen