Palestine: On the Eve of Destruction 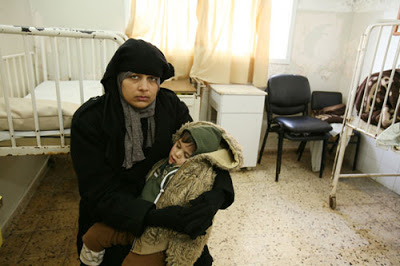 Mahmoud, 4, is held by his mother at Al Nasser Hospital in the Rimal area of Gaza City. The room is cold due to the fuel blockade. Mahmoud is receiving oxygen at the hospital for an immune disorder, but his health is deteriorating, as the sanctions have prevented his getting essential medicines and milk. Photo: UNICEF.
Is Anyone Listening? Gaza’s Death Throes
By Sonja Karkar / November 28, 2008

What kind of government in the 21st century can deny another people basic human rights – that is, the right to food, water, shelter, security and dignity?

What kind of government imposes draconian sanctions on another people for democratically electing a government not to its liking?

What kind of government seals a heavily populated territory of 1.5 million people so that no person can enter or leave without permission, fishermen cannot fish in their own waters, and world food aid cannot be delivered to the starving population?

What kind of government shuts off fuel, water and electricity and then rains down on the people, bombs and artillery fire?

The answer is – no government of integrity.

And yet, government after government in Israel continues to demand recognition and accolades as a first world democracy superior to all others, despite Israel’s flouting of international law, its human rights abuses and the criminality and corruption of Israeli leaders. Worse still, the world has acquiesced and has welcomed every Israeli administration into its fold as a favoured guest.

This should give everyone pause to revisit our noble declarations of independence and human rights, ethics, morality, religious beliefs, civil liberties and the rule of law. Are they just for show or do they really mean something? Are they intended only for some people or for all people?

Israel’s President Shimon Peres is just one of the many leaders who have furthered Israel’s aggressive policies and programs and yet he has been honoured with a knighthood from the Queen and is likely to be honoured with a lecture series named after him at Oxford University’s Balliol College. Dubious honours indeed, for a man who helped to forcibly expel 750,000 Palestinians from their homeland in the 1948 war.

Today, we are witnessing in Gaza the kind of ghetto the world thought it would never see again and the comparison was conjured up early this year by Israel’s deputy defence minister Matan Vilnai when he threatened “a bigger holocaust (shoah)” against the Palestinians in Gaza. Later, he explained away his use of the word as meaning “disaster”, when in fact it has emotional connotations well known to everyone. Either way, the threat was ominous enough.

The slow death that is being visited on the Palestinians in Gaza is finding its first victims in more than 400 critically ill patients who are being prevented from leaving Gaza for urgent medical attention in Israeli or Arab hospitals. Thousands of other patients are being turned away from hospitals suffering from a severe shortage of 300 different kinds of medicines.

The hospitals have been deprived of medicines and equipment for so long now, that the trickle of supplies finally being allowed through, can no longer meet the minimum daily needs of the Palestinian civilian population. Similarly, the energy fuel being shipped in, is barely enough to operate the Gaza power plant for one day.

This drip-feeding of aid was suggested by Israeli Prime Ministerial adviser Dov Weisglas who said in February 2006: “The idea is to put the Palestinians on a diet, but not make them die of hunger.”

Such a malevolent policy has led to a steady increase in malnutrition as people are being starved of their staples of life. Not only have the flourmills been forced to shut down because fuel and power have run out, but now all wheat supplies have been exhausted. Out of the 72 bakeries operating in the Gaza Strip, 29 have completely stopped baking bread and others are expected to follow. This means that even the most staple of all foods – bread – will soon not be available for a hungry population.

A Red Cross report describes the effects of the siege as “devastating”. Seventy per cent of the population is suffering from food insecurity while the suspension of food aid distribution to some 750,000 refugees in the pitiful camps in Gaza since 4 November, has further devastated Palestinians with no recourse to other alternatives.

The United Nations, Amnesty International and Human Rights Watch have all called Israel’s blockade ”cruel”. Former president Jimmy Carter makes no apology for describing the situation as “a heinous atrocity” amounting to a war crime.

In Britain, Oxfam’s CEO Barbara Stocking has strongly criticised the Foreign Secretary David Miliband for not mentioning the “human desperation” in Gaza on his recent trip to Israel and Palestine.

Israel’s tactics though may be unravelling.

So draconian has been Israel’s closure of Gaza, the world’s biggest media organisations including the New York Times are outraged that their journalists have been banned from entering the Gaza Strip and have protested in writing to Israel’s Prime Minister Ehud Olmert.

Christian leaders have also been excluded from Gaza. Last week, Israel prevented Archbishop Franco, the Papal Nuncio in Israel, from celebrating mass to mark the beginning of Advent in the holy weeks leading up to Christmas.

And in the occupied West Bank, Israeli Minister Ehud Barak has approved the building of hundreds more illegal settlement units with a flagrant disregard of the peace process agreements, further frustrating the current US administration eager to produce a solution before the end of its term.

What is truly astonishing is the world’s silence in the face of all this. The shameful rush to grant Israel every honour and recognition so that it will be saved from the historical ignominy of having orchestrated the destruction of Palestinian society, is nothing short of unconscionable.

[Sonja Karkar is the founder and president of Women for Palestine and one of the founders and co-convener of Australians for Palestine in Melbourne, Australia. She is also the editor of www.australiansforpalestine.com and contributes articles on Palestine regularly to various publications. She can be contacted at Source / CounterPunch