The Brewing Storm in Northern Iraq 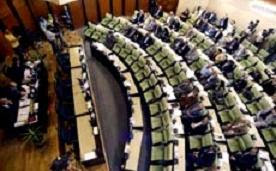 Vetoing the law came after protests by Kurdish and some Shiite MPs, who boycotted the vote over a secret ballot on Kirkuk’s provincial council seats. (Reuters photo)
Election Law Polarizes Kirkuk
By Afif Sarhan / July 24, 2008

KIRKUK — The controversial provincial election legislation is leaving the northern oil-rich city of Kirkuk polarized between Arabs who believe it would restore justice and Kurds who see it a threat to their influence.

“We had only one day of hope and happiness when the new election law was approved,” Firas Bakar, an Arab resident of Kirkuk, told IslamOnline.net.

“Kurds, again, took away the dream.”

The law would have given equal distribution of seats among Kurds, Turkmen and Arabs in the disputed city, which means Kurds would lose their current control over Kirkuk’s provincial council seats.

The Presidential Council, headed by President Jalal Talabani, has rejected the law, passed by the parliament to pave the way for provincial elections later this year.

“The president does not accept a law like this,” read a statement issued by the office of Talabani, himself a Kurd.

“We were beginning to trust the government with the approval of the law but Kurds could not let it happen,” fumed Bakar, a 43-year-old teacher.

“The decision taken by the parliament was about to achieve justice,” insists Fadhel Mustafa, an Arab MP.

“Giving power to just one group is unfair and without logic.”

He warns that the city has been on shaky grounds for years.

“Kurdish politicians have been encouraging Kurds to settle in Kirkuk and change the normal structure of the city.”

Thousands of Kurds were reportedly forced out in the 1970s by the Saddam Hussein regime.

Over the past five years, the city has seen thousands of Kurds returning and other thousands of Arabs forced out from their homes.

Sunni Arabs, who make up nearly 30 percent of Kirkuk population, accuse the local government of siding with the returning Kurds.

For Kurds, rejecting the provincial election legislation and having total control over Kirkuk’s council is fair.

“We have the right to control Kirkuk and make it our own,” Heyas Rebiwar, a resident of Sulaimaniyah, told IOL.

“We don’t want division of power.”

Kurds believe the oil-rich city is rightfully theirs.

“It is clear that this land is part of Kurdistan and we are the majority,” insists Rebiwar.

“We should have control over Kirkuk. If it doesn’t happen, we will fight for out rights, whatever the consequences are.”

Tensions are already running high in the city.

“We have raised security over Kirkuk’s streets because we believe this recent announcement would drop more fuel over the fire,” a local police officer told IOL requesting anonymity for the sensitivity of the issue.

According to the police, five cases of sectarian violence were registered in only one day, and all of them resulted from heated political discussions over the law.

Iraqi officials say vetoing the provincial election legislation over the Kirkuk dispute has left the entire political process in tatters.

“We expected that any decision that would involve Kirkuk’s control would create uncontrolled disputes,” a member from the electoral commission told IOL on condition of anonymity.

The commission had already said that provincial elections, scheduled for October 1, needed to be delayed until December 22.

The commission official believes that the delay would most likely be further extended now.

The presidential veto means the bill would be sent back to parliament to be redrafted.

“The situation is getting critical,” said the official.

“We hope a soon solution can be achieved so we can have a fair and democratic election.”

A delay of the elections would be a blow to the Bush administration, which considers them a key step toward national reconciliation.

The provincial elections are aimed at redistributing power in Iraq’s 18 provinces.

Most Sunni Arabs boycotted provincial balloting in 2005, enabling Shiites and Kurds to win a disproportionate share of power.

This entry was posted in RagBlog and tagged Electoral politics, Iraq, Middle East. Bookmark the permalink.