The Clinton-Colombia Connection : It Goes Back a Long Way 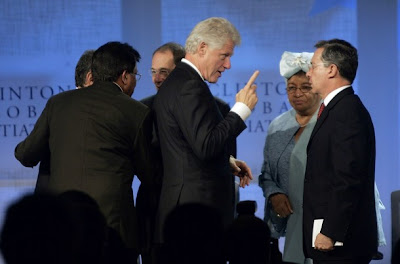 A week ago, if you’d asked most people to say the first thing that popped into their heads when they heard the word “Colombia,” you might have gotten: “Bogotá,” “coffee,” “cocaine,” or maybe even “kidnappings.”

Today that list would probably be led by “Clinton.”

First came chief strategist Mark Penn’s “reassignment” following the embarrassing revelation of his side job advising the Colombian government on how to promote a trade agreement loudly decried by the candidate whose campaign has so far paid him and his firm $10,800,000 for his input.

Then came word that Clinton campaign spokesman Howard Wolfson also has financial ties to Colombia via his involvement the Glover Park Group, a company founded by Clinton administration alum Joe Lockhart that has also been advising the Colombian government.

And, of course, there is the Whitman sampler of Colombian goodies gobbled up by Bill Clinton, including: $800,000 in speaking fees from a Colombian pro-free trade agreement group; a “Colombia is Passion” award bestowed by Colombia’s president Alvaro Uribe (who honored the former president as an “unofficial minister of tourism”); and a sweet Colombian oil field deal for a company Clinton pal Frank Giustra’s investment firm had advised. Giustra is the mining magnate who has donated $31 million to Clinton’s charitable fund, and whom Bill personally introduced to Colombian President Uribe (Giustra is the same guy Clinton helped land a uranium deal in Kazakhstan, but that’s a Clinton story for a different blog post).

The Clinton-Colombia connection doesn’t stop there — and involves much, much more than a spousal disagreement over how free our trade with the Colombians should be.

As President, Bill Clinton had initiated Plan Colombia, a $1.3 billion aid package to escalate the war on drugs in Colombia. I wrote a number of columns in 2000 and 2001 outlining the very troubling nature of this Clinton-backed initiative. I’ll include the links at end of this post if you want a fuller history, but here is a quick refresher:

At the time, Colombia was in the midst of a four-decades long three-way civil war pitting the Colombian army, which has one of the worst human-rights records in the Western hemisphere, against leftist rebels and right-wing paramilitary groups, both largely funded by the drug trade (a war that continues to this day). Despite the abject failure of America’s misguided war on drugs — with the hundreds of billions spent on it failing to curtail drug use — Clinton decided that another billion or so directed to Colombia would do the trick. The Colombian military’s extensive ties to right wing death squads be damned! In fact, Clinton signed a waiver of human-rights provisions that Congress had imposed on the Colombia drug-war package.

The story of how Clinton helped funnel all that money to Colombia is a textbook case of much that is wrong with the way our political system operates.

For instance, to avoid resistance from those who did not believe this was the best way to spend over a billion in taxpayer dollars, the Clinton administration decided to introduce the Colombian aid as part of a larger emergency-spending package — bundling the potentially controversial measure with proposals to provide $2.2 billion for relief from natural disasters, and $854 million for military health care. It’s an old legislative ploy designed to squelch debate and force politicians to vote for wasteful — or even terrible — measures just because they don’t want to be painted as being against God, country, and disaster relief.

The Clinton White House also used a poll commissioned by a very interested party to help provide cover for the Colombian initiative. Here’s how it worked: defense contractor Lockheed Martin commissioned Democratic pollster Mark Mellman to conduct a poll which concluded that 56 percent of registered voters would support $2 billion being spent on “tracking planes to be flown in drug-producing areas.” (I’m surprised the poll didn’t also conclude that 82 percent of those 56 percent would be especially overjoyed if those planes were “Lockheed Martin P-3 tracking planes.”) Lockheed’s smart bomb hit its mark: five months after this manufactured mandate was presented to the president, he proposed the $1.3 billion package, confident that he could shake “the will of the people” (or at least the 800 people Mellman offered his tailor-made questions to) in the face of opponents.

And, it wasn’t just the White House playing the Beltway game. When there is that much money involved, you know that lobbyists will be right in the center of the action. In the case of Plan Colombia’s river of cash, among those involved were Clinton confident Vernon Jordan, whose law firm was hired by the Colombian government to stump for it on the Hill. And lobbyists for Occidental Petroleum, BP Amoco, and (flashback alert!) Enron, all of which had business interests in Colombia, were also greasing the wheels for the aid bonanza – as were lobbyists for a pair of helicopter manufacturers looking to get a cut of the substantial slice of the money earmarked for the purchase of drug-war fighting choppers.

This is how our government worked then – and how it continues to work today, with Washington insiders moving back and forth between lobbying firms, campaign staffs, and government positions, and former presidents raking in big bucks making speeches while acting as facilitators to sweetheart private deals and advocating for public ones.

And this is how our government will work in the future as long as we elect candidates whose campaigns are run by the likes of Mark Penn and Howard Wolfson — and advised by the likes of Bill Clinton. And that holds for the likes of Charlie Black, Rick Davis, and the bevy of other lobbyists guiding John McCain’s campaign as well.

Follow the stink rising off the Clinton/Colombia connection and you’ll arrive at the very large slagheap that American politics has become.