And It All Comes Tumbling Down

1. Prices, Production and Exports
It was another week of volatility for oil prices as a potpourri of fundamentals, financial crisis, hearings, unemployment and a looming recession drove oil prices one way and then another. After losing $4 a barrel on Monday as speculators closed positions, prices recovered on Wednesday after the EIA reported that US gasoline stockpiles had fallen by 4.5 million barrels the previous week, twice what analysts had expected. On Friday, prices rose again to close out the week at $106 a barrel after the report that US jobs had declined for the third straight month, confirming fears that the US was headed for a recession. This time oil prices rose on bad economic news in expectation that there will be more interest rate cuts, a weaker dollar, and a flight to safe assets such as oil.

US gasoline prices rose to a record $3.30 on Friday and most analysts believe they will continue rising. The EIA is holding that average gasoline prices will peak at $3.50 later this spring, but many are predicting a spike to the vacinity of $4 a gallon.

In the wake of the inconclusive attack on Basra, Shiite cleric al-Sadr is calling for a million-man demonstration against the US “occupation” on Wednesday, the 5th anniversary of the fall of Baghdad. Some fear the demonstration could set off events destabilizing the government. In the meantime Iraq is still exporting oil from Basra at slightly below pre-attack levels.

OPEC reports March shipments were down about 85,000 b/d from February due to extensive maintenance and other problems in Nigeria that cut exports there to the lowest in five years. Of more interest was the report that Russia failed to increase its oil production for the third month in a row and the first quarter production was down by one percent from a year earlier. Moscow, however, is still predicting that production will grow by 1.7 percent this year, well below the 11 percent increase in 2003. Russin pipeline exports to Europe recovered to 4.23 million b/d in March, but many believe the surge was in anticipation of forrthcoming export taxs and that Moscow’s exports will soon drop.

2. Electricity Shortages and Diesel
Stories of current and imminent shortages of electric power are becoming more frequent each day. A combination of inadequate rain for hydro power, unaffordable oil and coal for thermal power, and rapidly increasing demand is leaving country after country with inadequate power for national grids.

It is becoming apparent that one of the unforeseen consequences of globalization is that there is simply not enough power being produced in the world to run the flood of inexpensive electric consumer goods – TVs, kitchen appliances, air conditioners — that are pouring from the factories of Asia onto the world.

While electric companies may eventually be able to make special arrangements to exempt organizations that are vital to the economy from blackouts, there are massive numbers of organizations around the world that are completely dependent on electricity to keep functioning. For these, the choice is generate their own electricity with their own generators or shut down.

What is developing is a new and potentially very large demand for gasoline and particularly diesel fuel as the national power grids fall further and further behind in their ability to keep up with demand for electricity. Higher prices and shortages are clearly in store as more and more Chinese-made small and medium sized electric generators come into service around the world.

3. Rice, Inflation and Oil
Rice prices increased by 50 percent in the last two weeks to an all-time high as importing countries scrambled to hold off social unrest by securing supplies from the few exporters still willing to sell. As the staple food for 3 billion people, 33 countries are facing unrest as the price of food and energy becomes unaffordable.

There are multiple reasons behind the sudden price increase ranging from weather-related poor harvests, hoarding, and world-wide inflationary pressures resulting from high energy costs to the financial crisis. Major rice exporters such as India, China, and Vietnam have already curtailed or stopped exports to hold down domestic prices. 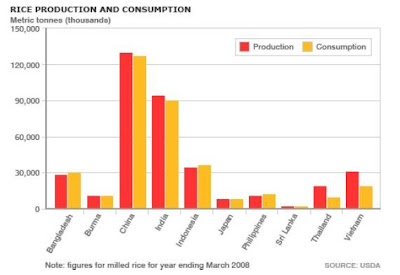 Among the hardest hit countries so far have been Bangladesh, the Philippines, and Pakistan where millions now face seriously restricted diets.

Even rich oil states are facing problems. Nigeria is one of the world’s largest importers of rice and Kuwait is now shut off from the Indian rice that is the staple food for most of the 1.3 million foreigners working in the country. Even the Saudis have removed the import duties on imported food. In Pakistan 80 million people are estimated to be at risk of not receiving sufficient food.

This situation is too complex to foresee future developments. If it gets worse, widespread food riots could topple governments. If millions are faced with starvation, pressure to stop production of biofuels will increase. Leverage of food exporting nations in world affairs will increase.

Read all of it here. Energy Bulletin / The Rag Blog

Whipple is a retired CIA analyst and without peer in documenting these things and connecting the dots.

Peak energy is an important factor limiting food production. (Food, in the USA especially, is equivalent to peak petroleum).

And peak food is the “final solution” to limiting world population in an expansionist global economy.

An economy in which every additional birth is regarded as a human addition to global profit potential.

In other words, the inherent dynamics of an inherently expansionist global capitalism is pressing the world toward population overshoot and mass starvation (as well as global warming and the extinction of countless species).

Its time we understand that; its probably already too late to avoid an incomprehensible scale of global misery.

This entry was posted in RagBlog and tagged Economy, Energy, Poverty, The World. Bookmark the permalink.