The Disembodied Lightness Is Sheer Illusion

Well, this just sucks, especially since I’m an IT manager for a small manufacturing company. Welcome to the real world. 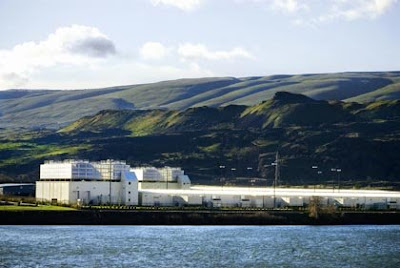 Google Data Center along the Columbia River in Oregon.
It is no coincidence that search engine giant Google is building its newest computer center near the Dalles Dam, a huge hydroelectric power plant in Oregon. Buying electricity directly from the plant costs one-fifth as much as Google would be paying in California. Besides, the Columbia River supplies inexpensive water to operate the eight multistory cooling towers designed to handle the waste heat from tens of thousands of computers.

Users are accustomed to the results of their searches appearing on their computer screens almost magically. Calculations have now been performed to determine the share of power consumption that can be attributed to a single Google search. Depending on the initial data, one Google search consumes enough electricity to run an 11-watt, energy-saving lightbulb for 15 minutes to an hour.

As long as Google refuses to release numbers, such calculations will remain only a guessing game. But one thing is certain: In 2006, according to a study commissioned by the German Environment Ministry, Germany’s roughly 50,000 computer centers consumed as much electricity as a nuclear power plant can produce in the same amount of time.

This thirst for energy also affects the climate. Economists with the US-based information technology research firm Gartner estimate that computer technology (including telephones, mobile wireless networks and printers) is now responsible for 2 percent of all carbon dioxide emissions — or, in other words, just as much as all air traffic does.

These numbers reveal that the sheer, disembodied lightness of the data world is nothing but a pretty illusion. In fact, it is a world built on real world data processing factories that, when it comes to power consumption, are reminiscent of the early days of industrialization. Computing with electrons is just as physical as the melting of steel or rolling of sheet metal. In both cases, no one cared much about resource consumption during the early phases.

This entry was posted in RagBlog and tagged Environment, Technology. Bookmark the permalink.