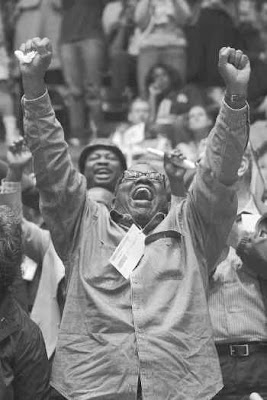 Several Rag bloggers and members of MDS/Austin attended the Travis County Democratic conventions in Austin on March 29, 2008. Most were delegates for Democratic presidential candidate Barack Obama.

Between 8 and 10 a.m., traffic was backed up for many blocks in every direction trying to get into the parking lots. Lines getting credentials were almost equally imposing. It took an hour and a half once we hit gridlock to get inside the building.

My duties as an Obama delegate took about half an hour out of eight hours inside the Exposition Center. The biggest delay was the credentials committee trying to get its act together. Many speeches by Democratic Party politicians all saying the same thing – we’re having this little family feud right now, but in November, we have to be together regardless.

The most interesting person saying this was ex-Democratic Party chair, Terry McAuliffe, now a major staff person for Hillary Clinton. He clearly said he would be working for Barack Obama in November if Obama was the nominee. Since he’s a hack for the corporate wing of the party, hopefully Obama won’t take him up on that.

Obama carried Austin by a wide margin and won enough delegates in the conventions statewide to surpass the margin Clinton earned by winning the primary. The final total for Texas will be 99 delegates to the national convention for Obama and 94 for Clinton.

I’m just back — literally, JUST back — from Texas’ 23rd Senatorial District’s Democratic convention. I left my house at 6:15 a.m. I walked in at 12:30 this morning.

I’m exhausted. I’m thrilled Obama won by such a wide margin. I’m honored to have been selected to attend our state convention. I’m pissed as hell at HRC’s national campaign.

And, after countless hours of phonebanking and organizing for Obama, an hourlong early voting process, a four-hour caucus process, and 18 hours of county convention, I’ve decided that I’m no longer willing to put up with anti-Texas jabs from Kossites, slurs against my patriotism from Republicans, and just about anything else from Clinton supporters.

Unlike Kath, I was largely unable to take photos because my credentials were challenged. Along with the credentials of a large swath of the elected delegates.

After six or so extremely hot, crowded, confusing hours, many of us were unable to determine why, exactly, our credentials had been challenged. The Clinton camp had announced that they were targeting the 23rd district for credentials challenges and, by god, that’s what they did.

By the end, the Clinton folks were willing — hell, eager — to throw out not just random individuals but the entire delegation of 2 precincts. (So much for voter enfranchisement, eh, Hills?)

The protest process was tailor-made for alienating committed voters, wearing them out to the point where they would drop out. By the end of the night, the convention floor was abuzz with tired, pissed-off voters who now hate Hillary with the fire of a thousand suns.

I’m one of them. Thanks for sucking those 10 or so hours away from me, Hills. Love ya. Mean it.

In the end, the Hillary camp did successfully win challenges on 22 delegates. Out of a total of 2,650. When the announcement came, we calculated that the 10-hour delay of the start of our convention averaged roughly a successful challenge only every 30 minutes.

So we stayed. Surprise, Hillary! Not a single delegate OR ALTERNATE left early from my precinct, which meant that the delegation not continuing on to state spent 12 hours making the Texas delegate count official.

So, take that, HRC! Your sniper fire was unsuccessful.

Dad, I’m putting you on notice. You choose to question my patriotism again because I oppose Iraq, you’ll rue the day.

And the next time we’re Bush-bashing around here, remember our 18 hours of non-stop conventioneering — and think twice about messing with Texas.

UPDATE: I just woke up. Beer and sleep GOOD! First, thank you all for your wonderful comments and expressions of support. I’ve tried to read them all, and respond where I could. I accept them all on behalf of all our Texas delegates, whom, as you can read in the comments, spent Saturday in one of the concentric circles of hell.

I won’t bother to rehash all the news reports that have come in with results. I will throw up this quote from the Dallas Morning News Trailblazers blog:

Barack Obama handily won District 16 by 59 percent-41 percent. But he crushed Hillary Rodham Clinton in Sen. Royce West’s District 23 — 82 percent to 18 percent. Clinton barely made the “threshold” of 15 percent to get any delegates at all from the county.

I’m off for coffee in a few minutes, and I’m going to start figuring out my response to the HRC campaign’s challenges.

Many of you asked the nature of the challenges, and all I can tell you is that the vast majority of us never figured out the exact grounds on which we were charged — and the conditions were so crowded, hot and crazy that it wasn’t practical to push any further than to get your credentials and get seated. (It was, in fact, so miserable that a few people passed out and EMS was called twice.)

My current plan of attack is to bombard our Texas superdelegates with our collective dissatisfaction with the 12 hours of bullshit. I’ll post a diary soon with a call to action to that effect, but I’ll need to do some research to pull together a list of our supers and their contact info.

Once again, I thank you all very, very much!

The conventions Saturday were electing about 7,300 delegates to the state Democratic Convention, June 5-7 in Austin. Those delegates will make the final decision on how the 67 caucus delegates are divided.

Typically, only a few hundred people turn out for the local conventions, but this year party officials had to find larger venues because tens of thousands of delegates attended.

Traffic jams leading to the Travis County Exposition Center for the Senate District 14 and Senate District 25 conventions caused numerous delegates to abandon their vehicles more than a mile away and walk to the convention.

The Senate District 11 convention in Pasadena had more than 1,200 people show up at the International Brotherhood of Electrical Workers Hall. The parking lot overflowed into a nearby elementary school, and cars lined the streets for blocks.

At the Senate District 6 convention, an area of heavy Clinton support, there were more than 40 precincts who had no delegates show up for the convention.

Clinton received about 64 percent of the popular vote in the Senate District 6 in the March 4 primary, but only 55 percent of the delegates attending Saturday’s convention backed her.

That gave Obama an opportunity to make up for losing ground in Webb County, where Clinton received all 51 delegates to the state convention because Obama’s delegates did not reach a 15 percent threshold attendance for claiming delegates. He had received 20 percent of the vote in the primary there.

One of the wildest conventions was Senate District 19 held at a San Antonio warehouse. When there was a fight over the list and credentials of registered delegates, the warehouse owner threatened to expel the convention.

At the Senate District 13 convention at Texas Southern University in Houston, an Obama stronghold, Clinton supporters unsuccessfully tried to gain delegate strength by asking Obama backers to switch so they would be elected as delegates to the state convention. Obama came out of the convention with 272 state delegates to Clinton’s 69.

When U.S. Rep. Sheila Jackson Lee, D-Houston, a superdelegate pledged to Clinton, spoke to the Senate District 13 convention, some Obama supporters booed her.

Despite the hassles Saturday, many Democrats said the turnout excited them about their prospects of breaking the Republican political hold on Texas.

“I wish we could bottle this enthusiasm and carry it over to November, which I think we will do,” said Rodney Griffin, temporary chairman of the Senate District 13
convention in Missouri City.

This entry was posted in RagBlog and tagged Politics, Presidential Campaign, Texas. Bookmark the permalink.