Remain Silent to the Crime and You Are Complicit 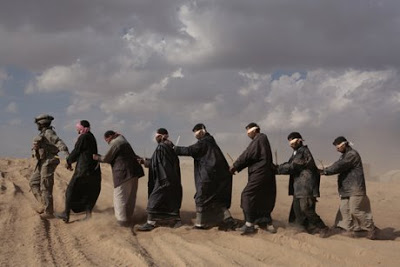 Amid all the talk about the U.S. military “surge” in Iraq, little has been said about the accompanying “surge” of Iraqi prisoners, whose numbers rose to nearly 51,000 at the end of 2007. Four years after the Abu Ghraib scandal, occupation forces are holding far more Iraqis than ever before and thousands more languish in horrendous Iraqi-run prisons.

Detainees are held by the U.S. command in two main locations — Camp Bucca, a 100-acre prison camp and Camp Cropper, inside a massive U.S. base near the Baghdad airport. The number of Iraqis held in these facilities has steadily risen since the early days of the occupation. In 2007, the inmate count rose 70% — from 14,500 to 24,700.

Camp Bucca, with about 20,000 inmates, is perhaps the world’s largest extrajudicial internment camp. The facility is organized into “compounds” of 800 detainees each, surrounded by fences and watch towers. Most detainees live in large communal tents, subject to collapse in the area’s frequent sandstorms. Water has at times been in short supply, while temperatures in the desert conditions can be scorching hot in the day and bone-chilling at night.

In October 2007, the U.S. Army Corps of Engineers awarded a contract to expand Camp Bucca’s capacity from 20,000 to 30,000. While easing notorious crowding, the contract suggests Washington is preparing for even more detentions in the future.

Camp Cropper consists of more traditional cellblock buildings. Among its roughly 4,000 inmates are hundreds of juveniles. Cropper is a site of ongoing interrogation and it holds many long-term detainees who complain that they never see the light of day. Though recently expanded, the facility suffers from overcrowding, poor medical attention and miserable conditions.

U.S. forces are holding nearly all of these persons indefinitely, without an arrest warrant, without charge, and with no opportunity for those held to defend themselves in a trial. While the United States has put in place a formal review procedure that supposedly evaluates all detainees for release on a regular basis, detainees cannot attend these reviews, cannot confront evidence against them, and cannot be represented properly by an attorney. Families are only irregularly notified of the detentions, and visits are rarely possible.

The detention facilities are closed to human rights monitors like Amnesty International, Human Rights Watch, or the International Federation of Human Rights. Even the United Nations Assistance Mission in Iraq, mandated by the Security Council to provide human rights reporting, is denied access by the U.S. command. Lack of such monitors greatly increases the likelihood that detainees will suffer from abuse and bad conditions, as human rights organizations have often pointed out.

Read all of it here. / Foreign Policy in Focus / Common Dreams

This entry was posted in RagBlog and tagged Criminal Justice, Human Rights, Iraq. Bookmark the permalink.