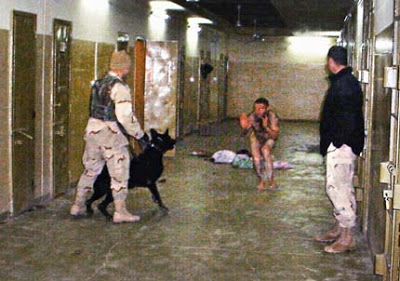 “I Was Only Following Orders!” Being serious about torture. Or not.
By William Blum / March 5, 2009

In Cambodia they’re once again endeavoring to hold trials to bring some former senior Khmer Rouge officials to justice for their 1975-79 war crimes and crimes against humanity. The current defendant in a United Nations-organized trial, Kaing Guek Eav, who was the head of a Khmer Rouge torture center, has confessed to atrocities, but insists he was acting under orders.1

As we all know, this is the defense that the Nuremberg Tribunal rejected for the Nazi defendants. Everyone knows that, right? No one places any weight on such a defense any longer, right? We make jokes about Nazis declaring: “I was only following orders!” (“Ich habe nur den Befehlen gehorcht!“) Except that both the Bush and Obama administrations have spoken in favor of it.

Here’s the new head of the CIA, Leon Panetta: “What I have expressed as a concern, as has the president, is that those who operated under the rules that were provided by the Attorney General in the interpretation of the law [concerning torture] and followed those rules ought not to be penalized. And … I would not support, obviously, an investigation or a prosecution of those individuals. I think they did their job.”2 Operating under the rules … doing their job … are of course the same as following orders.

The UN Convention Against Torture (first adopted in 1984), which has been ratified by the United States, says quite clearly, “An order from a superior officer or a public authority may not be invoked as a justification of torture.” The Torture Convention enacts a prohibition against torture that is a cornerstone of international law and a principle on a par with the prohibition against slavery and genocide.

Of course, those giving the orders are no less guilty. On the very day of Obama’s inauguration, the United Nation’s special torture rapporteur invoked the Convention in calling on the United States to pursue former president George W. Bush and defense secretary Donald Rumsfeld for torture and bad treatment of Guantanamo prisoners.3

On several occasions, President Obama has indicated his reluctance to pursue war crimes charges against Bush officials, by expressing a view such as: “I don’t believe that anybody is above the law. On the other hand I also have a belief that we need to look forward as opposed to looking backwards.” This is the same excuse Cambodian Prime Minister Hun Sen has given for not punishing Khmer Rouge leaders. In December 1998 he asserted: “We should dig a hole and bury the past and look ahead to the 21st century with a clean slate.”4 Hun Sen has been in power all the years since then, and no Khmer Rouge leader has been convicted for their role in the historic mass murder.

And by not investigating Bush officials, Obama is indeed saying that they’re above the law. Like the Khmer Rouge officials have been. Michael Ratner, a professor at Columbia Law School and president of the Center for Constitutional Rights, said prosecuting Bush officials is necessary to set future anti-torture policy. “The only way to prevent this from happening again is to make sure that those who were responsible for the torture program pay the price for it. I don’t see how we regain our moral stature by allowing those who were intimately involved in the torture programs to simply walk off the stage and lead lives where they are not held accountable.”5

One reason for the non-prosecution may be that serious trials of the many Bush officials who contributed to the torture policies might reveal the various forms of Democratic Party non-opposition and collaboration.

It should also be noted that the United States supported Pol Pot (who died in April 1998) and the Khmer Rouge for several years after they were ousted from power by the Vietnamese in 1979. This support began under Jimmy Carter and his National Security Adviser, Zbigniew Brzezinski, and continued under Ronald Reagan.6 A lingering bitterness by American cold warriors toward Vietnam, the small nation which monumental US power had not been able to defeat, and its perceived closeness to the Soviet Union, appears to be the only explanation for this policy. Humiliation runs deep when you’re a superpower.

Neither should it be forgotten in this complex cautionary tale that the Khmer Rouge in all likelihood would never have come to power, nor even made a serious attempt to do so, if not for the massive American “carpet bombing” of Cambodia in 1969-70 and the US-supported overthrow of Prince Sihanouk in 1970 and his replacement by a man closely tied to the United States.7 Thank you Richard Nixon and Henry Kissinger. Well done, lads.

By the way, if you’re not already turned off by many of Obama’s appointments, listen to how James Jones opened his talk at the Munich Conference on Security Policy on February 8: “Thank you for that wonderful tribute to Henry Kissinger yesterday. Congratulations. As the most recent National Security Advisor of the United States, I take my daily orders from Dr. Kissinger.”8

Lastly, Spain’s High Court recently announced it would launch a war crimes investigation into an Israeli ex-defense minister and six other top security officials for their role in a 2002 attack that killed a Hamas commander and 14 civilians in Gaza.9 Spain has for some time been the world’s leading practitioner of “universal jurisdiction” for human-rights violations, such as their indictment of Chilean dictator Augusto Pinochet a decade ago. The Israeli case involved the dropping of a bomb on the home of the Hamas leader; most of those killed were children. The United States does this very same thing every other day in Afghanistan or Pakistan. Given the refusal of American presidents to invoke even their “national jurisdiction” over American officials-cum-war criminals, we can only hope that someone reminds the Spanish authorities of a few names, names like Bush, Cheney, Rumsfeld, Powell, Rice, Feith, Perle, Yoo, and a few others with a piece missing, a piece that’s shaped like a conscience. There isn’t even a need to rely on international law alone, for there’s an American law against war crimes, passed by a Republican-dominated Congress in 1996.10

The noted Israeli columnist, Uri Avnery, writing about the Israeli case, tried to capture the spirit of Israeli society that produces such war criminals and war crimes. He observed: “This system indoctrinates its pupils with a violent tribal cult, totally ethnocentric, which sees in the whole of world history nothing but an endless story of Jewish victimhood. This is a religion of a Chosen People, indifferent to others, a religion without compassion for anyone who is not Jewish, which glorifies the God-decreed genocide described in the Biblical book of Joshua.”11

It would take very little substitution to apply this statement to the United States — like “American” for “Jewish” and “American exceptionalism” for “a Chosen People”.

[William Blum is the author of:

* Killing Hope: US Military and CIA Interventions Since World War 2
* Rogue State: A Guide to the World’s Only Superpower
* West-Bloc Dissident: A Cold War Memoir
* Freeing the World to Death: Essays on the American Empire

Portions of the books can be read, and signed copies purchased, at www.killinghope.org.]

This entry was posted in RagBlog and tagged Crimes Against Humanity, Criminal Justice, Torture, War Crimes. Bookmark the permalink.