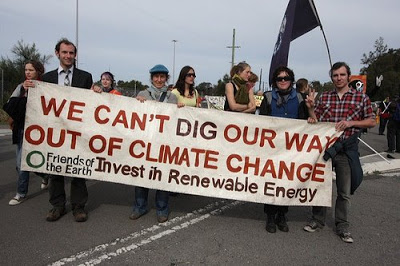 This is not youthful rebellion. We see the catastrophe ahead
By Joss Garman / March 8, 2009

Great Britain: Climate change has provoked a war between the generations. Younger members of the government need to choose their side.

Lily Kember is 21 years old. Late last year, with 50 other activists, she shut down Stansted airport, in the process preventing thousands of tonnes of CO2 being released into the atmosphere. A few minutes before her arrest she told listeners of the Today programme: “We’re here because our parents’ generation has failed us and it’s now down to young people to stop climate change by whatever peaceful means we have left.”

She was by no means the youngest person who cut through the security fence that December morning – one of her co-protesters was born in 1991. You might conclude something extremely interesting is happening when kids are bunking off school not to play the arcades but instead to risk jail by invading runways to indict an entire generation. Last week it was my friend Leila Deen throwing custard over Peter Mandelson and twentysomethings in Aberdeen getting on to another runway to protest against airport expansion. In the summer 29 others will go on trial for hijacking a train that was carrying coal to Drax power station. Meanwhile in the US 12,000 young people last week marched on the coal plant that provides power to congress to demand that the new president act on his promise to “roll back the spectre of a warming planet”.

Contrast this explosion of determined political activity by society’s youngest voters with the image of Mandelson banging his head on the cabinet table. He was, according to the newspapers, frustrated that some of his younger colleagues had failed to grasp the ineluctable logic of his argument in favour of making Heathrow airport the biggest single point-source of carbon in the UK. The intergenerational gap articulated so poignantly by Lily Kember most certainly exists, and it’s getting wider. 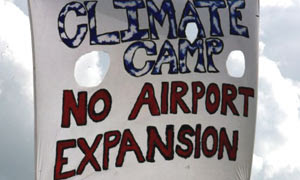 ‘This is not a fad’: one of the activists at last summer’s climate change camp protesting against plans for a third runway at Heathrow. Photograph: Graeme Robertson.

Some social commentators have placed this burgeoning carbon movement in the same bracket as earlier social movements populated by young people. They say the Sixties was the anti-war decade; the Seventies saw marches against racism at home and apartheid abroad; if it’s the Eighties it must be Ban the Bomb and Maggie Out!; the Nineties was roads and anti-globalisation; and the Noughties, this decade, is about climate change. We’ll soon be on to something else, right?

Wrong. We’re not the Noughties. This isn’t the next fad. The naive popular narrative that “every generation has their thing” and that climate is ours – that we’re the “Facebook generation” – simply does not hold. This isn’t about being disaffected and rebellious without a cause. This isn’t about dropping out, rejecting the norm, culture jamming and hacking the system. This isn’t even about altruism. It’s not just about defending the rights and lives of those who are less fortunate than us, and it certainly isn’t about polar bears. This is about us. For the millennial generation the patronising cliches fall apart, because this isn’t about ideals so much as hard science and the terrifying reality that what the scientists have been warning us all about for years – those sea level rises, catastrophic droughts and melting ice caps – will now happen in our lifetimes.

So we become angry when we witness the same generation which let the economic system collapse, and that is leaving my generation with an unfathomable burden of debt – Brown and Mandelson and the old men of politics – now knowingly setting us on another disastrous course. We know how this story ends, but not because we’ve read obscure economic treatises or dense theories from Friedman and Hayek or Hobsbawm and Marx. We know because scientists are providing measurable objective evidence that the high-carbon economic model has an in-built self-destruct mechanism.

The only difference between capitalism in crisis and the climate crisis is that almost nobody predicted the economic collapse, whereas almost every single qualified expert predicted with steady and unerring accuracy the effect that carbon dioxide is having on the climate. Now compare the reactions of our leaders to the two crises. If the world was a bank, Brown would have saved it already. Instead it is my generation, with our taxes for decades to come, which is bankrolling a bail-out that ranks at the bottom of the developed world for its focus on greening the economy. For us it’s all pain and no gain.

For us there’s no difference between the scant regard paid by President Bush for the victims of Hurricane Katrina, and the attitude taken by these British baby-boomer politicians who gave us dodgy Saudi arms deals then blocked the inquiry because they value oil over truth. They stole our right to protest outside parliament and now they try to mollify us with sombre talk of “tough decisions for turbulent times” before attacking us for “silly stunts” (as Geoff Hoon did last week) when we get a bit uppity about climate change. Increasingly, as I can testify, his generation even resorts to political policing and legal injunctions.

Yet against this gloomy backdrop emerges what US marketers Eric Greenberg and Karl Weber have called “history’s most active volunteering generation” – or “Generation We”. Independent of the old ideologies and tribal loyalties that have stained mainstream politics in Britain, we’re determined to capture the moment. We believe 2009 can be a transformative year, that the economic crisis presents an opportunity to reject old assumptions just as the ecological crisis focuses minds on the last chance UN climate summit in Denmark in December. The Copenhagen meeting has the potential – more than any gathering of human beings before it – to affect how our civilisation develops. This is Westphalia, Versailles and Bretton Woods rolled into one, and it’s happening this year.

Some of you who have read this far will by now be sniggering with cynicism, and when this article is published online many of the comments will exhibit a similar scorn. But with respect to the keyboard commandos, we’ll take our cue instead from Professor James Hansen, director of Nasa’s Goddard Institute for Space Studies who said: “In the nuclear standoff between the Soviet Union and United States, a crisis could be precipitated only by the action of one of the parties. In contrast, the present threat to the planet and civilisation requires only inaction in the face of clear scientific evidence of the danger.”

So inaction is the greatest threat, and that’s why young people are breaking through airport fences and shutting down coal plants. Because rather like the Israeli government building West Bank settlements on land that’s supposed to be under negotiation in an effort to scupper a Middle East peace deal, our own governments are creating “facts on the ground” in the run up to Copenhagen – at Heathrow and Kingsnorth for example – which will destroy what hope we have of striking a deal in December. And we won’t let them get away with it.

Ed Miliband, the energy and climate change secretary, is 39 years old. He is closer in age to Lily Kember than he is to Gordon Brown, and on his desk today sits the Kingsnorth decision which, according to Professor Hansen, has “the potential to influence the future of the planet”. Our best chance of arresting runaway climate change, says Hansen, is to rule out new coal plants unless all of their emissions are captured and buried. If Miliband stands up to his older colleagues and demands – on pain of resignation – that the UK, the nation where the industrial revolution was born, the nation with a greater historical per capita responsibility for climate change than any other, will no longer emit CO2 from coal, then we might have found a British politician we can finally believe in.

It’s time for Ed Miliband to decide which generation he is with. Ours, or Brown’s.

[Joss Garman is co-founder of Plane Stupid and a columnist for the Ecologist.]