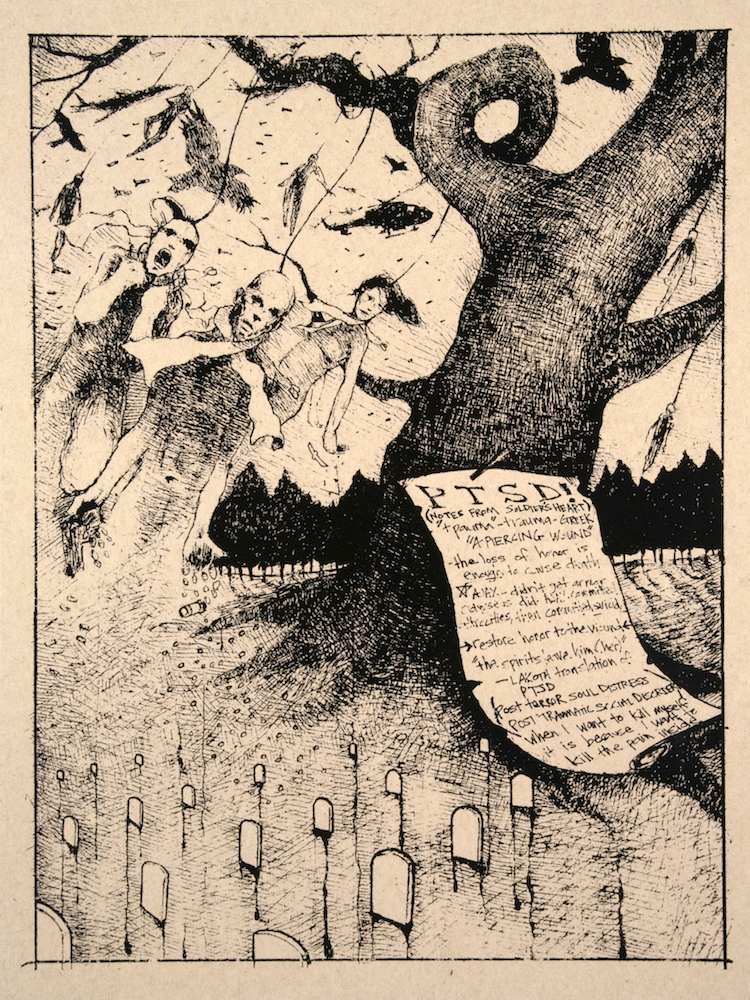 AUSTIN —  An exhibition of the War is Trauma poster portfolio will mark the 13th anniversary of the invasion of Iraq Saturday, March 19, 2016, at the First Unitarian Universalist Church of Austin. Local members of Iraq Veterans Against the War (IVAW) and the Civilian-Soldier Alliance are hosting the exhibit.

War is Trauma is a portfolio of handmade prints — the product of a collaboration of the Justseeds Artists Cooperative and the Iraq Veterans Against the War (IVAW). The collaboration grew out of a street poster project in 2010 where posters were pasted up in public, replacing many corporate ads, to focus public attention on those issues not being discussed — GI Resistance, Post Traumatic Stress Disorder (PTSD), Military Sexual Trauma (MST) as the result of assault in the military, and Traumatic Brain Injury (TBI).

It is powerful art and a healing force for the veterans who converted their trauma into art. For the public, this exhibit is a stark reminder of the wars without an end in sight, a reminder of the trauma visited on so many.

The prints are housed in a handmade cover from the Combat Paper Project (CPP). The paper is made from military uniforms that veterans have cut into small pieces, mixed with water, and pulped into paper as part of the healing process.

The batch that I made for the portfolio is mostly created from Army Combat Uniforms that we were worn with the Stryker battalions out of Fort Lewis, WA. These are the same guys who rolled out of Iraq early back in July 2010. I also added Egyptian cotton to strengthen it. I like to imagine that the mill workers who made the cloth I used were the same one’s rising up last spring.