The Time Has Come to Turn a New Page 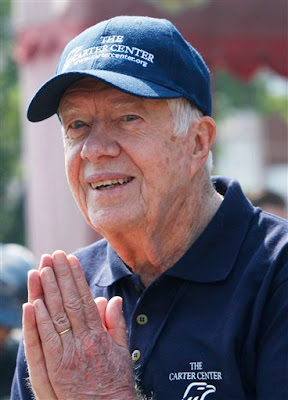 To
Mr. Jimmy Carter
Former President of the United States

I am writing to you on behalf of Gush Shalom, The Israeli Peace Bloc, to congratulate you on your wise and courageous decision to meet in Damascus with Hamas leaders and talk with them on the ways to promote peace in our region. I believe this is an act whose time had come – or rather, is already long overdue – and I would have liked the Government of Israel to avail itself of your position, your prestige and your tireless energy, in order to help end the suffering and bloodshed among both peoples.

As an increasing number of people are coming to realize, the policy of boycotting Hamas, starting on the day that the movement won the democratic elections held among the Palestinians, has failed utterly and caused terrible suffering and bloodshed to both peoples. The Government of Israel, with the support of the present US Administration, has undertaken large and small military operations; constantly sought to foment civil war among Palestinians; and imposed an inhuman economic boycott of the Gaza Strip, which exactly today reaches a cruel new peak with the denial of fuel to a million and half people. Not only did all these acts fail to break Hamas’ power; on the contrary, they resulted in increasing its popular support and severely weakening Mahmud Abbas (Abu Mazen) who is more and more perceived as a collaborator, unable to bring his people any real achievement.

The time has come to turn a new page, based on recognition of reality: Hamas is a significant force among Palestinians, and will continue to be such, for better or worse, in the foreseeable future. It is impossible to reach an Israeli-Palestinian Agreement – and actually implement it – without Hamas being a party to that agreement.

Your visit to our region, Mr. President, has the potential of imparting an enormous momentum to removing the obstacles presently hindering serious negotiations aimed at ending the Israeli-Palestinian conflict and the Israeli occupation of Palestinian lands conquered in 1967. To the mind of myself the my fellow activists, what is most urgently needed at present includes:

* A full ceasefire, between all Israelis and all Palestinians, which will proved a safe daily life to the inhabitants of the Gaza Strip as to those of the Israeli communities near to it;

* Removal of the shameful economic siege, which is a terrible collective punishment for Gaza inhabitants of Gaza;

* Encouraging the creation of a Palestinian National Unity Government, representing all important factions and able to negotiate on behalf of the entire Palestinian people – instead of the complete veto which the governments of Israel and the US at present impose on the creation of such a government among Palestinians.

It would have been best for all of us, Mr. President, were you able to go to Damascus with a full mandate from the Government of Israel and from you successor in the White House, to promote to the best of your ability the solution to the conflict in our region and the end to both peoples’ suffering. But even in the absence of an official government mandate, know that you are going to Damascus with the warm regards and full support of the peace seekers in Israel. 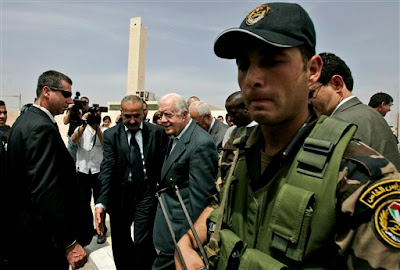 And now for a little flashback:

Jimmy Carter: Give Hamas a chance: Former president says U.S. should not cut off aid to Palestinians
Thursday, February 2, 2006

(CNN) — Hamas deserves to be recognized by the international community, and despite the group’s militant history, there is a chance the soon-to-be Palestinian leaders could turn away from violence, former President Jimmy Carter said Wednesday.

Carter, who monitored last week’s Palestinian elections in which Hamas handily toppled the ruling Fatah, added that the United States should not cut off aid to the Palestinian people, but rather funnel it through third parties like the U.N.

“If you sponsor an election or promote democracy and freedom around the world, then when people make their own decision about their leaders, I think that all the governments should recognize that administration and let them form their government,” Carter said. (Watch the former president cautiously defend Hamas — 4:35)