The Waste, the Fraud, and the Abuse : Staggering 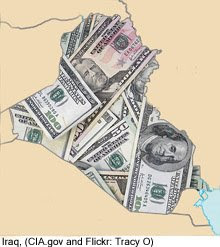 The North Dakota senator has made investigating contractor corruption his mission, but will he succeed in creating a congressional committee devoted to it?

In the wake of a recent Defense Department report from the Office of Inspector General that documents (PDF file) the improper accounting of billions of dollars in war contracting funds, the issue of waste, fraud, and abuse in Iraq is once again in the spotlight on Capitol Hill.

Those findings were amplified on Tuesday when the Project on Government Oversight, a Washington-based watchdog group, obtained a separate inspector general report that found that the number of Pentagon auditors overseeing military contracts has not kept pace with defense spending, which has doubled under the Bush administration — creating conditions that are ripe for corruption and abuse.

While Congress has launched sporadic inquiries into contracting fraud, one legislator, Sen. Byron Dorgan, D-N.D., has made it his mission to investigate contractor corruption.

Dorgan chairs the Democratic Policy Committee, a Senate entity tasked with gathering and distributing policy, strategy, and oversight information to congressional staff and other Democratic officials. (There is also a Republican Policy Committee.) Since 2003, the DPC has held 14 hearings dedicated to exposing the corruption of the Iraq reconstruction effort, and last month the committee released an encyclopedic report detailing major examples of fraud.

When the war in Iraq began, says Dorgan, “no one really [decided] to say, ‘All right, now we’re going to be an investigative committee so there’s accountability.’” In order to fill the void, Dorgan decided to use his committee for that purpose — though its oversight authority is somewhat diminished by the fact that the panel, as a partisan committee, lacks subpoena power. In light of this, since 2005 Dorgan has attempted to establish a congressional committee with full oversight clout to oversee military contracting. Dubbed the Special Committee on War and Reconstruction Contracting, the proposed panel is modeled on the Senate Special Committee to Investigate the National Defense Program (commonly known as the Truman committee), which was charged with investigating the waste and corruption of billions of dollars of World War II-era defense contracts.

So far legislation to create a committee to oversee contracting for the wars in Afghanistan and Iraq hasn’t gained traction. During the previous Congress, which ended in December 2006, Dorgan’s resolution was swatted down three separate times along partisan lines. (In each case, presumptive GOP presidential nominee John McCain voted with the Republican majority to nix the committee.)

A Dorgan aide says that the third-term senator plans to introduce his proposal again within the year, and is currently looking for Republican co-sponsors, which he believes will improve his chances of passing the bill. In the past, the only Republican to vote in favor of the commission was Lincoln Chaffee of Rhode Island, who lost his seat during the Democratic landslide in November of 2006. So Dorgan’s contracting committee is still a long shot.

Other senators have taken a milder approach to the idea of a modern-day Truman committee. Last year, Sen. Jim Webb, D-Va. — along with all of his fellow freshman Democrats in the Senate — sponsored a measure mandating the creation of an independent bipartisan commission (distinct from a congressional committee, which has subpoena power) to “investigate U.S. wartime contracting in Iraq and Afghanistan.” The measure passed unanimously last September as an amendment to the Defense Authorization Act, only to be written out of existence by a presidential signing statement when the bill hit President Bush’s desk in January.

If Dorgan gets his way, it could substantially bolster the Democrats’ efforts to uncover and deter acts of fraud and corruption in war contracting. Currently those efforts have been driven almost exclusively by House Oversight Committee Chairman Rep. Henry Waxman, D-Calif., and Senate Armed Services Committee Chairman Carl Levin, D-Mich. Since taking the House oversight gavel in January 2007, Waxman has held a host of hearings on defense contracting fraud, with a particular emphasis on the companies, like Blackwater and KBR, that have been some of the biggest beneficiaries of the war in Iraq.

Levin has spotlighted the issue of contractor fraud on a number of occasions, but, like Waxman, the focus of his committee extends well beyond contracting oversight. The existing congressional committees, Dorgan says, “have not had the investigators and the time,” to give this issue the focus it deserves. “So, we have held these hearings, and the waste, the fraud, and the abuse is staggering.”

This entry was posted in RagBlog and tagged Capitalism, Corruption, Iraq, U.S. Government. Bookmark the permalink.