They Flatter You, Flummox You, Fool You 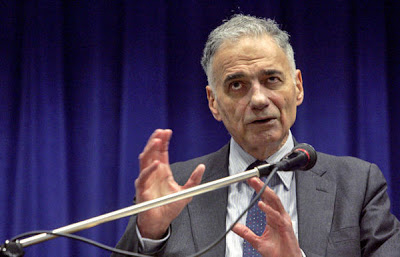 Ralph Nader calls for civic engagement Wednesday in Tacoma.
Janet Jensen/The News Tribune
Ralph Nader says, vote for ‘none of the above’
By Niki Sullivan, Jun 14, 2008

Ralph Nader says if not him, then vote for ‘none of the above’

May 15th, 2008 – Ralph Nader is still running for president. But in Tacoma on Wednesday, his pitch for another option on the ballot was just as impassioned.

“‘None of the above’ will get more people out to the polls!” he said.

Nader said a “none of the above” option on ballots would help break up what he called the “two-party dictatorship” because it would bring more voters out and, if their noncandidate won, another election would have to be held 30 days later.

“How many people would like that?” he asked a crowd of about 90 at Tacoma Community College. The majority of hands shot up.

During his two-hour engagement, Nader spoke about everything from the Iraq war – “You go to fight terrorists and you create more of them” – to the state of the nation – “We’re fed a line of propaganda. … This isn’t the greatest country in the world.”

It’s the antithesis of the messages of hope and prosperity he said other candidates are peddling.

“They flatter you, flummox you, fool you,” he said of Barack Obama, Hillary Rodham Clinton and John McCain.

And that’s his goal.

“Am I making you a little indignant? If I don’t, I’m not communicating,” he said.

He encouraged the crowd, a mix of students and community members, to learn about civic engagement and work to end political apathy.

“If you don’t turn on politics, politics is going to turn on you,” he said to cheers.

He also railed against corporations, telling the crowd that corporate influence in politics has crossed the line.

“Time and time again, they side with big business,” he said of lawmakers.

He said he’s the one candidate who’s been “of the people, by the people and for the people for 40 years.”

His message was strong, but he didn’t top it with much pressure to vote for him. Instead, he encouraged audience members to “at least let Obama, McCain and Clinton know what you want.”

This time around, Nader said, he expects to get more votes than the 3 million cast for him in 2000. Nader is widely blamed by Democrats for siphoning votes from Democrat Al Gore that year, enabling Republican George W. Bush to win the White House.

“This time, we’re going to do much better,” he said.

“We need a president that’s a part of the people, not an impersonal figure,” Mize said. He’s voted for Nader in the past, and volunteered last week for his campaign, phoning voters in Oregon.

Mize plans to become even more involved in the campaign in advance of the November elections because “the other chowderheads don’t seem to give a (expletive) about us,” he said. “Nader all the way!”

Others were more curious than supportive. Aaron DeVore, a 21-year-old University of Puget Sound student, rode his bike to TCC just to hear what Nader had to say.

“I really admire all the stuff that Nader has done,” he said. Still, DeVore has no intention of voting for him: He’ll cast his first presidential vote for Obama.

DeVore also said he was concerned that Nader continues to run for president, potentially draining votes from the Democratic ticket.

Portland lawyer Greg Kafoury told the crowd that a candidate such as Nader “comes around once a century.”

“Think of this campaign – there’s corporate Republicans and corporate Democrats. That’s not the answer,” he said, before coaxing financial donations from the crowd to Nader’s campaign.

Nader took questions from the crowd and signed books briefly before leaving for a campaign event in Seattle.

Background: He wrote “Unsafe at Any Speed,” an indictment of the auto industry’s safety failures, in 1965. He’s credited with helping to create the Consumer Product Safety Commission, the Safe Drinking Water Act, the Freedom of Information Act and the Occupational Safety and Health Administration.

2 Responses to They Flatter You, Flummox You, Fool You