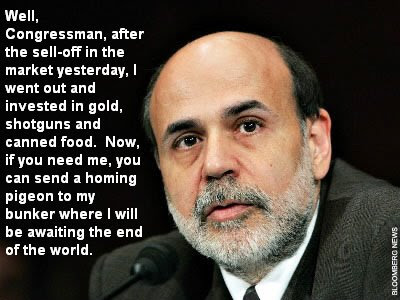 Momentum is building for a fresh dose of economic stimulants to boost the country out of the doldrums – perhaps by putting more money in Americans’ pockets. The White House said Monday that President Bush was open to some sort of action after Federal Reserve Chairman Ben Bernanke warned the slump could drag on without the extra bracing tonic.

On Wall Street, stocks bolted higher, with the Dow Jones industrials rising 413 points. There also were some new signs that credit conditions were thawing a bit.

The national economy, already wobbling, has been rocked by a trio of hard punches from the housing, credit and financial crises. With a recession widely seen as inevitable, if not already under way, the focus in Washington has shifted to the questions of how bad, how long and how to limit the pain.

There is increasing talk of a post-election special session calling Congress back to the Capitol. But urgency varies greatly according to whom you talk to – and when.

“We’re continuing to have conversations with members of Congress, and we’re open to ideas that they would put forward … that would stimulate the economy and help us pull out of this downturn faster,” White House press secretary Dana Perino said around noon Monday, shortly after Bernanke endorsed the need for a fresh and “significant” round of government action.

A couple of hours later, Bush seconded Perino’s remarks, but he also said in a more optimistic tone: “I have heard that people’s attitudes are beginning to change from a period of intense concerns – I would call it near panic – to being more relaxed.” He commented after a closed meeting with business leaders in Alexandria, La.

If congressional leaders and Bush – who has been cool to more federal stimulus spending given already exploding budget deficits – were to hash out an acceptable package, it would require a special session after the Nov. 4 elections.

If an agreement can’t be worked out, the effort probably would be taken up by the next Congress and the next president. Democrat Barack Obama has strongly advocated more government stimulus, while Republican John McCain is keeping his options open.

House Speaker Nancy Pelosi of California and fellow congressional Democrats are pushing a package that could cost as much as $150 billion. Some economists, however, have advised them in recent days that to have a real impact, the total would have to be far larger, as much as $300 billion.

As part of that package, Democrats want to resurrect a $61 billion House-passed measure that included about $37 billion in public works spending, $6 billion to extend jobless benefits, $15 billion to help states to pay their Medicaid bills and $3 billion in food stamp assistance for the poor.

The Democrats also are considering a second round of tax rebates to follow the $600 to $1,200 checks most individuals and couples got earlier this year. That money, going directly to consumers in hopes they would spend it, could push the price tag much higher.

Unemployment – now at 6.1 percent – is expected to hit 7.5 percent or higher next year. And millions of Americans have been watching their retirement nest eggs and home values shrivel.

One-third of Americans are worried about losing their jobs, half fret they will be unable to keep up with mortgage and credit card payments, and seven in 10 are anxious that their stocks and retirement investments are losing value, according to an Associated Press-Yahoo News poll of likely voters released Monday.

Sen. Charles Schumer, D-N.Y., a member of the Democratic leadership, predicted Congress would return in November. “We couldn’t have gotten a better supporter for a stimulus package than Ben Bernanke,” Schumer said. “His support will change the stimulus from a possibility to a reality.”

Pelosi said, “I call on President Bush and congressional Republicans to once again heed Chairman Bernanke’s advice and as they did in January, work with Democrats in Congress to enact a targeted, timely and fiscally responsible economic recovery and job creation package.”

However, in an interview with The Associated Press last Friday, Pelosi had said Congress is unlikely to approve a tax rebate before Bush leaves office, and she signaled that prospects were dim that Democrats would be able to strike a deal with the president on an economic aid package during a post-election session.

In February, Congress enacted a $168 billion stimulus package that included tax rebates for people and tax breaks for businesses. The rebate checks did help to lift economic growth in the spring. After that, though, consumers cut back sharply and businesses have retrenched in turn.

“With the economy likely to be weak for several quarters, and with some risk of a protracted slowdown, consideration of a fiscal package by the Congress at this juncture seems appropriate,” Bernanke told the House Budget Committee. It marked the first time Bernanke endorsed the need for another round of economic stimulus.

The Fed chief suggested that Congress design the package to limit the longer-term affects on the government’s budget deficit, which hit a record in the recently ended budget year and is undoubtedly headed higher.

Bernanke said the package also should include provisions “to help improve access to credit by consumers, home buyers, businesses and other borrowers.”

He also left the door open to further interest rate reductions by the Federal Reserve itself.

Fed policymakers meet next on Oct. 28-29, and many economists believe they will again lower their key rate – now at 1.50 percent – to bolster the economy. Just a few weeks ago, the Fed and the world’s other major central banks joined forces to ratchet down rates, the first coordinated action of that kind in the Fed’s history.

There were some signs that credit problems were improving a bit. Bank-to-bank lending rates fell for a sixth straight day on Monday. Demand for Treasury bills, regarded as the world’s safest investment, lessened somewhat but remained relatively high in a sign that there was still much fear in the markets.

Last week, the Treasury Department announced it would inject up to $250 billion in U.S. banks in return for partial ownership. So far this year, 15 banks have failed, including the largest U.S. bank failure in history, compared with three last year. And major Wall Street investment firms have been swallowed by other companies, have filed bankruptcy or have converted themselves into commercial banks to weather the financial storm.