Bill Ayers and Bernardine Dohrn host an entertaining and provocative discussion at The Rag Blog‘s launch party for its new website, January 17, 2014. Video by Bob Simmons / The Rag Blog. You can also watch it on YouTube.

The event, produced by the Friends of New Journalism, featured live performance by the Melancholy Ramblers, ample beer and barbeque, and an hour-long presentation by activist-scholars — and former Weather Undergrounders — Bill Ayers and Bernardine Dohrn, who had been our guests on Rag Radio earlier that day.

One of those in attendance — a prominent Texas civil liberties lawyer — called it the “best public discussion I’ve ever attended.”

Dohrn started it off, saying, “We thought we’d jump in without much ado to [talk about] the issues that are bubbling up and in our face,” and then to “trade ideas of where we’re going and why, and how we can live differently so others can live.” 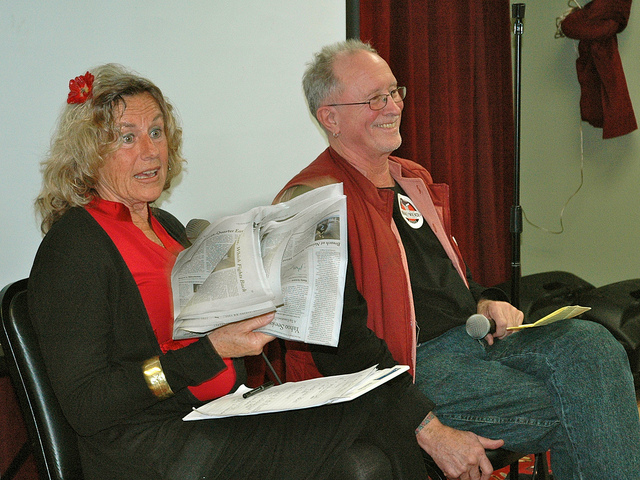 The wide-ranging discussion covered war and peace, prisons, workers’ rights, public education, the Occupy Movement, and the “mythology of the Sixties.” And Ayers’ heads-up about a potential American-style fascism that would include bike lanes and legal marijuana.

Ayers noted that those on the left “spend a lot of time being too easily defeated” and that we should remember that “movements are always about process.” The important thing, he said, “is that we don’t give up, that we give each other strength.”

He ended by paraphrasing Rosa Luxemburg who, in a letter from prison, asked her supporters to “stop whining.”Her second suggestion: “You have to become a mensch.” (“Mensch is Yiddish for “human being” and, according to Merriam Webster, is “a person of integrity and honor.”)

Luxemburg said, in effect, that “you have to love the world enough to put your shoulder on history’s wheel when history requires it.” And, Ayers added, “You have to love yourself enough that you are powered to move forward.”

Austin renaissance media man Bob Simmons captured the entire presentation in a polished and riveting video. You can watch the video, edited by Simmons and Jasper McCollum, at the top of this piece or at YouTube. And also check out Bob’s excellent video of our Rag Radio interview with Ayers and Dohrn, as well as the podcast of that show, here.

The Rag Blog is a progressive Internet news magazine that has hosted more than 10,000 posts and 2 million unique visits since its inception in 2006. Along with Rag Radio, The Rag Blog is a digital-age rebirth of Austin’s legendary underground newspaper, The Rag, published from 1966-1977. The Rag Blog is published by the New Journalism Project, a Texas 501(c)(3) nonprofit.

[Thorne Dreyer edits The Rag Blog, hosts and produces Rag Radio, and is on the board of directors of the New Journalism Project. A pioneer of the 60s underground press, Dreyer was a founding editor of Austin’s legendary underground newspaper, The Rag, was an editor at Space City! in Houston and Liberation News Service in New York, and managed Pacifica’s KPFT-FM in Houston.]

[Videographer Bob Simmons has a storied career in radio, where he was a pioneer in the underground format in the ’60s and ’70s, and has been a producer and personality at legendary stations in places like San Francisco, Austin, and Portland. Simmons also has been an oil biz entrepreneur, voice talent, construction worker, newspaper publisher, writer, and sports editor.]