The legendary ’60s Austin happening returns as part of a 4-day celebration of the original Rag. 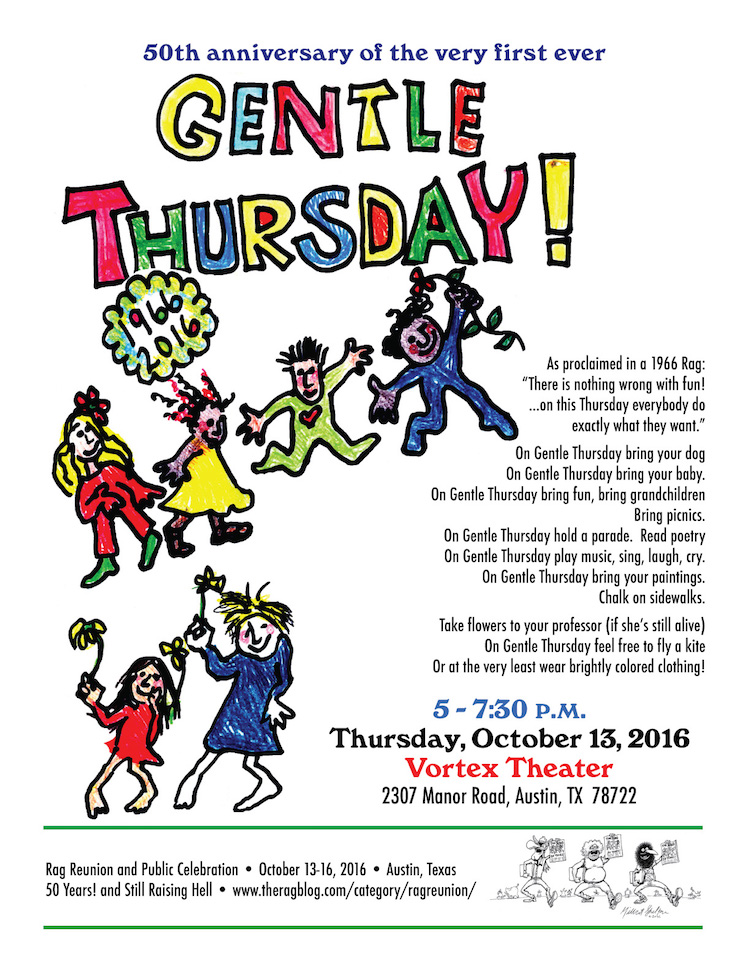 Poster designed by Trudy Stern. Trudy, then Trudy Minkoff, also
created the art for the first Gentle Thursday in 1966.

Gentle Thursday returns! The “celebration of fun” is at Vortex Theater, Thursday, October 13, 2016, 4:30-7 p.m. This outdoor event serves as a reunion and remembrance of the SDS- and Rag-sponsored Gentle Thursday happenings that helped transform the UT campus and community in the late ‘60s.

The original Gentle Thursday was organized by SDS and The Rag in October 1966, “as a celebration of our belief that there is nothing wrong with fun.” (See “Gentle Thursday” article from Celebrating The Rag, below.)

There will be an open mic outdoor stage at the Vortex Theater, 307 Manor Road, with live music and spoken word. Everyone is invited to make some music with us or to read a poem or two. And all are encouraged to wear lively clothing and to bring dogs, children, balloons, and musical instruments. Wear your tie-dye and peace buttons!

There will also be registration for those attending the Rag Reunion, and the book, Celebrating The Rag: Austin’s Iconic Underground Paper, will be available for purchase, as will be the commemorative t-shirt with new Freak Brothers art, created for the occasion by Gilbert Shelton. 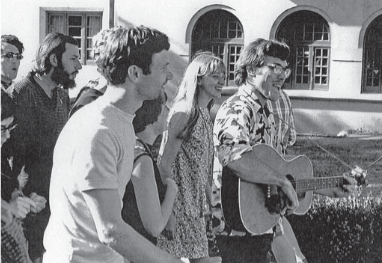 The following background piece on the original Gentle Thursday is reprinted from the book, Celebrating The Rag: Austin’s Iconic Underground Newspaper, which has been published in conjunction with this year’s reunion activities and will be available at Gentle Thursday and other events during the four-day celebration.

The now-legendary Gentle Thursday — first held in the fall of 1966 — was called an “SDS circus” by Glenn Jones, writing in the book Sights on the Sixties. It was organized by SDS and The Rag “as a celebration of our belief that there is nothing wrong with fun.” It was wildly successful, with hundreds of students and area residents bringing kids, dogs, balloons, picnic lunches, and musical instruments to the West Mall of the University of Texas — beginning a several-year tradition and inspiring similar events at campuses around the country.

A second Gentle Thursday, in Spring 1967, was summarily banned by the UT administration, guaranteeing an even larger and more energetic turnout and making participation a defiant and overtly political act — and setting the stage for a perfect storm of SDS-inspired campus activism.

The second Gentle Thursday was part of “Flipped-Out Week,” organized by SDS and The Rag in conjunction with a national mobilization against the War in Vietnam. It included appearances on campus by SNCC leader Stokely Carmichael and Beat poet Allen Ginsberg and anti-war protests at the Capitol during a visit by Vice-President Hubert Humphrey.

At the same time, SDS was creating a stir on campus with its creative campaign for a slate of radical candidates for student government, including Rag staffers Gary Thiher, Alice Embree, and Dick Reavis.

A cascading series of free speech-related events led to the administration revoking SDS’ status as an approved organization and taking disciplinary action against six students. They included SDS members and Rag staffers Gary Thiher, Alice Embree, Dick Reavis, David Mahler, and Tom Smith, as well as the president of the University Young Democrats, John Lefeber. The university also enjoined three non-students from the UT campus for “openly opposing the United States of America in its foreign affairs.”

All this resulted in a series of large public meetings, a wider mobilization of support for SDS and opposition to the War in Vietnam, and the formation of the University Freedom Movement which drew thousands of students to massive rallies on the West Mall and changed the campus forever.