The contrast between Stein’s program and Clinton’s record of fealty to the capitalist class is stark. 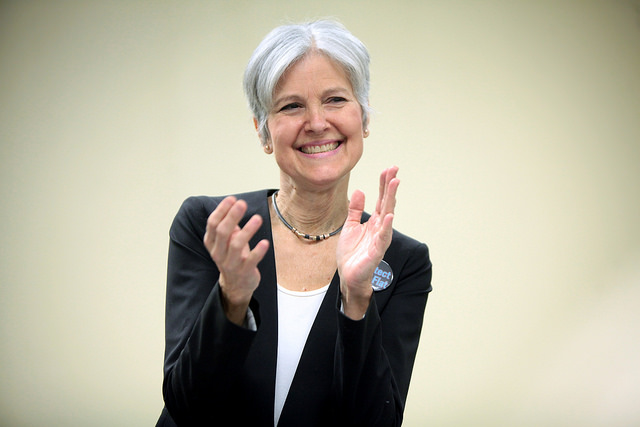 The opinions expressed in this article are those of the author and not necessarily of the editors. The Rag Blog is published by the New Journalism Project, a 501(c)(3) nonprofit, and we do not endorse political candidates.

A.  Dr. Jill Stein and the Green Party have hands down the most progressive platform of any candidate on the ballot.  The Green Party now identifies itself as eco-socialist, in recognition of the fact that unbridled capitalism is incompatible with human survival.

If you consider yourself a socialist, the contrast between Stein’s program and Clinton’s record of fealty to the capitalist class is stark.  And whereas the major party platforms are window dressing they don’t really intend to accomplish, the Green Party platform is what they would actually try to see enacted were they elected.

B.  I don’t live in a swing state.  Actually, there are no swing states since Clinton will win in a landslide.

A few months ago, I wrote that there were 10 states in play.  According to prognosticator par excellence, Nate Silver, that count is now down to one, Arizona, with 11 electoral college votes or 2% of the total Electoral College votes. [All references to Nate Silver’s predictions are as of October 16, 2016.]  The other 98% is already a done deal and it is very difficult to imagine the political events that might change that.

Silver’s website (FiveThirtyEight) correctly predicted the outcome in every state in 2012.  At the moment, he has Hillary Clinton as an 87.7% likely winner nationwide and that percentage is rising.  Only in Arizona does Silver predict a race where the chances of either candidate winning are within a 10% range of probability.

The more an election becomes a landslide, the more the concept of a “swing state” becomes irrelevant.  Regardless of how Arizona goes, it would not change the outcome.  Clinton still wins easily.

Silver has Clinton as a 99.9% favorite in California and Trump an 84.9% favorite in Texas. In California, where Obama won by an average of 2.3 million, Clinton could lose a million votes to Jill Stein and still win by a million.  Texas is a state where no Democrat has won a presidential election since 1976, nor a statewide race since 1994, and where Obama lost both times by an average of 1.25 million votes.

Silver gives her a 15% chance in Texas.  The very great probability is that a vote for Clinton in Texas will count for exactly zero.  And if she did win Texas, it would mean that she was winning 40+ states and wouldn’t need Texas.  You will not see Clinton campaign in either state beyond fundraisers.

Silver has Clinton winning the Electoral College 345 to 193. RealClear Politics has its “no toss up” map showing Clinton winning by 340 to 198.  Clinton’s lead is widening daily.  Republicans are joining billionaires in rushing to Clinton’s side, showing a capitalist class consensus that its interests are best protected by the steady and proven hands of Hillary Clinton.

Clinton’s lead is not surprising given that her opponent is her biggest political asset. Donald Trump is the worst major party candidate that has been regurgitated upon the electorate in my lifetime.

It is argued, with no evidence whatsoever, that voting for Hillary in Texas will somehow help “turn Texas blue,” regardless of the fact that, even were she to win Texas, every statewide office will remain in Republican hands.  Hillary has a lot in common with Wendy Davis, who recently lost in Texas by 18%.

It is also argued that one must vote for Hillary Clinton in order to help down-ballot Democrats.  This illogical construct ignores the fact that people who support Jill Stein, might not come out to vote were she not on the ballot, will vote for progressives down ballot if they do and those are likely to be Democrats.  In that respect, Stein will be an asset to down-ballot Democrats — unless they’re running against a Green Party candidate.

C.  What’s the point of voting for Stein since she has no chance of winning?

If you are a major party candidate, winning is everything.  Not so for third parties.  Only once in U.S. history has a third party replaced one of the two dominant parties.  More commonly, third parties send a message to one of the majors, that there is a significant portion of the electorate whose interests are being ignored and that if they continue to be ignored it will be at the major parties’ peril.  Third parties have often been a catalyst for changes in one of the major parties.  Pressure from the Socialist and Communist parties influenced the FDR administration to demand socialist concessions from the capitalist class, particularly Social Security.

In order to manifest progressive values within the Democratic Party, progressives must fight for leadership, creating a party that works for the employees, not the employers: the underwater mortgage home owner instead of the mortgage bundling banksters.  That is most certainly not the case now, as demonstrated by the vast bulk of the wealth created during the Obama administration having gone to the top 1%, the capitalist ruling class.

In order to effect fundamental change in the Democratic Party, progressives should split from the existing corporate leadership of the party on matters of principle whenever that is feasible.  Opposing Hillary Clinton when it will make no difference in the ultimate outcome of the election is such an occasion.

A vote for Dr. Stein is a vote to tactically split the Democratic Party in order to attain leverage for the left that will not exist if we merely fall in line behind Hillary.  What changes is the DP willing to make to earn back the votes of progressives?  The alternative is subservience to the capitalist class that believes you have nowhere else to go, and the U.S. will remain the only developed country with no significant socialist party.

D.  Clinton record sucks.  Here is a mere sampler of my complaints.  It should be noted that these are based on what she has done, with little credence given to what she has merely said.

There is more at stake here than winning the White House.  Also of fundamental concern is who controls the Democratic Party and whether there can be a broad-based socialist party in the USA.  It is utterly clear from the current distribution of power within the DP that fundamental progressive reforms will not be accomplished without a difficult struggle and very likely, an open revolt, to change the nature of the party leadership.

Stein received 469,501 votes in 2012.  Let’s insure that she gets 10 times that many in 2016.  Hillary Clinton will win anyway, but at least we can give the corporate Democrats something to worry about.