Noted Austin storyteller Hughes is the editor of ‘Kid Me Not: an anthology by child-free women of the ’60s now in their 60s.’ 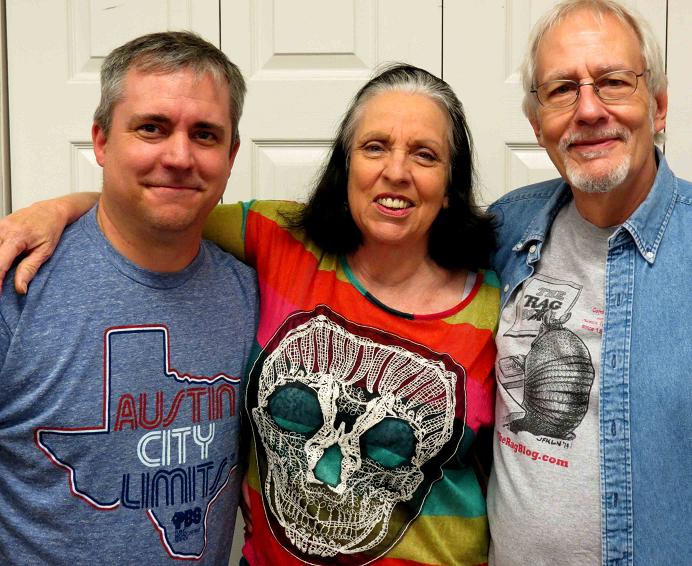 Our Rag Radio podcast features Austin performance artist, storyteller, and visual artist Aralyn Hughes, whose new book is Kid Me Not: an anthology by child-free women of the ’60s now in their 60s.

Listen to or download the podcast of our May 23, 2014, Rag Radio interview with Aralyn Hughes here:

Aralyn Hughes, known to many as the “Queen of Austin Weird,” has long been an Austin icon; for years Aralyn could be seen driving a pink, pig-themed art car, accompanied by her pet pot-bellied pig.

A performance artist, storyteller, and visual artist, Aralyn is the editor of Kid Me Not: an anthology by child-free women of the ’60s now in their 60s, a book in which a group of baby boomers (who are also her friends) reflect on how newfound liberation — thanks especially to the advent of the birth control pill — affected them and shaped their lives. Aralyn is also the subject of Love in the Sixties, a documentary film by Amparo Carcia Crow that is currently in production.

Aralyn Hughes has been a successful businesswoman, a lobbyist at the Texas State Capital, and a member of “every board and commission in Austin, Texas.” She was co-author of In the West, a long-running Austin theater piece in the ’80s that went on tour, played Kennedy Center, and was later adapted into the movie, Deep in the Heart. Aralyn has been featured on HGTV, the CBS Morning News, and the Discovery Channel as an ambassador for “Austin Weird.”

Also listen to these podcasts: