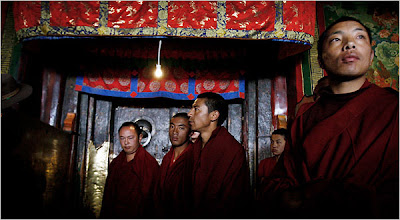 Government handlers shouted for the journalists to leave and tried to pull them away during the 15-minute protest by about 30 monks at the Jokhang Monastery in the Tibetan capital, one of Tibet’s holiest shrines. It was unclear whether the protesting monks were arrested.

The demonstration amounted to another embarrassment for China, which organized the press tour to help sway international opinion. Foreign coverage and reaction has focused on China’s heavy crackdown and arrests in the aftermath of the riots and has led to talk among some foreign officials of boycotting the Summer Olympic Games in Beijing.

The Chinese wanted the reporters invited on the tour to see damage caused by the rioters and to interview Chinese victims of the violence, the worst here in 20 years.

But during the tour of the temple, reporters said, some monks shouted that there was no religious freedom in Tibet and that the Dalai Lama, Tibet’s spiritual leader in exile, had been wrongly accused by China of responsibility for the rioting. Some journalists even said a monk complained that the government had planted fake monks in the monastery to talk to the media.

China’s official news agency, Xinhua, mentioned the unscripted protest in a brief dispatch, saying 12 monks “stormed into a briefing by a temple administrator to cause chaos.”

Some American news organizations were invited to send representatives on the three-day press tour, but The New York Times was not.

The protest came a day after President Bush encouraged President Hu Jintao of China in a telephone discussion to initiate talks with the Dalai Lama, who is exiled in India.

China’s state-run media said that Mr. Hu responded that China has always been open to discussions with the Dalai Lama, as long as he renounces independence for Tibet and abandons efforts to “fan and mastermind violent crimes.”

There was also pressure Thursday from an international group of distinguished scholars, who wrote an open letter to Mr. Hu calling on China to “take steps to end the harsh repression” in Tibet.

The scholars, who specialize in Tibetan studies and teach at some of the world’s leading universities, also said the “tactic of blaming the unrest on the Dalai Lama masks a refusal on the part of the Chinese government to recognize the failures of its own policies.”

For nearly a week, the state-controlled media have contended that some Western news organizations have wrongly described the riots in Tibet as “peaceful protests” and that some photographs distorted the government’s actions in Tibet.

China’s state-controlled media, though, have only been allowed to publish favorable articles on the government’s role in Tibet. At the same time, some foreign journalists in China have complained about efforts to impede or disrupt their reporting, despite the government’s pledges of greater openness in the months leading up to the Olympics.

On Thursday, the Associated Press reported that after the protest by monks at the Lhasa temple, the area was sealed off. Journalists seeking to report independently, away from government guides, were followed on foot and by car.

This entry was posted in RagBlog and tagged Human Rights, Media, Sports, The World. Bookmark the permalink.