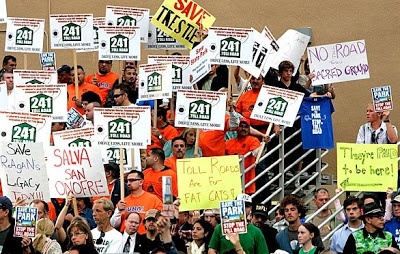 Toll road protest in California earlier this year.
‘Ordinary people will look back on this era, shake their heads in wonder and ask: how on earth did anyone ever think toll roads were sexy?’
By Roger Baker / The Rag Blog / August 28, 2008

The latest news regarding toll roads, their current status, their long range prospects, and more, below:

There will come a time in the not-too-distant future when ordinary people will look back on this era, shake their heads in wonder and ask: how on earth did anyone ever think toll roads were sexy.

From the tulip bubble in Holland in the 1630s through to the dotcom boom of the late 1990s, otherwise rational minds have discarded logic and joined the frenzied mob in whatever investment fad promises fabulous wealth.

Without fail, they always end in tears. And so it is with the infrastructure boom.

Yesterday, Macquarie Group found itself under concerted attack from hedge funds as its shares fell 10 per cent to $41.61.

But why? There is a key central, big-picture flaw in the management of not only the US economy, but also the whole global economy:

It all boils down to the fact that the capitalist system is based on paying interest on borrowed funds. However, a finite planet can only be milked so far before the rate of exploitation has to slow down. Nobody has put this better than Kenneth Boulding:

“Anyone who believes exponential growth can go on forever in a finite world is either a madman or an economist.”

In our times the key growth limiting factors is oil/fossil fuel (and soon enough fresh water and greenhouse gases, assuming there were a viable substitute for cheap oil to move people and goods in the global economy).

Meanwhile the health of the global capitalist economy demands that existing debts be repaid with interest, even though the production of material goods must eventually fall short of expectations. So quite naturally, the bankers persuade the governments to print up enough currency to paper over the temporary shortfall until the economy can recover and the current crisis is replaced by the anticipated recovery.

One can see where this leads. When Mother Nature finally gets too exhausted to keep expanding her physical blessings for human benefit at a rate that matches the rate of interest demanded for the normal functioning of the banking system and the capitalist business cycle, then invested savings will necessarily shrink over time, rather than rewarding the saver.

Economists are trained to be blind to the big picture, and the ultimately devastating implications of exponential growth over the long run.

Not only that, but our infrastructure is crumbling terribly nationwide, including the electrical transmission grid. The corporate empire that rules our lives has had the social character and planning perspective of an impetuous infant.

Toll roads have the short-sighted advantages over other critically needed, wise infrastructure investments by their subsidizing an established lobby centered on the road contractors, plus the suburban sprawl interests centered on the bankers, developers and land speculators. Factor in dysfunctional, special interest-based politics and it is easy to see that building new toll roads will win out over maintaining the crumbling existing infrastructure any day of the week, to say nothing of shifting our funds toward a new and more sustainable planning perspective, which by definition lacks a special interest lobby.

“…The American Society of Civil Engineers estimates that the United States needs to invest at least $1.6 trillion over the next five years to maintain and expand its infrastructure…”

That is on the order of $1000 per years per capita in a population already tens of thousands in personal debt due to credit cards, home mortgages etc., while living under a government busy bailing out banks on an emergency basis while simultaneously fighting apparently endless foreign wars involving oil or something.

As we used to say, it don’t take a weatherman to know which way the wind blows.

Here is the most important recent news, documenting a sharp decline in toll road use due to soaring fuel price and the downgrading of toll road bonds by Fitch, etc:

…Traffic on tax roads in the US seems to have dropped on average by 4 to 5% and on toll roads by 5 to 6% over the past year. The reduced travel is attributable almost entirely to the big run-up in gasoline prices and is about was to be expected from long-established economists’ estimates of the price elasticity of demand of about -0.2. Fuel prices which dominate the marginal cost of driving are about 30% higher so you would expect traffic as measured by vehicle-miles traveled (VMT) to be 6% lower (-0.2×0.30=-0.06). Deduct one percent for the sluggish economy and you have 5%. Toll road traffic may be down marginally more than tax roads traffic because tollroads are somewhat skewed to discretionary travel…

Meanwhile, as I have recently pointed out, our three top Texas politicians (Perry, Craddick and Dewhurst) have made it clear that they would like to use state retirement funds under their control to keep building the toll roads when Wall Street is afraid to issue such debt because of the obvious risk to lenders in light of the information above. Such a policy is both a tribute to the political clout of the Texas road lobby (allied with the banks that have funded land speculation in raw land surrounding the major Texas urban areas), and also a revealing commentary on the moral character of our state political leaders. Here is the link:

Finally, to explain and to document the unwillingness of traditional bond lenders to fund bond projects of any sort, even of a kind much less speculative than toll roads, here are two links that explain the current situation quite adequately:

From the foregoing it is quite apparent why the road lobby is forced to turn to Texas politicians and the pension funds under their control as a last resort. Here the only risk is that Texas schoolteachers might get wind of the plan, might be smarter and more motivated than anticipated, and might be able to organize politically during the next legislative session in time to stop them. Any state bonds are nearly certain to fail because of the combined effect of the abysmal credit conditions described above and peak oil. For those who wish to document the peak oil risk in a scholarly way, here are three key links:

Crude Oil Price Retreat: Sunrise or a Lull Before the Storm? by by James Leigh / Energy Bulletin / August 12, 2008

1 Response to Toll Roads : Soon to be Yesterday’s News?