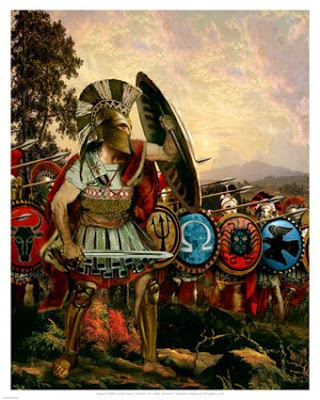 ATHENS — As Barack Obama swept Europe politically this week, my vantage point was the ancient Agora of Athens, where I could muse whether the young conquerer might become more Athenian or Spartan.

Athens today still evokes a powerful historical parallel with the present American experience. Here, more than 2,000 years ago, an open participatory democracy was born, with lasting artistic, scientific and philosophic achievements, but in tandem with a system of slave labor. Obama strides the same historical contradiction.

The city-state of Sparta, on the other hand, birthed today’s military ideal, turning young boys into warrior-patriots, becoming the vanguard of “the 300” against the Persian advance at Thermopolae, but eventually succumbing to decay as their hyper-militarism led to over-extension.

The parallels between the Athenian Obama and the Spartan John McCain [and his neo-conservative allies] seem obvious.

After George Bush and the Iraq War, the vast majority of Greeks and Europeans long for the restoration of democratic, free-thinking Athens – with the Harvard scholar Obama symbolizing the overcoming the legacy of a slave-state underclass. Instead of Spartan militarism, and its echoes in Pax Romana, Nicolo Machiavelli, or Pax Americana, the dream here is of a Pax Humana led by Barack Obama. The “new Athenian” will have to negotiate with the modern Persians, not fight them at a modern Thermopolae.

The Republican incarnation of the Spartans is seen here as an insanely-dangerous neo-conservative faction attempting to hold off the terrorist throngs at a new Thermopolae, somewhere near the Khyber Pass. Sparta’s vanguard units in those times were known as the Crypteria, which roughly translates as “special ops brigade.” The hard lessons learned at Thermopolae, however, have been ignored by neo-conservative discourse, including the recent Hollywood film glorifying Sparta’s 300.

The Greek worldview is helpful here, in permitting a distinction between the Mythic Obama and the Literal Obama. The rapture in Europe is for the mythic Obama, whose candidacy suggests a possible transcendence of the world’s woes over racism and immigration. But support for Obama’s insistence that Europe join America in sending thousands of troops to Afghanistan, in a new, aggressive combat mission, meets with heavy resistance even among hard-core Obama supporters.

“The bottom line is an abhorrence with Bush”, says Spyros Draenos, a Greek researcher writing a history of the 1960s’ Greek reformer, Andreas Papandreou, overthrown and imprisoned with the cooperation of the American CIA. Draenos’ familiarity with the sadness of modern history places him as an interested, but by no means passionate, supporter of the Illinois senator who was two years old when the Greek generals jailed Papandreou and installed a dictatorship in 1967.

“But that leaves open the question of why the fascination with Obama”, Draenos admits. “We are in awe of the fact that a black could be elected president of the US, because America is so associated with racism. Yet underneath the deep anti-US sentiment here is a desire to believe. Back in the Sixties it was the same, it was the rise of a movement among those who were disillusioned pro-Americans.”

Obama is likely to be mistaken in his stated belief that his popularity in Europe will translate into support for more combat troops in Afganistan. Here the Mythic Obama faces the real world. There is little European desire to shed blood in Afghanistan or Pakistan, not even among the British who carved the two countries into existence. Those are seen as reputational interests of the American superpower, not global interests in securing peace. ***The literal Obama would have fared better in Europe if he had acknowledged America’s stakes in Pakistan’s garment sweatshops, which receive privileged trade status, or America’s tolerance of Afghanistan’s monopoly on opium.***

Dreanos notes his “amazement that young people here are actually following Obama when he makes compromises, and asking the same questions” as the older, more critical generation. “There is an underlying cynicism” that Obama has not yet addressed, “about America playing a different role in the world” from the Middle East to Afghanistan. “The Greeks are fatalistic about getting ***f-d over”*** by a varied series of masters, he bluntly says. They are not likely to understand the imperial goal of dying in Afghanistan. They think they have been here before, for centuries.

As Obama made his near-perfect pitch, for example, a top US official was confirming European skepticism by writing in the New York Times that Afghanistan is a “virtual narco-state” with collusion at “the top of government” and complete indifference from the Pentagon. [NYT, Global, July 25, 2008]. From any perspective, Obama’s proposal is to join a coalition in quagmire, a token form of Spartan resolve, designed to protect him through the next American election.

Obama also is asking NATO to sign up for combat, not peacekeeping, in the global war on terrorism [GWOT, in original Pentagon terminology], a haunting reminder of Greece’s experience with the first CIA subversion of a European government under the cover of the fledgling NATO.

In brief, Communist-led nationalist forces would have defeated the Nazis and taken power in 1944 were it not for British military intervention, a task soon handed off to the Americans. It is not clear what an anti-Nazi victory of the Left would have meant for Greece, but it is known that the Soviet Union left the Greek partisans on their own. As a result, a radical and turbulent Greece came under NATO control, with a royalist government that included an army, police and civil service purged of anyone suspected of anti-monarchist or left-wing sympathies.

In the Cold War dichotomy, neutralism was unacceptable to the Americans, a policy that foreshadowed the Bush/GWOT era’s pronouncements that governments and parties were “either for us or against us.” But the Greek passions for national sovereignty and social justice gave rise to a Center-Left resistance led by George Papandreaou and his son, the American-educated economist Andreas [and his Chicago-born wife Margaret] in the early Sixties. Following the US-supported overthrow of the democratically-elected governments of Iran, Guatemala and Brazil, the “colonels’ coup” in Greece was a preview of the violent overthrow of the Chilean government in 1973. In those years, right-wing generals seemed to be the solution to the rise of neutralism and non-alignment. The hubris was astounding, as recently-declassified CIA and State Department documents, never before reported in America’s mainstream media, reveal:

According to a CIA cable of January 21, 1965, retrieved from the Lyndon Baines Johnson Library, “the [Greek] king believes that the [Papandreaou] government’s move to the left and the apparent rise of leftist activity are dangerous developments and that preventive action should begin now.” And further: “the king wants Papandreou’s image destroyed…but he does not want to become involved or blamed if the attacks fail.” Another document, dated September 5, 1965, stated that the American “embassy has concluded George Papandreou’s return to power should be avoided if this can be done without a direct and open confrontation with him.”

A memo drafted by the CIA station chief in Athens concluded that “the anti-monarchists [led by Papandreou] would draw some 70 to 80 percent of the vote.” The CIA reported favorably on articles by the New York Time’s C.L. Sulzberger “highly critical of Andreas Papandreou and his father [as] a fair reflection of the U.S. [government view and were probably inspired by U.S. officials. [NYT, July 28, Aug. 4,5,6,1965]

Andreas Papandreou was an unlikely reformer or revolutionary, but a Greek patriot who sought alternatives to the Cold War divisions. Chairman of the economics faculty at UC Berkeley, he blended Greek destiny with the Sixties’s zeitgeist.

He was closely aligned with the Galbraithean wing of the Kennedy administration, and ***later*** with more progressive economists like Stanley Sheinbaum, then extricating himself from a CIA-funded Vietnam police training program at Michigan State University.

Like Obama, Andreas Papandreou developed what he called a “mystagogical” relationship with his fervent audiences at mass rallies in Greece. Despite a 53 percent electoral mandate for his father’s Center Union coalition, its ascendance was destabilized, thwarted and ultimately overthrown by a Greek junta with CIA support in 1967***. Andreas Papandreau’s life was saved by the passionate intervention by Americans like Sheinbaum. President Johnson told Arthur Schlesinger at the time that he ordered that the Greeks “not kill that son of a bitch”, according to later interviews and documents.

After being released from prison, Andreas Papandreou came to power on a democratic electoral tide in the 1980s. Ten years earlier he had written a prophetic book, Democracy at Gunpoint: The Greek Front, which contains a compelling challenge to today’s humanitarian hawks gathering around the Obama candidacy.

Caught between two powers [then the Cold War, now the Global War on Terrorism], Papandreou wrote that “democracy is indeed at the gunpoint; and the sooner that the democratic, progressive forces of the world perceive that situation, the greater is the chance that the trigger will not be pulled.”

I visited Papandreou’s widow, the American-born former first lady of Greece, at her shoreline home in Corinth as Obama passed through Europe last week. Now 85, Margaret Papandreou remains a charismatic proponent of human rights, particularly women’s rights, on a global basis. She finds Obama, a resident of her native city of Chicago, a fascinating new force in global politics. But aware of the haunted chapters of the Papandreou’s progressive legacy, she wonders aloud if Obama can achieve his idealistic origins, become more Athenian than Spartan.

Wishing him well and not waiting for a Delphic oracle, she already is planning conferences on how to organize community leadership for the next generation. She hopes to contact the Obama organizers for their advice.