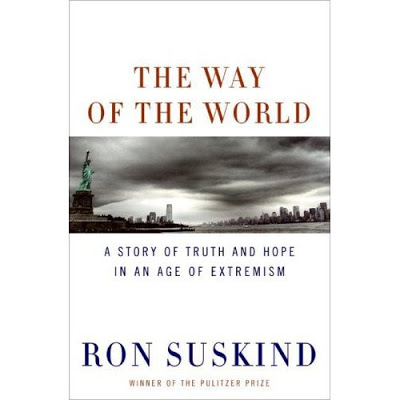 ‘Designed to portray a false link between Hussein’s regime and al Qaeda’
By Mike Allen / August 4, 2008

A new book by the author Ron Suskind claims that the White House ordered the CIA to forge a back-dated, handwritten letter from the head of Iraqi intelligence to Saddam Hussein.

Suskind writes in “The Way of the World,” to be published Tuesday, that the alleged forgery – adamantly denied by the White House – was designed to portray a false link between Hussein’s regime and al Qaeda as a justification for the Iraq war.

The author also claims that the Bush administration had information from a top Iraqi intelligence official “that there were no weapons of mass destruction in Iraq – intelligence they received in plenty of time to stop an invasion.”

The letter’s existence has been reported before, and it had been written about as if it were genuine. It was passed in Baghdad to a reporter for The (London) Sunday Telegraph who wrote about it on the front page of Dec. 14, 2003, under the headline, “Terrorist behind September 11 strike ‘was trained by Saddam.’”

The Telegraph story by Con Coughlin (which, coincidentally, ran the day Hussein was captured in his “spider hole”) was touted in the U.S. media by supporters of the war, and he was interviewed on NBC’s “Meet the Press.”

“Over the next few days, the Habbush letter continued to be featured prominently in the United States and across the globe,” Suskind writes. “Fox’s Bill O’Reilly trumpeted the story Sunday night on ‘The O’Reilly Factor,’ talking breathlessly about details of the story and exhorting, ‘Now, if this is true, that blows the lid off al Qaeda—Saddam.'”

According to Suskind, the administration had been in contact with the director of the Iraqi intelligence service in the last years of Hussein’s regime, Tahir Jalil Habbush al-Tikriti.

“The White House had concocted a fake letter from Habbush to Saddam, backdated to July 1, 2001,” Suskind writes. “It said that 9/11 ringleader Mohammad Atta had actually trained for his mission in Iraq – thus showing, finally, that there was an operational link between Saddam and al Qaeda, something the Vice President’s Office had been pressing CIA to prove since 9/11 as a justification to invade Iraq. There is no link.”

The White House plans to push back hard. Fratto added: “Ron Suskind makes a living from gutter journalism. He is about selling books and making wild allegations that no one can verify, including the numerous bipartisan commissions that have reported on pre-war intelligence.”

Before “The Way of the World: A Story of Truth and Hope in an Age of Extremism,” Suskind wrote two New York Times bestsellers critical of the Bush administration – “The Price of Loyalty” (2004), which featured extensive comments by former Treasury Secretary Paul O’Neill, and “The One Percent Doctrine” (2006).

Suskind writes in his new book that the order to create the letter was written on “creamy White House stationery.” The book suggests that the letter was subsequently created by the CIA and delivered to Iraq, but does not say how.

The author claims that such an operation, part of “false pretenses” for war, would apparently constitute illegal White House use of the CIA to influence a domestic audience, an arguably impeachable offense.

Suskind writes that the White House had “ignored the Iraq intelligence chief’s accurate disclosure that there were no weapons of mass destruction in Iraq – intelligence they received in plenty of time to stop an invasion.

“They secretly resettled him in Jordan, paid him $5 million – which one could argue was hush money – and then used his captive status to help deceive the world about one of the era’s most crushing truths: that America had gone to war under false pretenses,” the book says.

Suskind writes that the forgery “operation created by the White House and passed to the CIA seems inconsistent with” a statute saying the CIA may not conduct covert operations “intended to influence United States political processes, public opinion, policies or media.”

“It is not the sort of offense, such as assault or burglary, that carries specific penalties, for example, a fine or jail time,” Suskind writes. “It is much broader than that. It pertains to the White House’s knowingly misusing an arm of government, the sort of thing generally taken up in impeachment proceedings.”

Habbush is still listed as wanted on a State Department website designed to help combat international terrorism, with the notation: “Up to $1 Million Reward.”

Suskind is scheduled to discuss the book’s findings – and his assertion that the country has “diminished moral authority” — in a pair of interviews by NBC’s Meredith Vieira on the “Today” show at 7:10 p.m. Eastern on Tuesday and Wednesday.

“[B]y placing so much on its secret ledger,” Suskind writes in his final chapter, “the administration profoundly altered basic democratic ideals of accountability and informed consent.”

The book (HarperCollins, $27.95) was not supposed to be publicly available until Tuesday, but Politico purchased a copy Monday night at a Washington bookstore.

Suskind, an engaging and confident Washingtonian, writes that the book was “one tough project.” He won the Pulitzer Prize for feature writing as a reporter for The Wall Street Journal, where he worked from 1993 to 2000.

The White House said Suskind received no formal cooperation. He writes in the acknowledgments section at the end of the book: “It should be noted that the intelligence sources who are quoted in this book in no way disclosed any classified information. None crossed the line.”

Among the 415-page book’s other highlights:

* John Maguire, one of two men who oversaw the CIA’s Iraq Operations Group, was frustrated by what Suskind describes as the “tendency of the White House to ignore advice it didn’t want to hear – advice that contradicted its willed certainty, political judgments, or rigid message strategies.”

And Suskind writes that the administration “did not want to hear the word insurgency.”

* In the first days of his presidency, Bush rejected advice from the CIA to wiretap Russian President Vladimir Putin in February 2001 in Vienna, where he was staying in a hotel where the CIA had a listening device planted in the wall of the presidential suite, in need only of a battery change. The CIA said that if the surveillance were discovered, Putin’s respect for Bush would be heightened.

But Condoleezza Rice, Bush’s national security adviser, advised that it was “too risky, it might be discovered,” Suskind writes. Bush decided against if as “a gut decision” based on what he thought was a friendship based on several conversations, including during the presidential campaign. The CIA had warned him that Putin “was a trained KGB agent … [who] wants you to think he’s your friend.”

* Suskind reports that Bush initially told Cheney he had to “‘step back’ in large meetings when they were together, like those at the NSC [National Security Council], because people were addressing and deferring to Cheney. Cheney said he understood, that he’d mostly just take notes at the big tables and then he and Bush would meet privately, frequently, to discuss options and action.”

* Suskind contends Cheney established “deniability” for Bush as part of the vice president’s “complex strategies, developed over decades, for how to protect a president.”

“After the searing experience of being in the Nixon White House, Cheney developed a view that the failure of Watergate was not the break-in, or even the cover-up, but the way the president had, in essence, been over-briefed. There were certain things a president shouldn’t know – things that could be illegal, disruptive to key foreign relationships, or humiliating to the executive.

“They key was a signaling system, where the president made his wishes broadly known to a sufficiently powerful deputy who could take it from there. If an investigation ensued, or a foreign leader cried foul, the president could shrug. This was never something he’d authorized. The whole point of Cheney’s model is to make a president less accountable for his action. Cheney’s view is that accountability – a bedrock feature of representative democracy – is not, in every case, a virtue.”

* Suskind is acidly derisive of Bush, saying that he initially lost his “nerve” on 9/11, regaining it when he grabbed the Ground Zero bullhorn. Suskind says Bush’s 9 p.m. Oval Office address on the fifth anniversary was “well along in petulance, seasoned by a touch of self-defensiveness.”

“Moving on its own natural arc, the country is in the process of leaving Bush – his bullying impulse fused, permanently, with satisfying vengeance – in the scattering ashes of 9/11,” Suskind writes. “The high purpose his angry words carried after the attacks, and in two elections since, is dissolving with each passing minute.”

* Suskind writes in the acknowledgments that his research assistant, Greg Jackson, “was sent to New York on a project for the book” in September 2007 and was “detained by federal agents in Manhattan. He was interrogated and his notes were confiscated, violations of his First and Fourth Amendment rights.” The author provides no further detail.

Find The Way of the World at Amazon.com