Tom Hayden :
Who is creating a terrorist threat?

The imminent danger is that Obama is preparing to go to war not to ‘save Baghdad’ but to attack the perceived threat of a Sunni jihadist ‘sanctuary.’ 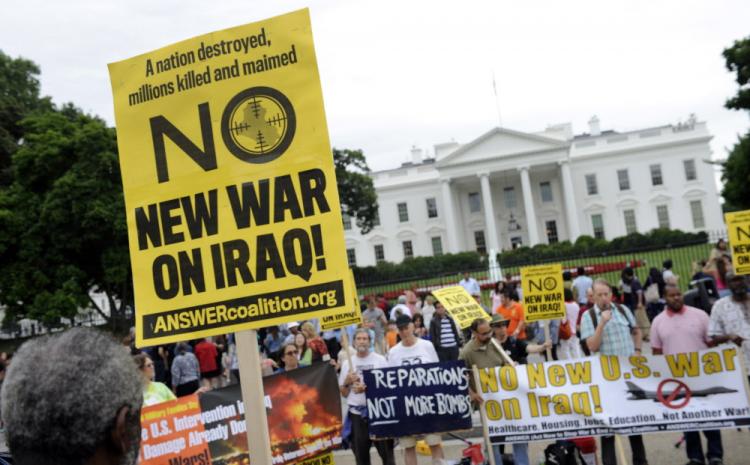 Demonstration Saturday, June 21, outside the White House. Photo from AP.

Contrary to the original spin, there seems to be no need or rationale for “saving” Baghdad from invading ISIS hordes. As I predicted, the growing Shiite counteroffensive seems to be a sufficient deterrent. It appears that al-Maliki will be forced out politically, perhaps to be replaced by a new Humpty-Dumpty and a patchwork agreement to “reform” the Shiite regime.

The imminent danger is that Obama is preparing to go to war not to “save Baghdad” but to attack the perceived threat of a Sunni jihadist “sanctuary” in the vast zone from southern Syria into northern Iraq. It has been U.S. policy, however, that is partly responsible for fostering the terrorist sanctuary threat, if one actually transpires.

The U.S. made an alliance in 2006-‘7 with the very Sunni tribes in Iraq (remember “the Awakening”?) which it now considers part of the terrorist insurgency. Similarly, by tacitly supporting the Shiite-related Assad regime in Syria, the U.S. has antagonized Syria’s Sunnis and contributed to the conditions which have given rise to the extremist ISIS faction.

If Obama goes to war on the “Yemen model,” he will be allied with Iran at least on a de facto basis. Whether it’s admitted or not, such an informal alliance surely will affect the U.S.-Iran nuclear talks as they enter a crucial stage. Russia has signaled its full backing of the al-Maliki regime as well, once again aligning Russia with Iran.

In the end, American public opinion will be the center of gravity.

In the end, American public opinion will be the center of gravity. Obama has ended the ground wars while embracing the drone wars as a weak alternative. Obama knows that drones are no “solution” to anything, but they are inexpensive compared to ground troops, and avoid American casualties — at least so far. But there is rising criticism of the drones policy from Left and Right.

Obama so far is blocked by the Right, including the Israel and fossil fuel lobbies, from the real pivot America needs to make: ending our unholy alliances with Arab dictators of all kinds, ending military occupations of Arab countries whether by drones or troops on the ground, moving to United Nations recognition of a Palestinian state, and investing in a crash program against climate change through conservation and renewable resources. We need to take up these options before they become more expensive necessities.

The Long War alternative needs the full attention of Congress, the media, and the American people. It is a failure: a policy reliant mainly on counterterrorism only breeds more terrorist threats. It is unaffordable: if Iraq will cost $6 trillion, the Long War will be far greater. It is undemocratic: there is no way to authorize a war projected to last 50 to 80 years, through 20 presidential terms and 40 congressional budget cycles, without democracy being undermined.

Barbara Lee should be supported in her long struggle to end the Authorization for the Use of Military Force [AUMF] which launched the open-ended Global War on Terrorism. What the public doesn’t know is that Iraq and Afghanistan are defined as “small wars” amidst the “big one” by the theorist David Kilcullen, chief counterinsurgency adviser to Gen. Petraeus in Iraq. By that measure, we are only in the 12th year of a slog expected to last another 60 or 70 years.