Top Ten Lies About Iran and Its ‘Nuclear Program’ 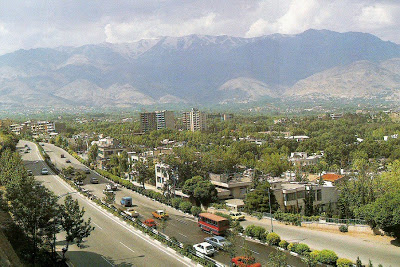 Looks like Vancouver or maybe the Seattle area, but this is actually Tehran. Looks the same as your home town, doesn’t it?
Top Things You Think You Know About Iran That Are Not True
By Juan Cole / October 1, 2009

Thursday is a fateful day for the world, as the US, other members of the United Nations Security Council, and Germany meet in Geneva with Iran in a bid to resolve outstanding issues. Although Iranian president Mahmoud Ahmadinejad had earlier attempted to put the nuclear issue off the bargaining table, this rhetorical flourish was a mere opening gambit and nuclear issues will certainly dominate the talks. As Henry Kissinger pointed out, these talks are just beginning and there are highly unlikely to be any breakthroughs for a very long time. Diplomacy is a marathon, not a sprint.

But on this occasion, I thought I’d take the opportunity to list some things that people tend to think they know about Iran, but for which the evidence is shaky.

Belief: Iran is aggressive and has threatened to attack Israel, its neighbors or the US.

Reality: Iran has not launched an aggressive war in modern history (unlike the US or Israel), and its leaders have a doctrine of “no first strike.” This is true of Supreme Leader Ali Khamenei, as well as of Revolutionary Guards commanders.

Belief: Iran is a militarized society bristling with dangerous weapons and a growing threat to world peace.

Reality: Iran’s military budget is a little over $6 billion annually. Sweden, Singapore and Greece all have larger military budgets. Moreover, Iran is a country of 70 million, so that its per capita spending on defense is tiny compared to these others, since they are much smaller countries with regard to population. Iran spends less per capita on its military than any other country in the Persian Gulf region with the exception of the United Arab Emirates.

Belief: Iran has threatened to attack Israel militarily and to “wipe it off the map.”

Reality: No Iranian leader in the executive has threatened an aggressive act of war on Israel, since this would contradict the doctrine of ‘no first strike’ to which the country has adhered. The Iranian president has explicitly said that Iran is not a threat to any country, including Israel.

Belief: But didn’t President Mahmoud Ahmadinejad threaten to ‘wipe Israel off the map?’

Reality: President Mahmoud Ahmadinejad did quote Ayatollah Khomeini to the effect that “this Occupation regime over Jerusalem must vanish from the page of time” (in rezhim-e eshghalgar-i Qods bayad as safheh-e ruzgar mahv shavad). This was not a pledge to roll tanks and invade or to launch missiles, however. It is the expression of a hope that the regime will collapse, just as the Soviet Union did. It is not a threat to kill anyone at all.

Actuality: Some are, some aren’t. Former president Mohammad Khatami has castigated Ahmadinejad for questioning the full extent of the Holocaust, which he called “the crime of Nazism.” Many educated Iranians in the regime are perfectly aware of the horrors of the Holocaust. In any case, despite what propagandists imply, neither Holocaust denial (as wicked as that is) nor calling Israel names is the same thing as pledging to attack it militarily.

Belief: Iran is like North Korea in having an active nuclear weapons program, and is the same sort of threat to the world.

Actuality: Iran has a nuclear enrichment site at Natanz near Isfahan where it says it is trying to produce fuel for future civilian nuclear reactors to generate electricity. All Iranian leaders deny that this site is for weapons production, and the International Atomic Energy Agency has repeatedly inspected it and found no weapons program. Iran is not being completely transparent, generating some doubts, but all the evidence the IAEA and the CIA can gather points to there not being a weapons program. The 2007 National Intelligence Estimate by 16 US intelligence agencies, including the CIA and the Defense Intelligence Agency, assessed with fair confidence that Iran has no nuclear weapons research program. This assessment was based on debriefings of defecting nuclear scientists, as well as on the documents they brought out, in addition to US signals intelligence from Iran. While Germany, Israel and recently the UK intelligence is more suspicious of Iranian intentions, all of them were badly wrong about Iraq’s alleged Weapons of Mass Destruction and Germany in particular was taken in by Curveball, a drunk Iraqi braggart.

Belief: The West recently discovered a secret Iranian nuclear weapons plant in a mountain near Qom.

Actuality: Iran announced Monday a week ago to the International Atomic Energy Agency that it had begun work on a second, civilian nuclear enrichment facility near Qom. There are no nuclear materials at the site and it has not gone hot, so technically Iran is not in violation of the Nuclear Non-Proliferation Treaty, though it did break its word to the IAEA that it would immediately inform the UN of any work on a new facility. Iran has pledged to allow the site to be inspected regularly by the IAEA, and if it honors the pledge, as it largely has at the Natanz plant, then Iran cannot produce nuclear weapons at the site, since that would be detected by the inspectors. Secretary of State Hillary Clinton admitted on Sunday that Iran could not produce nuclear weapons at Natanz precisely because it is being inspected. Yet American hawks have repeatedly demanded a strike on Natanz.

Belief: The world should sanction Iran not only because of its nuclear enrichment research program but also because the current regime stole June’s presidential election and brutally repressed the subsequent demonstrations.

Actuality: Iran’s reform movement is dead set against increased sanctions on Iran, which likely would not affect the regime, and would harm ordinary Iranians.

Belief: Isn’t the Iranian regime irrational and crazed, so that a doctrine of mutually assured destruction just would not work with them?

Actuality: Iranian politicians are rational actors. If they were madmen, why haven’t they invaded any of their neighbors? Saddam Hussein of Iraq invaded both Iran and Kuwait. Israel invaded its neighbors more than once. In contrast, Iran has not started any wars. Demonizing people by calling them unbalanced is an old propaganda trick. The US elite was once unalterably opposed to China having nuclear science because they believed the Chinese are intrinsically irrational. This kind of talk is a form of racism.

Belief: The international community would not have put sanctions on Iran, and would not be so worried, if it were not a gathering nuclear threat.

Actuality: The centrifuge technology that Iran is using to enrich uranium is open-ended. In the old days, you could tell which countries might want a nuclear bomb by whether they were building light water reactors (unsuitable for bomb-making) or heavy-water reactors (could be used to make a bomb). But with centrifuges, once you can enrich to 5% to fuel a civilian reactor, you could theoretically feed the material back through many times and enrich to 90% for a bomb. However, as long as centrifuge plants are being actively inspected, they cannot be used to make a bomb.

The two danger signals would be if Iran threw out the inspectors or if it found a way to create a secret facility. The latter task would be extremely difficult, however, as demonstrated by the CIA’s discovery of the Qom facility construction in 2006 from satellite photos. Nuclear installations, especially centrifuge ones, consume a great deal of water, construction materiel, and so forth, so that constructing one in secret is a tall order. In any case, you can’t attack and destroy a country because you have an intuition that they might be doing something illegal. You need some kind of proof. Moreover, Israel, Pakistan and India are all much worse citizens of the globe than Iran, since they refused to sign the NPT and then went for broke to get a bomb; and nothing at all has been done to any of them by the UNSC.

This entry was posted in RagBlog and tagged Iran, Middle East, World Opinion. Bookmark the permalink.