U.S. Schools : Segregation Worse Today Than in the 1950’s 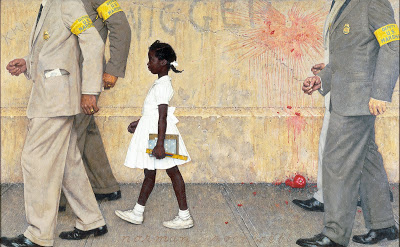 “The Problem We All Live With” by Norman Rockwell. Photo courtesy of the Detroit Institute of Arts.
U.S. schools are more segregated today than in the 1950s

In California and Texas segregation is spreading into large sections of suburbia as well. This is the social effect of years of neglect to civil rights policies that stressed equal educational opportunity for all.

[This story is Number 2 in Project Censored’s “Top 25 Censored Stories for 2010.” It is based on the study “Reviving the Goal of an Integrated Society: A 21st Century Challenge,” by Gary Orfield, the Civil Rights Project, UCLA, January 2009, with student researchers Melissa Robinson and Rena Hawkins and faculty evaluator Sangeeta Sinha, PhD, Southwest Minnesota State University.]

Schools in the United States are more segregated today than they have been in more than four decades. Millions of non-white students are locked into “dropout factory” high schools, where huge percentages do not graduate, and few are well prepared for college or a future in the US economy.

According to a new Civil Rights report published at the University of California, Los Angeles, schools in the U.S. are 44 percent non-white, and minorities are rapidly emerging as the majority of public school students in the U.S. Latinos and blacks, the two largest minority groups, attend schools more segregated today than during the civil rights movement forty years ago. In Latino and African American populations, two of every five students attend intensely segregated schools. For Latinos this increase in segregation reflects growing residential segregation.

For blacks a significant part of the reversal reflects the ending of desegregation plans in public schools throughout the nation. In the 1954 case Brown v. Board of Education, the U.S. Supreme Court concluded that the Southern standard of “separate but equal” was “inherently unequal,” and did “irreversible” harm to black students. It later extended that ruling to Latinos.

The Civil Rights Study shows that most severe segregation in public schools is in the Western states, including California — not in the South, as many people believe. Unequal education leads to diminished access to college and future jobs. Most non-white schools are segregated by poverty as well as race. Most of the nation’s dropouts occur in non-white public schools, leading to large numbers of virtually unemployable young people of color.

Low-income campuses are more likely to be ignored by college and job market recruiters. The impact of funding cuts in welfare and social programs since the 1990s was partially masked by the economic boom that suddenly ended in the fall of 2008. As a consequence, conditions are likely to get even worse in the immediate future.

In California and Texas segregation is spreading into large sections of suburbia as well. This is the social effect of years of neglect to civil rights policies that stressed equal educational opportunity for all. In California, the nation’s most multiracial state, half of blacks and Asians attend segregated schools, as do one quarter of Latino and Native American students.

While many cities came under desegregation court orders during the civil rights era, most suburbs, because they had few minority students at that time, did not. When minority families began to move to the suburbs in large numbers, there was no plan in place to attain or maintain desegregation, appropriately train teachers and staff, or recruit non-white teachers to help deal with new groups of students. Eighty-five percent of the nation’s teachers are white, and little progress is being made toward diversifying the nation’s teaching force.

In states that now have a substantial majority of non-white students, failure to provide quality education to that majority through high school and college is a direct threat to the economic and social future of the general population. In a world economy, success is linked to formal education. Major sections of the US face the threat of declining education levels as the proportion of children attending inferior segregated schools continues to increase.

Rural schools also face severe segregation. In the days of civil rights struggles, small towns and rural areas were seen as the heart of the most intense racism. Of 8.3 million rural white students, 73 percent attend schools that are 80 to100 percent white.

Our nation’s segregated schools result from decades of systematic neglect of civil rights policy and related educational and community reforms.

According to the UCLA report, what is needed are leaders who recognize that we have a common destiny in an America where our children grow up together, knowing and respecting each other, and are all given the educational tools that prepare them for success in our society. The author maintains that if we are to continue along a path of deepening separation and entrenched inequality it will only diminish our common potential.

3 Responses to U.S. Schools : Segregation Worse Today Than in the 1950’s