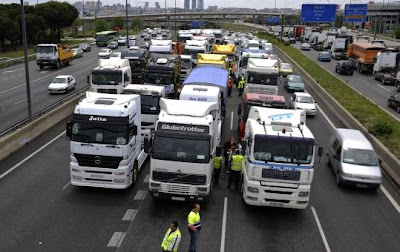 Truck drivers parked on a highway leading out of Madrid yesterday, one of a number of roads they blocked. Other roads included some leading into the center of Barcelona and the border with France. Photo by Denis Doyle/Getty Images.
Two truck drivers die as fuel protests spread across Europe
June 10, 2008

MADRID — Two lorry drivers were killed on picket lines in Spain and Portugal on Tuesday as strikes by thousands of truckers over soaring fuel prices turned deadly.

Spanish police escorted petrol supply tankers into Barcelona on the second day of the stoppage that has caused food and fuel shortages and huge tailbacks on the Spanish-French border.

A Portuguese driver was killed after he was hit by a truck as he manned a barricade filtering traffic near Alcanena, north of Lisbon.

A police spokesman quoted witnesses as saying the 52-year-old man climbed onto the side of a truck in a bid to stop it and fell off under the wheels, Lusa news agency reported.

Later Tuesday, a truck driver in Spain was run over and killed by a van as he manned a picket line outside a wholesale market in the southern city of Granada, police said.

Other trucks in Portugal and Spain have been stoned or had their windows smashed and tyres punctured for working during the national strikes.

A total of 15 people, most of them manning picket lines, were arrested in Spain Tuesday for disturbing public order, assault or threats, Spanish media said.

Tens of thousands of truckers are on strike or joining the protests to demand government help to offset the higher fuel costs.

Authorities in northern Spain ordered emergency measures after many petrol stations in the Catalonia region ran out of fuel.

“Twenty tanker trucks escorted by the regional police left an industrial zone this morning for Barcelona port to help supply and distribute to petrol stations in the region,” a regional police spokesman told AFP.

Forty percent of petrol stations in Catalonia have run out of fuel, according to Manuel Amado, president of the Catalonia Federation of Service Stations.

Arrivals of fresh meat, fish and fruit in Madrid have come to a near halt, according to officials at the Mercamadrid market, Spain’s biggest wholesale market. They said that fish would be in short supply from Thursday but stocks of other foods should last until the end of the week.

Automakers in Spain said most of the country’s automobile plants, including those of Nissan, Mercedes Benz, Seat and Renault, have had to cut or halt production.

Auto plants are particularly vulnerable to a strike by hauliers, which provide them with spare parts.

Spanish and French truckers staged pickets on either side of the frontier between the two countries. They blocked a bridge on the border at Bidassoa in the western Basque region and other main crossing points.

On the French side, service areas on motorways were packed with trucks from the border right back to Bordeaux, about 200 kilometres (125 miles) away.

Talks Monday between the hauliers and the government ended in failure, Fenadismer said.

The Portuguese government said it hoped to have an agreement with its truckers by the end of the week.

About half of intercity and local commuter trains were running along with about three quarters of TGV high speed trains from Paris to southwest France. Some express commuter lines into Paris were badly affected by the strike.

Spanish fisherman were keeping up their strike against fuel prices but most French trawlers have decided to go back to work after several weeks of blocking ports and access to oil refineries. 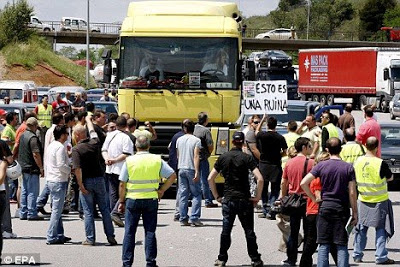