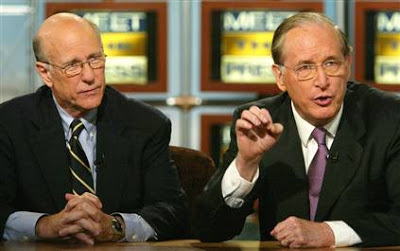 The Senate Intelligence Committee, which released the Iraq report, is chaired by Sen. Pat Roberts, R-Kan., left. The ranking minority member is Sen. Jay Rockefeller, right. Photo by Alex Wong / Getty Images.
The Big Story You May Have Missed During the Obama v. Clinton Finale
By Arianna Huffington / June 9, 2008

For those of you who were understandably busy following the last round of the Democratic Nomination Ultimate Fighting Championship this past week (I won’t give away the ending for those who have it TiVo’d), I’d like to call your attention to a major story you may have missed: the Senate Intelligence Committee’s 200-page “Phase II” report on how the Bush administration used — and abused — pre-war intelligence in the run-up to the war in Iraq.

The Committee’s conclusion: the president and his top officials deliberately misrepresented secret intelligence to make the case to invade Iraq. No surprise there.

But it’s vitally important that we continue to reiterate and document the truth of what happened and who was responsible for perpetrating this fraud on the American public. And here’s why: the war is still going on (and American soldiers continue to die as a result of the deception); the same people responsible for this debacle still have their hands on the wheel; desperate to cover their tracks, they continue to lie about how we got into this mess; and they are currently hitting all the same notes in agitating for war in Iran.

The report is a direct rebuke to the administration’s continued claims that it was the intelligence that was faulty, and that Bush and co. were simply presenting what the C.I.A. had given them.

The report doesn’t use the word, but we all know what it’s called when someone presents something as fact that’s directly contradicted by the evidence. A lie. Not a mistake. A lie.

Some specifics from Rockefeller’s statement (emphasis mine):

Statements and implications by the President and Secretary of State suggesting that Iraq and al-Qa’ida had a partnership, or that Iraq had provided al-Qa’ida with weapons training, were not substantiated by the intelligence.

*Statements by the President and the Vice President indicating that Saddam Hussein was prepared to give weapons of mass destruction to terrorist groups for attacks against the United States were contradicted by available intelligence information.

*Statements by President Bush and Vice President Cheney regarding the postwar situation in Iraq, in terms of the political, security, and economic, did not reflect the concerns and uncertainties expressed in the intelligence products.

*Statements by the President and Vice President prior to the October 2002 National Intelligence Estimate regarding Iraq’s chemical weapons production capability and activities did not reflect the intelligence community’s uncertainties as to whether such production was ongoing.

*The Secretary of Defense’s statement that the Iraqi government operated underground WMD facilities that were not vulnerable to conventional airstrikes because they were underground and deeply buried was not substantiated by available intelligence information.

*The Intelligence Community did not confirm that Muhammad Atta met an Iraqi intelligence officer in Prague in 2001 as the Vice President repeatedly claimed.
So much for the tired claim that “everybody in the world” agreed that Iraq had WMD, was a “grave and gathering threat,” was in league with Al Qaeda, etc., etc., etc.

The report also details how a cabal very high up in the Pentagon and the Vice President’s office got played by a group of shady Iranian exiles in order, as McCaltchy’s John Walcott puts it, to “feed bogus intelligence on Iraq and Iran to senior policymakers in the Bush administration who were eager to oust the Iraqi dictator.”

This meeting was brokered by neo-con All-Star Michael Ledeen, who is now one of those desperately agitating for war with Iran. The story reads like a bad spy novel.

In December of 2001, Ledeen and two Pentagon Iran experts met an Iranian named Manucher Ghorbanifar in Rome. Ghorbanifar sketched out his plan to overthrow the Iranian regime on a cocktail napkin. The plan involved, as the Senate report puts it, “simultaneous disruption of traffic at key intersections leading to Tehran,” which would “create anxiety, work stoppages and other disruptive measures.” Ghorbanifar asked for $5 million in seed money to get started.

This was not the first time Leeden and Ghorbanifar had met. Both are alumni of the Iran-Contra arms scandal. In fact, in 1984, the CIA had said that Ghorbanifar “should be regarded as an intelligence fabricator and a nuisance.”

Operation Desert Gridlock never happened, but Ledeen continued to feed his dubious intelligence to an eager Pentagon, including giving Undersecretary of Defense Douglas Feith a 100-day plan which would provide evidence that Iraqi WMD had been secretly moved to Iran. On this, he was backed up by three Republican senators: Rick Santorum, Jon Kyl and Sam Brownback.

Eventually alarm bells went off in the CIA and State Department and an investigation of the Pentagon’s contacts with Ghorbanifar was started. It was shut down after only one month, however, by Stephen Cambone, then Undersecretary of Defense for Intelligence.

The reaction of Republicans to the Phase II report has been predictable. They’re desperate for the public not to dwell on the truth about this war. And if they can’t present contrary evidence to refute the report (and they can’t, because it doesn’t exist), they can at least sow doubt — acting as if the report is the result of partisan bickering as opposed to the smoking gun of the Bush administration’s tragic acts.

In fact, the committee vote on the report was 10-5, with Republicans Chuck Hagel and Olympia Snow voting with the Democrats.

“It rots the very fiber of democracy when our government is put to these uses,” said Sen. Sheldon Whitehouse in response to the report.

It’s no coincidence that a war built on lies continues to be conducted using lies (“the surge is working”). Mark Green proposes a way to end the cycle of deception: create a Truth and Reconciliation Commission. “This worked in a very different historical situation of South Africa and can work here as well,” wrote Green on HuffPost. “South Africans who engaged in murder and violence were given amnesty if they confessed under oath to their crimes and knowledge — but would be prosecuted if they didn’t…. The largely successful effort led to both truth and reconciliation.”

Richard Clarke echoed Green’s proposal last week, and also suggested something each of us can do: “I just don’t think we can let these people back into polite society and give them jobs on university boards and corporate boards and just let them pretend that nothing ever happened when there are 4,000 Americans dead and 25,000 Americans grievously wounded, and they’ll carry those wounds and suffer all the rest of their lives.”

If the leaders responsible for that suffering are not held accountable — both at the ballot box and by being shamed and shunned as Clarke suggests — we dishonor the sacrifices of the fallen, and make it likely that many more will endure a similar fate.