Truth: Why Bother Anymore in This Nation? 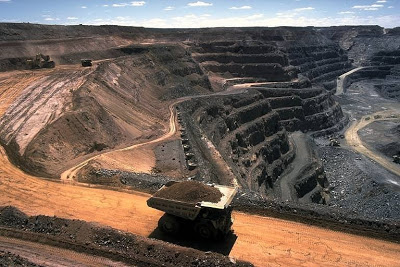 Shut up and drink your high fructose corn syrup, sucker

The devil isn’t evil, he just has lousy PR.

Examples? They are legion. Here’s one the Powers That Be desperately hope you’ll swallow, a nasty piece of marketing gall meant to stab at your intelligence and bitch-slap your intuition, but which is nevertheless being force-fed to you as happy environmental manna, a viciously deformed version of something called “progress.”

Here is “clean coal.” Isn’t it beautiful? Truly, the hell-bound ad agency that coughed up that one even had the nerve to film a commercial featuring Kool and the Gang’s “Celebrate” playing over perky scenes of manic Americans sucking down electricity like John McCain sucks down extra oxygen, claiming that coal is America’s namesake resource and we should therefore kneel before it and worship it like apple pie and horrible sex-ed and Lindsay Lohan’s nipples. Did I mention the coal industry’s PR people are going to hell for this? Count on it.

There is, of course, no such thing as “clean coal.” It’s as impossible as a humanitarian Republican, as insulting as Homeland Security. Even Obama gets it wrong in his support of this lethal oxymoron. There are only two options: Brutally pollutive coal extraction and burning techniques, rapacious strip mining and millions of acres of destroyed forest and contaminated water tables and toxified air and one of the most environmentally destructive energy sources on the planet; or new and slightly less horribly pollutive coal extraction/burn techniques that attempt to rein in a few of the more toxic pollutants, but not including carbon dioxide or, you know, cancer and death. That’s about it.

Translation: “clean coal” is not only one of the most insidious, repugnant oxymorons — right up there with “friendly fire” and “conservative think tank” and “Alaskan teen virgin” — it’s also one of the deadliest.

Not good enough? Don’t you worry.

Here is high-fructose corn syrup. It appears the corporate whiners down at the Corn Refiners Association, unhappy with the billions they’ve already made on the staggering rise of their dreadful product and apparently tired of their gunk getting such a bad rap from every doctor and health mag from here to the Mayo Clinic, have launched a sweet little counter-offensive aimed at proving their goop is, well, slightly less evil than you thought.

Here is their cute little commercial: Two generic moms, one pouring her kids a big, fat glass of bright red HFCS-laden pseudo-juice, as the other frowns and says gosh golly Susan, you feed your kids that crap? That has high fructose corn syrup in it!

And the first irresponsible mom just smiles an ‘oh you stupid bitch’ kind of robotic smile and says hey, HFCS is really no worse than sugar, it’s natural because it’s made from corn, and it’s perfectly OK in moderation, so shut the hell up and drink your nauseating food-colored crap, Marjorie (please note: I might be paraphrasing slightly).

Isn’t that lovely? To be fair, they have a meager point. Despite its highly processed nature, HFCS might very well be exactly as bad for you as plain ol’ sugar (by the way, thanks to the wishy-washy FDA, “natural” is a completely bulls–t term that means nothing; calling HFCS “natural” is like calling Cindy McCain natural). But its manufacture is simply awful, from the tons of pesticides used to grow all that needless industrial corn to the ridiculous and devastating farm subsidies that force farmers to grow far more of it than our country can possibly use.

Which is why HFCS is everywhere and in everything, from soups to whole-grain bread, crackers to ketchup to pickles to tomato paste. Thanks in part to the violent ubiquity of HFCS, bloated Americans now consume a total of 100 pounds of sweetener a year, per capita. Go read your “Omnivore’s Dilemma” or rent the “King Corn” DVD to see just how awful this stuff is. The Corn Refiners Association is praying you don’t.

On it goes. Every major oil company has a pseudo-green, false-front “Let’s take care of our planet” BS campaign underway, whitewashing their evils so insultingly it’s like Dick Cheney wearing a PETA T-shirt to a canned pheasant hunt. Even the king of consumer mediocrity, Microsoft, launched a “Vista: It’s not quite as awful as you’ve heard” campaign to help stifle the low-level groans of 20 million bug-addled users.

And recall, won’t you, a couple of years back, when Wal-Mart launched its own ad campaign to counter all the negative press it was getting about its nasty labor policies, the lawsuits and infractions and claims of forced overtime, even lovely hints of sexism and racism and blurry photos of secret underground lairs where 10,000 paunchy middle managers met to skin live kittens and drink the blood of sweatshop workers and sacrifice their dreams as they chant Shania Twain lyrics in their underwear (again, paraphrasing).

Of course, Wal-Mart, rather than actually improve its policies, instead spent millions to make itself merely look friendlier, touting all the (low-paying, often part-time, generally miserable) jobs they bring in to a community, and gosh, just look how happy those cashiers seem to be, and never you mind the vague threats that if anyone tries to unionize, a pale army of sexless managers will follow you home and kill you in your sleep with this 20-pound tub of cheese-coated popcorn. Mmm, wholesome.

But perhaps none of these examples can top the scabrous GOP, suddenly being repackaged and resold to exhausted, Bush-ravaged Americans as “the maverick party,” with John McCain desperately trying to distance himself from the worst and most abusive administration in a lifetime, all the torture and warmongering and pandering to the religious right, even as he so obviously plans to continue it all.

It’s a rather sickening marketing ploy, made even more contemptible by McCain’s choice of VP, not someone of sharp political acumen who will challenge his decisions and offer insight and inspire confidence, but Sarah Palin, former mayor of a piddling, eyeblink of a pee-stop town in rural Nowheresville, a shrill woman of zero political accomplishment clearly brought on board to lure both confused white women and the hard evangelical right, a minor state governor who thinks Creationism is dandy and who just got her first passport in 2007 and who would happily pass a law to force your daughter to have the baby if she’d been raped. Charming.

Truly, Palin is that most dangerous of self-aggrandizing right-wing politico, a potentially very powerful woman full of moxie and nerve and intensely intolerant, extremist views who actually hates women. Really, you can’t get much more Republican than that.

And lo, in the spirit of Wal-Mart and the Corn Refiners Association and the clean-coal cretins trying to make their rampant evils seem slightly less, well, evil, we humbly offer to McPalin this new marketing slogan: “The Republicans: An entirely new kind of contemptible you hadn’t even thought of yet.”

This entry was posted in RagBlog and tagged Advertising, American Society, Politics. Bookmark the permalink.