Turn Out The Lights — Before The Party’s Over 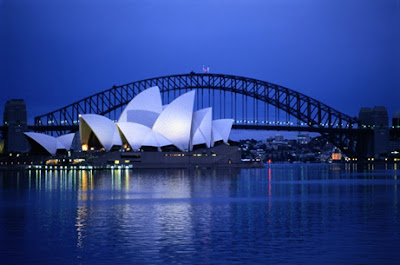 The Sydney Opera House and Harbor Bridge appear at dusk. The Australian city was the site of the first Earth Hour in 2007, in which lights on prominent landmarks were turned off to raise awareness about global warming. Photograph by Sam Abell/NGS
Earth Hour: Cities, Landmarks to Go Dark
By Ker Thanfor / National Geographic News / March 28, 2008

Cities around the world will briefly go dim Saturday evening as the lights of buildings and landmarks are shut off for one hour to raise awareness about climate change. Called Earth Hour, the event is organized by the conservation nonprofit WWF to encourage people to conserve electricity and reduce the greenhouse emissions that cause global warming.

(Get the facts on global warming.)

The response was so strong that WWF decided to take the event global for 2008, said WWF spokesperson Leslie Aun. “We were trying to get a few people to participate, but we ended up getting 2 million people and some 2,500 businesses,” Aun said.

This year, Earth Hour will include 35 official partner cities, as well as dozens of smaller cities spread out across six continents.

Partner cities in the United States include Atlanta, Chicago, Phoenix, and San Francisco. “We have a city in every major U.S. time zone participating,” Aun said.

The event will take place from 8 p.m. to 9 p.m. local time in each time zone.

In the United States, WWF President Carter Roberts sent letters to mayors around the country inviting them to take part.

Earth Hour organizers targeted cities where they felt mayors had shown genuine interest in the environment. Cities with iconic skylines were also preferred, Aun said. “It’s an event that everyone can take part in, but it makes a bigger statement if you can see a few skyscrapers go out,” she said.

Following in that tradition, the lights of major landmarks in participating cities will be turned off for Earth Hour 2008. The Golden Gate Bridge and Bay Bridge in San Francisco will go dark, as will the CNN Tower in Atlanta, the basketball arena in Phoenix, and the Sears Tower and Theater District in Chicago.

“The witch from [the Broadway musical] Wicked is going to come out and wave her wand to turn off the light of the theater there,” Aun said. Individual consumers are also being encouraged to dim their lights for the hour.

Some critics have disputed WWF’s claims that Sydney experienced a 10 percent drop in electricity consumption during Earth Hour last year.

But differences over numbers are beside the point, Aun said. “The point is not to save energy,” she said. “We could turn off the lights of the whole world for an hour, and it wouldn’t really move the needle in terms of making a genuine difference in climate change.

“Instead, Earth Hour is intended to raise awareness about climate change and to get people thinking about what they can do to reduce their energy usage for the coming year,” she said.

When nine o’ clock comes, we hope that’s not the end of this, but really a start in which people are looking at what they can do as citizens of the world,” Aun said. To those who dismiss Earth Hour as just a publicity stunt, Aun responds that so was the Boston Tea Party. “It was a symbolic movement that lit a flame that ultimately led to a revolution,” she said. “We happen to think this is the next revolution, that climate change is the most pressing issue facing our planet today. “

Despite its good intentions, some scientists worry that people will misinterpret the goal of Earth Hour. “It seems to imply that shutting off the lights is the only solution to climate change,” said Gavin Schmidt, a climatologist at NASA’s Goddard Institute for Space Science in New York City.

But Andreas Schmittner, an oceanographer at Oregon State University, said that as long as carbon emissions keep increasing, anything that raises awareness about climate change is a good thing. “We have not gone to any effective measure to reduce those carbon emissions,” Schmittner said. “Until that is achieved, it is good to raise awareness to keep the issue in the public discussion.”

This entry was posted in RagBlog and tagged Energy, Environment, The World. Bookmark the permalink.