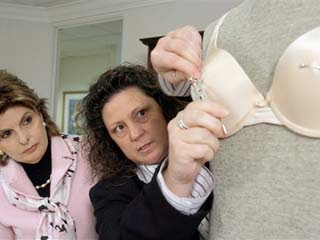 As her attorney Gloria Allred looks on during a news conference in L.A., Mandi Hamlin, (right), demonstrates what she was asked to do by a TSA agent in order to board a plane. Photo by Nick Ut /AP
Nipple rings fall foul of airport check
By Dan Whitcomb / Reuters / March 28, 2008

LOS ANGELES – A woman who claims she was ordered by federal airport screeners to remove her nipple rings with pliers demanded an apology from the U.S. Transportation Security Administration on Thursday.

Mandi Hamlin, 37, also called for an investigation into the February 24 incident in Lubbock, Texas, saying that snickering male agents violated TSA policy by forcing her to remove the jewelry.

“This situation was totally out of control. I will not sit quietly. No one deserves to be treated this way.”

The TSA, a unit of the Department of Homeland Security that was set up after the September 11 attacks on the United States in 2001, said it was investigating the incident but that agents were trained to search people with piercings in “sensitive areas” with dignity and respect.

“TSA is well aware of terrorists’ interest in hiding dangerous items in sensitive areas of the body, therefore we have a duty to the American public to resolve any alarm we discover,” the agency said in a written statement.

The TSA said incidents of female terrorists hiding explosives in “sensitive areas” were on the rise and provided a picture of a “bra bomb” that was used in training its agents.

Allred said the incident began when Hamlin, who has a number of piercings, set off a hand-held metal detector and told a TSA officer that her nipple rings were the problem.

A small group of TSA officers gathered around Hamlin, Allred said, and told her she would have to remove the jewelry from her nipples if she wanted to board her flight.

Hamlin went behind a curtain and removed one of her nipple piercings but could not budge the other, tearfully telling the officers it could not be taken out without pliers, Allred said.

“As Ms. Hamlin struggled to remove the piercing behind the curtain, she could hear a growing number of predominantly male TSA officers snickering in the background,” the attorney said.

Allred said TSA policy called for a pat-down under such circumstances but did not require the piercings to be removed.

This entry was posted in RagBlog and tagged Human Rights, Texas. Bookmark the permalink.