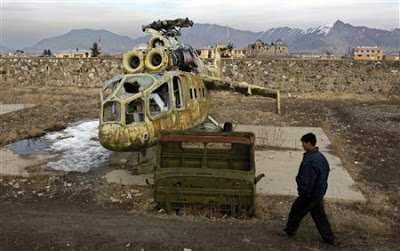 An Afghan boy walks by a destroyed Soviet made helicopter in Kabul in this picture taken February 5, 2009. February 15th marks 20 years since the last Soviet troops withdrew from Afghanistan. Moscow’s forces pulled out of the country in 1989 after a decade of war in which thousands of Soviet soldiers and many more Afghans died.
Photo: REUTERS/Ahmad Masood.
West risks repeating Soviet mistakes in Afghanistan
By Abdul Saboor / February 15, 2009

ALI MARDAN, Afghanistan — The foreign warplanes swooped in just as the Afghan village of Ali Mardan was celebrating a wedding.

Bombs slammed into the crowded village square, killing 30 men, women and children. After the smoke cleared and the dead were buried, all the able-bodied men left alive took up arms against the invaders.

That was 1982 and the warplanes belonged to the Soviet Union, but 20 years after the last Soviet soldier left Afghanistan on Sunday, U.S. and NATO troops are all too often making the same mistakes and could run the same risk of being driven out.

A string of bungled U.S. and NATO air strikes killed 455 Afghan civilians last year, according to the United Nations. Wedding parties seem to be particularly at risk, perhaps due to the crowds of people, some of them firing weapons in the air.

Memories are long in Afghanistan and revenge is a duty.

In the mud-brick homes of Ali Mardan, close to the Afghan capital Kabul, villagers still visit the graves of those killed in the Soviet bombardment and keep photographs of the dead to remind the living of the cruelty of war.

“I was nine years-old. It was early in the morning during my sister’s wedding when the jets bombed us,” said Abdul Bashir.

“You can see I lost one of my eyes, and my teeth. My brother was wounded. My sister, father and my aunt were martyred,” he said. “I can never forget.”

Soviet leaders were at first reluctant to respond to repeated requests from Kabul’s Marxist government to send troops to help quash resistance from rural Islamic fighters, fearing getting bogged down in Afghanistan, just as the British had in the 19th Century.

But on December 25, 1979, hundreds of Soviet tanks rumbled across the border into northern Afghanistan and large numbers of airborne troops landed at Kabul airport.

Despite deploying up to 120,000 soldiers, supported by 300,000 Afghan government forces, the Soviets failed to crush the insurgency by Afghan mujahideen fighters who were backed by U.S. guns and money and had bases inside neighboring Pakistan.

Some 15,000 Soviet troops were killed before Moscow decided the war could not be won and pulled out its forces in 1989. By that time, 1 million Afghans had lost their lives and another 5 million become refugees in neighboring Pakistan and Iran.

The tables are now turned and the United States is considering whether to send another 25,000 troops to add to the nearly 70,000 Western forces locked in a bitter stalemate with Taliban-led insurgents in south and eastern Afghanistan.

“I tell you this for sure, that if NATO and America put all their attention on fighting, and invest only in the military, they will not win,” former mujahideen leader and ex-President Burhanuddin Rabbani told Reuters.

President Barack Obama’s new administration is also planning a large increase in spending on development assistance to Afghanistan, more than seven years after the 2001 U.S.-led invasion of one of the poorest countries in the world.

But the Soviets also tried to bring progress to deeply conservative and traditional Afghanistan and in many ways their record was more impressive than that of the West so far.

Most of Afghanistan’s roads, ministries, major schools and hospitals were Soviet-built. Even now, many of the upper echelons of the civil service, army and police are Soviet trained.

The rows of apartment blocks around Kabul were all built by the Soviets. Though many are now shabby and pock-marked with bullet holes from the civil war, they are still highly prized as no public housing has been built since.

“These residential buildings are the achievement of the Russians,” said Abdul Ghani Rahpore, who lives in one of the blocks. “Now there are 40 countries stationed in this country but they haven’t made any achievements that benefit the people.”

But any gains the Soviets made through development and building the Afghan government’s capacity were scuppered by the resentment and anger their devastating bombing raids caused.

That is a lesson U.S. and NATO forces should learn from the experience of their former Cold War adversary.

“I don’t think NATO has fully understood just how serious this issue is,” said a Kabul-based Western analyst. “They certainly have done what they can to try to avoid civilian casualties from air strikes, but I just don’t think they have grasped how central it is to informing the views of the nation.”

Added Rabbani: “There have already been some mistakes during military operations and the mistakes are continually being repeated. This is the same mistake the Soviets made.”

And there’s this, quite similar analysis: 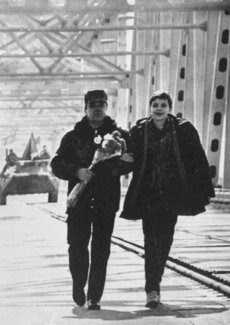 KABUL, Afghanistan — Twenty years to the day after the last Soviet soldier left Afghanistan, Dastagir Arizad ticked off grievances against President Hamid Karzai and the United States that are disturbingly reminiscent of Moscow’s humiliating defeat.

“The problems we are having are made by the Americans. The Americans should review their policies,” he said Saturday. “They should not support the people who are in power.”

As Arizad spoke, Pres. Barack Obama’s special envoy, Richard Holbrooke, was holding his first talks with Karzai in the presidential palace nearby amid mounting U.S.-Afghan tensions fueled by mutual recriminations over the growing Taliban insurgency.

Some Afghan experts are worried that the United States and its NATO allies are making some of the same mistakes that helped the Taliban’s forerunners defeat the Soviet Union after a decade-long occupation that bled the Kremlin treasury, demoralized Moscow’s military and contributed to the Soviet Union’s collapse.

Among the mistakes, these experts said, are relying too heavily on military force, inflicting too many civilian casualties, concentrating too much power in Kabul and tolerating pervasive government corruption.

Violence and ethnic tensions will worsen, they warned, absent a rapid correction in U.S.-led strategy that improves coordination between military operations and stepped up reconstruction, job-training and local good governance programs.

“I see a time when again there could be thousands of unorganized insurgencies around the country,” he cautioned. “The foreigners are the ones who will be targeted. If we don’t bring change here, these kinds of incidents will add to the Taliban insurgency.”

The poll, commissioned by ABC News and the BBC, found that while 90 percent of Afghans oppose the Taliban, less than half view the U.S. favorably, down from 67 percent last year. Twenty-five percent also said they believed that attacks on foreign troops can be justified, up from 17 percent in 2007.

Adm. Mike Mullen, the chairman of the Joint Chiefs of Staff, conceded in a Washington Post opinion article Saturday that the U.S., which is planning to almost double the 32,000-strong U.S. force in Afghanistan over the next 18 months, will lose the war if it can’t win Afghans’ trust.

“We can send more troops. We can kill or capture all the Taliban and al Qaida leaders we can find — and we should. We can clear out havens and shut down the narcotics trade. But until we prove capable, with the help of our allies and Afghan partners, of safeguarding the population, we will never know a peaceful, prosperous Afghanistan,” Mullen wrote. “Lose the people’s trust, and we lose the war.”

A senior official of the NATO-led International Security Assistance Force, who requested anonymity in order to speak more candidly, said that many allied governments would find it harder to keep troops in Afghanistan “if we don’t see some sort of rise in (Afghans’) perception of how things are going . . . within the next 12 months.”

Some Western officials and many Afghans appear to be hoping that Obama, who last week criticized Karzai for being “very detached,” will abandon the Bush administration’s unqualified support for the Afghan leader in hopes that he won’t run for re-election or is defeated in an Aug. 20 vote.

Soviet leaders, however, believed in 1986 that a change in Afghan leadership would stem that decade’s Islamist insurgency. They were wrong.

Of course, there are major differences between the brutal 10-year Soviet occupation that ended on Feb. 14, 1989 — the date it’s marked on the Afghan calendar — and the U.S.-led effort to prevent Afghanistan from reverting to a Taliban-ruled sanctuary for al Qaida.

Moscow invaded to save a dictatorial regime that ignited a rebellion when it tried to force communism on a tribal society that remains rooted in conservative Islam and centuries-old tribal law. Some 1 million Afghans died and more than 5 million fled the country as Soviet and Afghan troops fought U.S.-backed guerrillas based in Pakistan.

The 2001 U.S.-led intervention came after the former Taliban regime refused to surrender Osama bin Laden following the Sept. 11, 2001, attacks. More than 40 nations have deployed a total of 70,000 troops and are spending billions on schools, clinics and roads, while the United Nations is helping to prepare for Afghanistan’s second-ever presidential election.

The effort, however, faces grave uncertainties because the Bush administration, fixated on Iraq, never committed enough troops or developed a comprehensive counter-insurgency strategy for Afghanistan.

Previously secret Soviet documents made public in English for the first time on Saturday reveal that Obama is facing some of the same problems that compelled former Soviet leader Mikhail Gorbachev to order a withdrawal from Afghanistan.

The documents, posted on the George Washington University’s National Security Archive Web site, show that Gorbachev decided in 1985 to end the Soviet occupation after realizing that Moscow couldn’t win a military victory, a point that Obama and senior U.S. commanders repeatedly stress.

“After seven years in Afghanistan, there is not one square kilometer left untouched by a boot of a Soviet soldier. But as soon as they leave a place, the enemy returns and restores it all back the way it used to be,” the late Soviet Army chief Sergei Akhromeyev is quoted as saying in notes from a Nov. 13, 1986, Politburo meeting.

Moreover, the documents indicate, Soviet troops were unable to stop U.S.-backed guerrillas infiltrating from sanctuaries in Pakistan, and they fueled support for the insurgents by killing civilians, factors that are aiding the Taliban today.

“Very little is left of the friendly feelings toward the Soviet people, which existed for decades. Very many people have died, and not all of them were bandits (guerrillas). Not a single problem was solved in favor of the peasants,” then-Soviet Foreign Minister Eduard Shevardnadze reported to the Politburo on Jan. 21, 1987, according to minutes of the meeting. “In essence, (we) waged war against the peasants.”

This entry was posted in RagBlog and tagged Afghanistan, U.S. Foreign Policy, War. Bookmark the permalink.