Violence in Gaza Breaks the Ceasefire 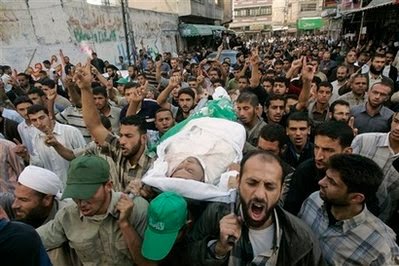 yesterday, while i worked alongside politicos; while americans voted and watched the votes get counted; while the media was consumed with barak obama, the israeli army used its time to commit horrific acts in the gaza strip. by the end of three days, israel will have killed SEVEN palestinians, seized many more and injured dozens.

after a 5 month ceasefire, began by hamas and held despite difficult circumstances, on tuesday the israeli army boldly violated the calm with a series of invasions and air strikes on the gaza strip. palestinian resistance fighters thus responded in kind and launched a series of projectile attacks. this is the first such air strike during the ceasefire.

so what happened on tuesday? israeli military forces, including tanks, invaded deir al-balah, in the central the gaza strip. initial reports indicate that israeli forces were attempting to destroy a tunnel they claim was to be used to abduct an israeli soldier.

while attempting to resist the israeli military advance, six members of hamas’ armed wing, the al-qassam brigades, were killed. the gaza government has named the dead as: 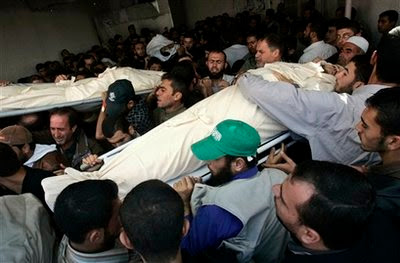 additionally, several other palestinians, including a woman, were injured. some of the injuries were sustained as israeli tanks fired on civilians homes in the deir al-balah area, while others were injured as the results of missiles launched from israeli war planes. these missiles struck in various areas in deir al-balah. during these operations, four israeli occupation soldiers were reportedly injured. 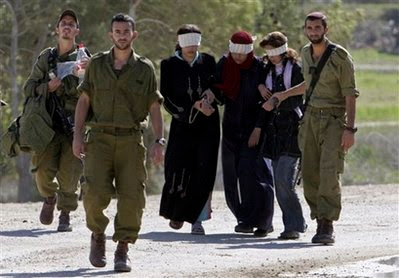 occupation soldiers “escort” three captured palestinian women to the kissufim army base. these women were among those seized from the al-Humeidi family.

some of those taken were named as: Sharihan al-Humeidi, a 22 year old female, her sister, Hanan Hassan, 26, their two brothers Radwan and Nu’man, and the wives of the brothers, Samar Abu Shabab, 19 and Hanin al-Lih, 19.

Source / From Occupied Palestine, with Love