Walter Cronkite and the Meltdown at Three Mile Island 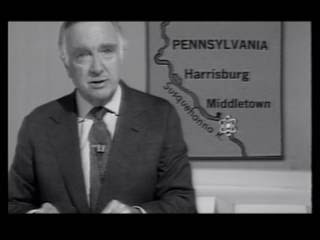 The nation — the world — cannot afford more Three Mile Islands, especially now that Walter Cronkite is no longer around to report on them.

See Video of Walter Cronkite reporting on Three Mile Island, Below.
The accolades are still pouring in for departed anchorman Walter Cronkite. Few mention his critical “that’s the way it is” reporting on the atomic meltdown at Three Mile Island. Yet Cronkite and TMI are at the core of today’s de facto moratorium on new reactor construction — which the industry’s new champion, Senator Lamar Alexander, now wants to reverse through the proposed federal Climate Bill.

Technicians who knew what was happening shook with terror as Cronkite opened his March 28, 1979, newscast with “the world has never known a day quite like today. It faced the considerable uncertainties and dangers of the worst nuclear power plant accident of the Atomic Age. And the horror tonight is that it could get much worse…”

Cronkite went on to say that “experts” had [wrongly] ruled out the possibility of an explosion. In the ensuing weeks and years, he did not report what remains one of the most heavily censored secrets of the nuclear age — that significant radioactive fallout did escape from TMI, that it scattered randomly throughout the region, that it landed heavily on certain parts of the downwind population, and that human beings (as well as wild and farm animals) were killed and maimed in great numbers.

Cronkite was also not quite accurate in characterizing the TMI melt-down as potentially the worst reactor disaster in US history. On October 5, 1966, human error led to a coolant stoppage at the Fermi Fast Breeder Reactor in Monroe, Michigan, 45 miles south of Detroit. Highly volatile liquid sodium could have exploded, releasing apocalyptic quantities of radiation that would have quickly killed thousands of people and permanently poisoned most or all of the Great Lakes, the world’s largest bodies of fresh water. For a full month area law enforcement weighed the possibility of evacuating Detroit.

Like TMI, it’s not definitively known how much radiation was released at Fermi, where it went, or who was harmed. Experts still debate why these two accidents weren’t even worse, and how the nation barely avoided these radioactive mega-bullets.

There were innumerable technical differences between the two disasters. One was cost: Fermi became a $100 million pile of radioactive rubble, whereas TMI, thirteen years later, was priced at $900 million to build, and about $2 billion as a liability.

But thanks in part to Cronkite, there was also a gigantic gap in news coverage. Fermi got virtually none. I was Editorial Director of the University of Michigan Daily at the time, and Ann Arbor correspondent for Time Magazine and the United Press International. But neither I nor any of my fellow journalists — including at least one other wire service reporter — heard a peep about this accident, which stretched through the entire month of our senior year just 40 miles away, and could have killed us all.

I finally did learn about the Fermi catastrophe in 1974 — eight years later — while reading John G. Fuller’s We Almost Lost Detroit, published by the Reader’s Digest Press. In hair-raising detail, Fuller reported on the horrifying story of an entire industry’s incompetence, dishonor, fallout and cover-up.

In the ensuing five years, thousands of grassroots citizens marched on proposed reactor sites from Seabrook, New Hampshire to Diablo Canyon, California — as well as Middletown, Pennsylvania. The mass demonstrations and arrests spawned global news coverage that moved debate over atomic energy into the mainstream. It also prompted the Jane Fonda-Michael Douglas-Jack Lemon Hollywood thriller, The China Syndrome. With eerie accuracy, the movie predicted many technical aspects of what actually happened at TMI — most of which had been deemed “impossible” by the industry’s expensive “experts” and apologists. When it was released within hours of the actual accident, it helped blast coverage all the way to the lead of Cronkite’s CBS Evening News.

By 1979 the nuclear industry was — like today — on the financial ropes. Despite decades of expensive “too cheap to meter” media hype, the “Peaceful Atom” was absurdly expensive and technologically untenable. All orders placed prior to TMI would ultimately be cancelled for a combination of economic, technical and political reasons. It is no exaggeration to say the No Nukes movement helped cancel scores of reactors.

But the essential unworkability of atomic power is what prompted the citizen’s movement to stop it. Today’s industry has surmounted virtually none of its core challenges, starting with its complete 50-year failure to solve its radioactive waste problem, and carrying through its inability to secure private financing or liability insurance for new construction.

Today’s “renaissance” is built on the hope of huge government subsidies, collective public amnesia, and three decades of the Big Lie that “no one was harmed” by the massive, unmonitored radiation releases at TMI. To this day there has been no public hearing to compensate some 2400 central Pennsylvania families who by the early 1980s claimed bodily harm and death from the plant’s fallout.

None of that made it to Cronkite’s Evening News. Though he became an ardent proponent of nuclear disarmament, the true story of what happened to TMI’s downwinders has never cracked the corporate media.

Nor is it certain that the story of another meltdown today would be fully told. Before the mass No Nukes demonstrations and TMI, the networks might have claimed innocent ignorance. Cronkite had the integrity and clout to break through to the American heartland on that all-important first night.

Today’s nuke-powered Big Lie machine has never been more powerful. Though a few cable reporters might cover the story, only the internet could be counted to carry the load, with high-paid deniers swarming over every independent blog. A TMI-scale meltdown would instantly evoke a horde of media locusts intent on devouring all coverage and dismissing all health and safety concerns. Their ultimate goal: to protect the massive economic investments in a technology that has long-since become human history’s most expensive technological failure.

How effective they might be remains to hopefully never be seen.

But as you read this, the industry has again poured into Congress, this time targeting the Climate Bill. Sen. Lamar Alexander (R-TN) has called for a “Sense of Congress” resolution to be attached to it that would endorse a doubling of the US reactor fleet — with 100 new plants — along with at least $50 billion in loan guarantees to make it happen. My next report will cover these efforts in greater detail.

But as the backroom horse-trading escalates, it is critical that calls start pouring into Congress. The nation — the world — cannot afford more Three Mile Islands, especially now that Walter Cronkite is no longer around to report on them.

[Harvey Wasserman’s SOLARTOPIA is at www.solartopia.org. He is Senior Editor of www.freepress.org, where this article also appears.]